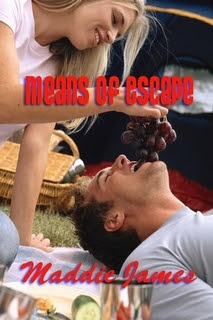 I'm thrilled to let you know that the release of my next book, Means of Escape, will be here before you know it!

This one was long coming. Let me give you a little history on this book. Originally, it was published in 1999 acquired by a publisher I trusted -- the person who acquired it I admired completely -- but then her company went into partnership with another and before you knew it, things went downhill from there. The book was published, yes, and I think it sold maybe 5 copies and I received about a buck-98 in royalties.

And then life happened.

This was all about 2000 -- seven years ago! I can't believe it when I think about it. I got a new job, my kids grew up, I got married again, I got divorced again, I started over...again. And somewhere in there, I forgot to write. I think I even forgot that I am a writer! That went on for about 4 years. Then sometime after my last divorce and after my daughter finally moved out (with baby...oh, did I tell you I became a grandma in all that, too?) the muse started tickling at me again. And I thought, I need to be a writer again.

Afterall, I had six print books published and a plethora of non-fiction published. I am a writer, I told myself. So go write.

It took a while. I had to build back networks. Join writer groups. Find the time. Balance the job and the grandma gig. I had to even dig up the old stuff, find it, snatch it off old Mac disks and figure out how to get them into my PC. (still working on that one) And write new stuff.

Means of Escape is a book of my heart. I loved writing it. I love the setting. I love the characters. And I love that it will now be back on the shelf.

I've added my book video here, so check it out! I'll be posting more about this release, you can be certain, in the coming couple of months! (see...I really want you to go out and buy it.)