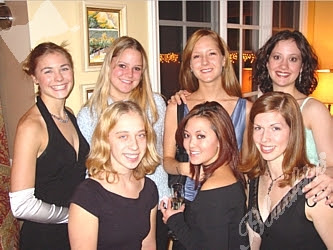 See the girl far left? She dances. And yes, her name is Maddie James.

I don't run track, either. Or show horses. Nor do I have a karaoke-type video up on UTube. But all those other Maddie James, do.

I'll admit it. Maddie James isn't my real name. Duh. Go figure. A lot of authors use pen names, right? Not unusual. I'm often asked how I came up with mine and people are usually disappointed by the response. Some authors come up with their pen names by doing fun and quirky things like rearranging the letters of their name and their husbands, or cool things like combining their children's names, or using the name of their dog and the name of the street they grew up on. I didn't do any of those things. My editor at the time (Ann LaFarge at Kensington) and I literally sat down and clicked through some random lists of pen names I came up with and finally settled on one that wasn't either too ethnic or to old-sounding or too young-sounding or whathaveyou. We settled on Maddie James and I was fine with that.

My mother, I remember, was rather taken aback, but that is another story.

This July, while at RWA, another author looked at me, looked at me again, did a double-take from face to name badge, face to name badge, and then finally said... "I'm sorry, but you aren't the Maddie James I know, but you could be!" So, evidently there is a woman in Boston who owns my name, too, and looks like me, as well. I think her words were, "If she were here, she would be you." Too funny. Particularly since it's not my real name.

And then, have you ever stopped to consider, how many romance authors there are out there with the last name of James? A couple of us joked lately that we should do a James Gang blog. According to the RWA website, there are 8 of us: Arlene, Elle, Eloisa, Judith, Maddie, Marcia, Sally and Samantha. Poor Arlene and Judith, they are missing their twins. (Elle and Eloisa; Maddie and Marcia; Sally and Samantha) The reason I know this is that first, Marcia James pointed it out to me and then secondly, in a discussion with one of my crit partners today, I mentioned that if I ever wrote erotica I might take a new pen name, Madeleine James. And her reply: "Do you know how many romance authors there are out there with the name James?"

That is when it hit home. So, if I ever decide to write erotica, I will not use the name James. I will use the name of my mother's dog (Missy) and pair it with the name of my street (Curry) and be done with it. Missy Curry. There. Beautiful. Love it. Ugh.

I'll just be Maddie. To hell with it. Even though I don't dance or run track or sing on UTube. I'll just write romance. And live happily-ever-after. Under an assumed name.

maddie
Posted by Maddie James
Email ThisBlogThis!Share to TwitterShare to FacebookShare to Pinterest

LOL Maddie! Indeed it sounds like romance incognito. Hope you're having a great day!

Maddie -- don't you just love writing those fun capital J's when signing your pen name? ;-) I picked my pen name by putting my real first name together with my husband's first name -- as a way to honor his contributions to my writing career. Of course, there is also the fun of writing those fancy capital J's! ;-D

Have a great day!
-- Marcia James

Marcia. Yes! There is just something about a J. My real last name begins with J, too, and I've always liked that. M is a very good letter, too. And K. Almost everyone's name in my immediate family starts with K. I do think we get connected to our letters sometimes...

Thanks for stopping by!