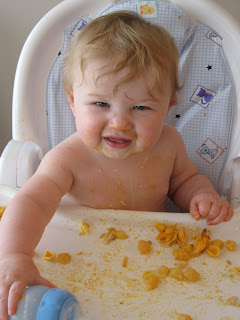 Never give a baby ramen noodles. I’m here to tell you, it is not a good plan.

My grandson came to visit yesterday and ended up spending the night. Cute little booger that he is, I was not prepared for his visit. Okay, so let’s say that Grandma has been rather self-absorbed in her own life for the moment and hadn’t been to the grocery for a while. I mean, I can exist on ramen noodles in various forms. Ramen noodles and frozen peas make a great quick soup. Ramen noodles cooked and then tossed with stir-fried veggies make a great quick and hearty oriental meal. Ramen noodles sautéed with butter and olive oil and tossed with soy sauce (or Worcestershire) make a great crisp topping to soups and casseroles or a salad. They are good to munch on alone, too.

Ramen noodles can be great for many things. They stink as baby food.

(Okay, so those aren't ramen noodles in the pic above, but I did not have time to snatch a photo of the real ramen noodle disaster, so just imagine this, times 4. Or 5. That is my grandson, however...)

My grandson is all of 14 ½ months old. He’s a bruiser and he eats with his fists. What I mean is, he “fists up” food in the palm of his hand and shoves it in his face. Both hands. Mile a minute. Non-stop.

This is in such stark contrast to his two older sisters, who, when eating would gingerly pick up a noodle or a cheerio with a dainty pincer grasp (thumb and forefinger) and carefully move it toward their dainty mouths and slowly chew.

Not so, this boy. Fist, shove, gulp. That is his mantra.
The poor baby ended up spending the night and (since I’m heading out on several weeklong business trips in a row beginning tomorrow) I’d not been to the store. No milk. No bread. No eggs. I’d used up everything and was just “making do” until time to leave early, early, early tomorrow morning. I had nothing for him to eat for breakfast.

Well, I did have other things in the house. Frozen broccoli, refried beans, long-cooking oatmeal, a can of corn, green chilies, black beans, and a bucket of frozen margarita mix in the freezer. Um, none of those would work. I decided the ramen noodles would be safe until his Mama came to claim him in a couple of hours.

I was wrong. Never, EVER, give ramen noodles to a baby. After a while, when fisted up like he does, they dissolve into a mish-mash-mush that gets caked into hair, eyes, nostrils, and into the diaper (somehow, I can’t explain that one). His shirt was soaked. His pajama bottoms. The high chair was covered. The floor was slick with noodle-goo. And all I could do was pick the poor child up, carefully hoist his 30 pound body (yes, he’s a big one) and head for the tub while dialing my daughter and asking how quickly she was coming—the baby was hungry and the ramen noodles didn’t work.

She didn’t question that. She just came. And after stripping and washing up (him, not me), he was fine.

But then there was the high chair. And the floor. All I could do was take it outside (chair, not floor) and run the hose over it. The floor needs a good mopping. And me…I just need a nap and it’s only noon.

Maddie,
This ones hilarious. I rolled when I read it. I have an almost three year old grandson myself. I well know what a mess they make. lol.

Oh my! LOL We eat Ramen noodles a lot around here. I was always too scared to give it to my daughter when she was that little. I could see the mess in my mind.

Did Grandma learn her lesson? hehe!

Okay you guys, so grandma, or Mimi as she is called, is OUT OF PRACTICE in the baby department. I mean, my "baby" is 22 years old. Who knew that I would need to recall mommy skills when I became a Mimi? For some reason those skills have just flown out of my head. Yes, Ms. Taryn, I learned my lesson. He gets toast from now on. :) Babies are hard work? I would not trade places with my daughter for the world -- oh, wait, but I was there once upon a time, wasn't I? uh, yeah.

Hehehe! If its any consolation my mom lost her mommy skills too. When my daughter was a little thing, my mom would hand her back to me and tell me she needed her diaper changed or say she didn't know what to do for her. But then my mom hadn't really dealt with kids since me and my sister were little.

In some ways though I think that's the rite of passage. What's that saying? If I'd known grandkids were so much fun, I would've had them first.

Grandmothers aren't bound by the rules. Just spoil them and send them home to mommy. ;o)