M. L. Cordle is one of my author friends at Resplendence Publishing. I'm priviledged to share a release month with her for her debut novel, Silencing Sarah. So today I'm featuring M.L. and Sarah as my featured guests.

You can find out more about Silencing Sarah, now available for purchase, at http://www.resplendencepublishing.com/

To find out more about M.L., visit her author page at Resplendene Publishing here.

I'm ML Cordle and I have a debut novel that I'd like to tell you about!

Silencing Sarah is a romantic suspense that fits under the Dazzle line of Resplendence books. It is a bit of a psychological thriller but has plenty of sexual tension for those of you who like that chemistry! It's a story that took me eight weeks to write initially, and the first draft was met with favorable feedback from a literary agent who wanted me to cut it in half for marketing purposes. Well, I didn't want to (it was my baby!) but I spent the next few months doing so. About the time I was ready to resubmit, I came across Resplendence Publishing, liked what I saw and queried them. Long story short, here I am and the book is less than half of what it originally was, which is a good thing.

It is still a big book but I think it has a big story and, so far, the reader reviews have been fabulous. I do hope that you will visit http://www.mlcordle.com/ and check out some excerpts of Silencing Sarah and perhaps order your e-book today!

And while I'm here guestblogging, I'd like to say that you have remarkable taste if you are a regular visitor of Maddie's blogs. She's just the greatest! I hope that you will check out her soon-to-be released novel, Blue. This one sounds just as intriguing, just as captivating as The Curse! I'm so priviledged to be associated with Maddie, and with the other fine Resplendence authors! You can't go wrong with a Resplendence gem so I ask you to visit all the authors' sites (see Maddie's top friends at MySpace http://www.myspace.com/paprbackriter and the Resplendence Publishing) and get to know them yourself. Wonderful people and fantastic writers.

I have included below, a short blurb for Silencing Sarah and an excerpt for your reading enjoyment. And I hope to be hearing from you soon! 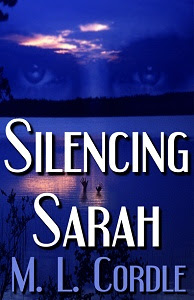 When Madison Owens left her rural hometown in southwest Virginia to pursue her goal of becoming a writer, she never imagined that she would become a best-selling novelist and marry the man of her dreams. But she soon learns that dreams can turn into nightmares, and when something seems too good to be true, it usually is. Divorced, heartbroken, and suffering from a major case of writer’s block, Madison returns to Virginia with plans to renovate her grandparent’s rustic cabin and create the sanctuary she so desperately needs.

Will McGomery is a man in hiding. After his wife’s suicide and the suspicious drowning death of a young local girl and family friend, Sarah Chambers, Will wants nothing more than to be left alone. The plot of land and cabin he purchased from the Owens family seemed to be the ideal place to escape the demons of his past, to live a quiet, simple life of solitude, and to silence the ghost who haunts him. But when a nosy, beautiful author shows up on his land claiming it as her own and stubbornly refusing to leave until he answers her questions about the past, Will knows that his quiet existence is at an end.

Although she knows she should heed Will’s warnings and stay out of his life, Madison can’t escape her growing attraction to the mysterious recluse. Her writer’s imagination is awakened by his story, just as her body is awakened by his touch. In her determination to sort out the truth from the lies, Madison wades into a quagmire of painful secrets, where no one is above suspicion and betrayal lies around every corner. Thoroughly embroiled in the mystery of Sarah Chamber’s death and her growing obsession with Will McGomery, Madison will invest everything—her heart and her life—in her quest to silence Sarah.

Will imagined the cursed stillness that descended as a prelude to his seizures was like being on a darkened stage awaiting curtain call.

Hi didn’t know what horror awaited him on the other side of this curtain, but knew he had to be ready to face it. When the velvet wall parted, it was time to lock and load, no bowing out.
An audience would never laud his appearance; he knew this. No crowd of spectators existed, only a stage, and scenes from the realm of the dead.

Only the dead themselves.

He was merely the observer.

Reaching out to brace himself against the wall, he thought of Madison. He had wanted to stop her from leaving, but as she’d cut across the backyard toward the front of the cabin, her hair flaming like a halo around her head in the burnt red of the sinking sun, he had sensed the change in him. An eerie quiet had closed in, clasped him like a slumbering lover, and he’d made his way quickly to the house.

His fingertips curled into the painted sheet rock along the hallway. It felt insubstantial, like he’d pushed his fingers into a huge belly, but when he focused on the wall, he saw that his mind was playing tricks on him. It wasn’t yielding to the trembling pressure of his fingers at all.

He withdrew his hand, pressed his back to the wall and slid down to the floor. The roaring had started in his ears now. Like the surf, and yet it wasn’t. It was the racket of his erratic brain waves, a sound that would ratchet up in its intensity before fading to a dull hum.

He pinched his eyelids together, but there was no commitment in the delicate muscles that would keep them closed and they drifted back open. In that second while he’d been submerged in the complete darkness of the stage behind closed eyes, it had happened. The curtain had split, invisible ghost hands raising the veil of his subconscious withzealous fervor.

He was about to take in act two, or three…or five hundred. He simply knew it was a familiar scene, one in which he was a silent watcher, an unwilling witness with eyes that could not look away.

Molly stood in their bedroom within the house that no longer existed, the house that had burned to the ground years ago. On the bed was a book, an ancient looking thing with faded gold lettering across the front.

The letters, though worn, were exquisitely rendered, tall and slanted like ornate etchings in an Egyptian tomb.

His vision acute, he saw the word plainly from where he sat. He would not be able to see his own hands if he was to raise them to his face, but he saw those seven letters with laser clarity. A lump formed in his throat because he knew what came next.

Molly crossed to the bed and snatched the book up, flipped through it frantically. Her fingers faltered and she almost dropped it.

Her fear was like a bat caught in her throat, squeaking, shrilling.

It was awful. He wanted it to stop. He wanted to tell her it was okay. He would fix it. He would take it back, this deed that had compelled her to end her life.

He knew, however, that it was impossible to take anything back.

"My name," she said, fingers crumpling the pages as they savagely turned them one after another after another. "It’s never here. My name isn’t here. Where’s my name?"

Something was behind him, always behind him in this room. He could hear it breathing now, above the dissonant roar, a moist guttural wheezing. He couldn’t turn to see what it was, though. He could only see what was before him, understood that this was, in part, because he was locked in a seizure, for all purposes dead to the tangible, the drifting lost.

He tried to speak but his tongue was a frightened soldier hiding behind the wall of his teeth. Molly hurled the book across the room and instantly, her image dissipated like delicate sand moldings in water.

But instead of his own astral departure from the room, he remained.

This was something different. This felt totally wrong and very ominous.

The book skidded on its spine, falling open at the spot where his feet would be if he were in his body. Among lines and lines of names on the revealed page, one stood out to him; it shone an ethereal blue, like the sky in spring.

I don't know what the book Bequeathed was for or why Molly kept trying to find her name in it, or why Sarah Chambers name was, but I want to know!!! LOL

Have a great day!

Y'all got to read silencing sarah! its the greatest!!! I loved the book!! can't wait till the next one comes out!

Hey, thanks so much guys! Stacey, you know I'm totally thrilled that you loved Silencing Sarah, and Taryn, I hope you'll pick up a copy and let me know what you think! Hope you have a great weekend ladies!