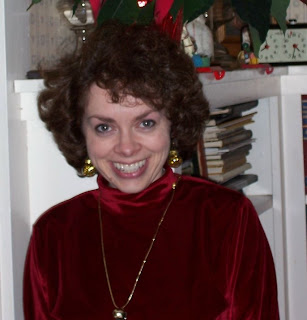 Magdalena Scott is one of my four sisterwriters who I've collaborated with to create a number of stories about the town of Legend, TN and its characters. Today let's learn a little bit more about Magdalena.

MJ: Tell us a little about yourself.

M: I’m a newly published author, and even though “the call” arrived last summer, I’m still giddy about it at times. Like many others I’ve read about, I’ve been writing since birth. It took me a very, very long time to get brave enough to send anything to a publisher, though. I mostly write contemporary romance, and for lack of a better term you could call my stories “sweet,” because they’re pretty G-rated.

In my other, “real” life, I’m a wife-mother-daughter-niece-cousin-friend-employee. Again, pretty much like everyone else, I struggle to find a balance between the writing life and daily demands like, say, laundry and preparing meals.

MJ: You have a new book coming out. We’d love to hear about it.

We contracted with Resplendence Publishing for the anthology, LADIES OF LEGEND: FINDING HOME. It’s available . My novella is called IN LEGEND, TN. In case anyone in the world doesn’t already know this, the other three stories were written by my SisterWriters – Janet Eaves, Jan Scarbrough, and -- Maddie James! 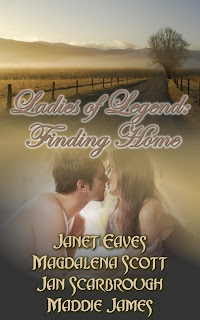 My heroine, Midnight Shelby, after an ugly divorce, and then losing her job, shops on the Internet for a town in which she can start over. She finds Legend, , by way of the McClain Realty website, and is enchanted with a large brick building on the town’s main street. There’s a virtual tour, but other than that, she buys the building sight unseen and heads out of – away from the big city, big corporate life that she now sees as meaningless for her.

Legend is a neat little town with lots of wonderful people, but the economy is suffering. opens her shop, The Emporium, which showcases and sells locally created arts and crafts. She enlists the help of tech whiz Daniel McClain to create a stronger web presence for the town of and its unique shops. That’s just the beginning of Market Legend – the revitalization plan she and some other local business women devise. Daniel is the thirteen-year-old son of realtor Martin McClain, whose roots in Legend are important to him. Martin is wary of outsiders’ motivations, and even though he’s attracted to tall, beautiful , he finds it difficult to trust her.

I’ll leave it at that, but of course you know, since this is a romance, there’s a happy ending. I live for the happy endings!

We’re doing a Legend Launch Party all through December, so anyone who’s even remotely interested in reading the anthology (which is excellent) should pre-order the e-book version at

Purchasers will automatically be entered in the drawing for one of the four $25 gift certificates to an e-commerce site. Yay! Shopping online for yourself, and potentially, others as well. (But you can’t buy a large brick building in Legend, TN on this e-commerce site. Sorry. Legend is a fictional town.)

MJ: What do you love about your editor?

M: She’s excellent. I’ve read horror stories about editors who didn’t understand grammar or punctuation, wanted to change the author’s voice, or basically strove to re-write the story. Aack! I’m blessed to have an editor who, as far as I can see, does everything well, including the all-important gentle nudging to show me how things can be improved. I went through first round edits gritting my teeth part of the time, but when I looked back Ir realized how much Courtney had helped the flow of the story.

M: I recently contracted with Resplendence for my first full-length solo novel, THE BLANK BOOK. The heroine is Alice Williams, a 40-year-old “good girl” widow, who has always lived in a tiny town in . Robert Diamond is a Harrison Ford-type movie actor whose career has hit the skids. This unlikely pair is brought together by a novel begins to write in the leather blank book she obtains at the local Friends of the Library sale. It should be fun to try fiction instead of the articles she writes and sells to women’s magazines, right? But doesn’t realize she’s literally writing the Story of Her Life. She becomes consumed by the tale, and then Robert is sucked into it -- and into her little town -- as well. Their attraction to each other, both on and off the page, won’t be denied. But their differing backgrounds create sparks between them, and raise eyebrows in this little town where gossip is everybody’s hobby, and “dull” is a compliment. Alice and Robert just want to learn how The Blank Book is controlling them, so they can put an end to it and get back to their regularly scheduled lives. Or do they?

M: Becoming a mother. What an incredible roller coaster ride this has been! My son is a teenager now. What, besides parenting a teenager, can make you look at your life and think, “WOW, how great is this?” one moment, and “WOW, I’ve aged ten years in the last three” the next? My hope is that, in a few years when he’s out of college and fabulously successful in his career, he can spring for some Botox treatments for yours truly.

Come visit me at

Thank you SO MUCH for letting me do this interview. It was lots of fun! Hope that picture of me isn't too scary for people. It was the only holiday-ish picture I had. I did manage to crop it so that the poinsettia on the book shelf doesn't seem to be a hat, the way it did in the original.

But back to Legend - where the SisterWriters always go when we need a retreat...and where we hope readers will want to go, too -- with the anthology, and with future Legend books to be announced later!

Magdalena- your stories sound so intriguing! Can't wait to hear about more of them!

Hey there! Thanks for the encouragement. Guess what I should be doing right now? Edits on THE BLANK BOOK. Yikes! Going to have to sit myself down...oh, I am sitting down...going to have to close the internet browser and do some work. Hm.

Or maybe I could just minimize the internet browser and do some work?

Magdalena,
Your story sounds like fun. Glad you girls decided to write the anthology. Can't wait for it to be released!!

Thanks for checking out the interview! I hope you'll like the stories when they come out.

I can't wait either!

Magdalena, I'm honored to have your interview grace my blog. Thanks so much for allowing me to interview and for sharing about your books. I can't wait for The Blank Book to come out so I can read it! I've only read bits and pieces, so am looking forward to flipping those pages and reading from front to back!

I'm looking forward to reading LADIES OF LEGEND. As for motherhood, you're much braver than I! I had two wonderful stepdaughters that were half grown by the time I entered their lives. No diapers or interrupted sleep for me!

Hi there! Long time no correspond!

You went through the teenage years with two girls? And you call ME brave?!?

I'm thankful for Legend, my home away from home.