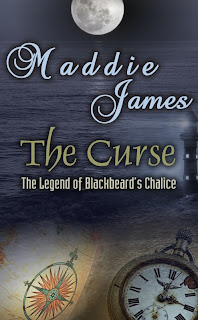 "I felt as if I lived every thrilling moment of THE CURSE. Maddie James writes pulse-pounding suspense and riveting romance!"

James' novel delivers a lovely romantic tale about true love and sacrifice…a pleasing story that will have readers ready for the next installment. ~ 3 Stars. Romantic Times Reviews

The Curse is one fast-paced book…a page turner…an intriguing story. Maddie James creates an astounding read that held me captivated to the end. This is a series I am most anxious to read and add to my bookshelf. ~ 4 cups. Coffee Time Romance

Readers beware, for The Curse is one story you cannot miss! I applaud Ms. James’ vivid imagination and her exceptional ability to weave her flavor into this enchanting nautical legend. Romance, action and pirates, this story has it all! I look forward to reading this author’s future book offerings and cannot wait to see what adventures are in store in book two of her series. Joyfully Reviewed

Available now in print on Amazon.com

Book One in The Legend of Blackbeard's Chalice series...

Jack Porter is in hot pursuit of his kidnapped wife. Not an easy feat considering it is 1718 and the kidnapper is the notorious pirate, Edward Teach aka. Blackbeard. Determined to rescue his wife, Hannah, and take the pirate’s head in the process, Jack sneaks aboard the pirate’s ship but is too late. Hannah dies in his arms.

Nearly 300 years later, Claire Winslow vacations on a secluded east coast island, where the image of a man walking the misty shore haunts her. Then he comes to her one night, kisses her, and disappears. The next night they make love and he tells her his name is Jack. But did they really make love? Or was it a dream? And why did he call her Hannah?

The Curse sends Jack and Claire on a wild search through time for a powerful historical artifact – the silver-plated chalice made from Blackbeard’s skull. This chalice holds the key to their destiny and their love. Only with the chalice will they be able to reverse Blackbeard’s Curse.

Will they find it in time? Or are they destined to be parted by fate once more?

My copy of The Curse is on it's way from Amazon as I type. I can't wait to get it!

Hi Maddie,
I'm excited for you. :D I hope your book does really well.

Thanks you guys! I do appreciate it. Taryn, I hope you like Curse! It is one of those "books of my heart." And thanks James for the tag!