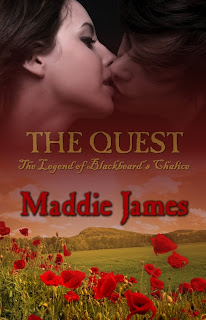 Wow! I love getting new covers! I thought I'd show off my new cover for THE QUEST. This is book three in The Legend of Blackbeard's Chalice series. I'm so excited. The cover artist really captured my ideas in her artwork. Isn't it lovely?

This book is due out in a couple of months. I'll keep you posted. In the meantime, here's a brief synopsis of the story.

The Legend of Blackbeard's Chalice continues....

A night rhapsody is a series of disconnected and often extravagant visions and images, gathered and composed over time, manifesting themselves within the subconscious—and sometimes, the conscious. Jackson Porter has experienced these night rhapsodies throughout his entire life. Karina Upton has been plagued with them, as well. These shared visions are the only things that connect them, even though Kari resides in the politically-charged 21st century, and , in the 18th.

is a man driven by a need to fulfill his mother, Claire Winslow Porter’s, dying request. He seeks answers about the origins of his life as well as the imaginary lover who has haunted his nights for years. At his mother’s deathbed he is challenged to meet his fate. His future, she says, lies in a place called , even though it is miles and centuries away from his barrier island home in 1745. The land is his legacy and by rights, should he desire to seek it out, belongs to him. She urges him to see the circle complete, to move toward his destiny.

In the year 2032, Kari is driven by a need to fight federal sanctions and stay-the-course on her political aspirations to save her land and her crops. She admits, even if only to herself, that her upcoming marriage is one of convenience. Marrying Tye Gentry will save her farmland in these unstable political times. She sees no other way to gain power than to marry Tye and ride on his and his father, Richard Gentry’s coattails all the way to the Capitol Rotunda.

But upsets the plan when he time-travels forward and bursts into Kari’s world in the middle of her wedding. Frightened by the fact that the literal “man of her dreams” has come to life in front of her, she emotionally turns tale and runs – but not before she hides him away in a secret chamber of her home before Tye and Richard can kill him.

Hey Maddie! Saw this earlier today. LOVE LOVE LOVE the cover and the synopsis! (tried to post on myspace, but it's all messed up).

See, I'm getting ready to head over to amazon to grab The Cult and Ladies of Legend...think I've waited long enough...can't stand it! LOL

Thanks, Taryn! I certainly hope you enjoy!

Wow, great cover, Maddie. This book is going to fly off the shelves.
Kisses
Lyn
xoxo