Wow! THE CURSE is a bestseller!

I just wanted to bubble up and share that my book THE CURSE, book one in The Legend of Blackbeard's Chalice series, now sits at number 1 on Resplendence Publishings print book bestseller list.

Here is a brief excerpt from the story. 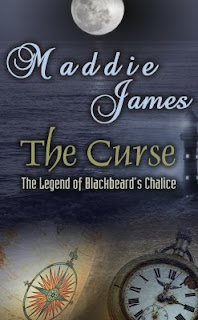 Chapter two. Claire has just stepped into a small, out of the way, pirate tourist shop in Ocracoke Village.

She set out on a slow amble around the shop. She fingered shells and poked at hermit crabs clinging to their cage walls, and browsed through a section of local books written about the area. Many of them on the subject of the pirate Blackbeard. She perused pirate eye-patches and Jolly Roger flags and toy swords and the like. Finally, she settled in a corner near the back of the shop where she met with an assortment of interesting artifacts.

A skull sitting atop a black velvet pedestal instantly gave her the creeps.

“It’s not real but it looks good, don’t it?” The deep voice came from her left. Out of the shadows walked a man who looked closer to being an actual pirate that anyone she’d ever seen in real life. Scruffy around the edges, time-worn face with weathered wrinkles, and a voice as gruff as sandpaper. Large man. He reached to touch the skull with hands that had seen more of their share of sun and sea.

She edged back. “Yes. It does look real.”

He moved nearer, cautiously it seemed, and eyed her closely as he did so. “Blackbeard lost his head, you know, in a battle at sea. They never found it. Or so they say.”

He nodded, caressing the skull’s smooth top. “Some say it is still out there somewhere.” Claire looked up and took in the man’s far away stare and the upturned smirk of one corner of his mouth. Then he looked back at her. “What brings ya to the sea, lass?”

That Elizabethan inflection was deeply pronounced in this man. A local. Generations old, she was certain. And the ‘lass’ reference disturbed her for some reason. She wasn’t quite sure why.

Her gaze met his. “Just vacationing. Staying up the island a bit.”

He raked his fingers over the stubble of his chin and cocked his head to the left. “You’re at the old lightkeeper’s cottage?”

She nearly lied, finding no reason to tell this man where she was staying, but then relaxed. Why lie? She would be gone tomorrow. And this peaceful little town, she couldn’t imagine anything dangerous happening here.

“Yes, that’s where I’m staying. I rather like it there.”

He chuckled. “Haven’t seen the likes of ol’ Jack, have you now?”

Claire froze, not sure she could find her voice. Could that be…is his name…? “Um… No.” She shook her head. “I haven’t seen much of anyone.”

A deep belly laughed escaped him them. “Lass, so you have seen him. I can tell by the look on your face. I thought he’d be about. It’s the moon, you know. It’s a blue one coming up. Second full moon this month. Seems to bring poor Jack’s spirit out looking for his Hannah about that time.”

He leaned closer. “Don’t worry. He won’t hurt you. He’s just looking for his dead wife. Been stalking that beach for a few hundred yours now mourning her. All he wants is his Hannah back. Too bad your name ain’t Hannah, ‘cause you’re a comely lass and I bet he’d like you.”

Claire swallowed and bit her lower lip. Her gaze never left his, somehow momentarily lost in their depths. What did this man know? Who was he?

He pulled back and squinted at her. “You’re sure, lass?

Hastily, she nodded. “And I haven’t seen him. Really.” She backed away, suddenly very eager to get the hell out of that dark corner. “I need to be going now. Thank you for…"

For what? For scaring the shit out of her?

“Be safe, lass. Helluva storm coming in. Be safe.”

Storm. Everyone keeps talking about the storm.

She had other more important things to worry about than a stupid storm. Like the fact that she just might have kissed a ghost last night.

THE CURSE is available at Amazon

And right now, it's on sale!
Posted by Maddie James
Email ThisBlogThis!Share to TwitterShare to FacebookShare to Pinterest