A changed identity, a secluded island, a... 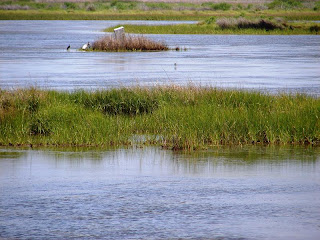 Groaning, Meg squirmed against him and he had to fight the urges stirring within his groin again. “Meg?”

She pulled back and her eyelids fluttered open.

“Hi,” he softly answered, smiling back. “You okay?”

She nodded and her eyes searched his face. “I’m wonderful. You?”

Meg kissed him back. “Do we need to leave now?”

Rising up on one elbow, Smyth glanced at the late afternoon sky.

“I don’t wanna.” Meg buried deeper into the blanket. “I want to spend the night on the beach. You and me. Under the stars. Like you said.”

“Meg,” he whispered, ducking beneath the blanket himself. He found her face and tipped it up to his, her eyes wide and dark in the shade of the blanket. “I want to take you home. Make love to you in my bed. Sleep all night with you in my arms.”

She nodded and tilted her face up to plant a moist kiss on his lips.

Dusk fell rapidly as they crossed the dunes and headed into the village. Twilight twinkled with an orange glow as the sun raced lower in the western sky over the sound. As they walked arm in arm toward Smyth’s house, an incredible peace washed over Meg and she felt contentedly happy.

She could see the radiance in Smyth’s eyes when he looked at her and she wondered if he saw the same in hers. Meg knew, without a shadow of a doubt, that she saw love in his face. And she felt it from the deepest recesses of her own heart. For now, she didn’t intend to let anything spoil her happiness. Nothing.

She decided early today that there would be no more talk of Bradford and her previous life while she was here with Smyth. She’d found a bit of paradise and wanted to enjoy it while she could.

“Actually, I’m starved. I was trying to think what we’ve got at home to fix for dinner. You know, when I came over this time, I really wasn’t thinking about dinners for two. I hope you don’t mind, I usually just heat up some soup, fix a sandwich, or something.”

Meg linked her arm a little tighter with his. “You know I don’t mind. Whatever you’ve got will be fine. Should we go back and get more food?”

Smyth stopped and looked at her, a puzzled expression on her face.

“Depends on how long you think you’re going to stay.”

Searching his face, Meg spoke softly. “Depends on how long you want me.”

One corner of Smyth’s mouth turned up in a devilish grin. “Then I guess I better get the radio working. I may need to call the ferry over sometime next week. We’ll be okay until then.”

As they sauntered down the sand-gravel road toward his house, he tucked her close into his body. She loved the feel of him next to her. It was all so perfect, his attitude so matter-of-fact as though he wanted her to stay forever. And right now, she didn’t think she’d ever want to leave.

What the coming night might bring filled her with anticipation.

A shrill hum sliced unnaturally through the air. Puffs of gravel dust ripped up several feet in front of her. Meg stopped short and turned a questioning look at Smyth. The second one hit, zinging through the air and striking very close to Smyth’s right foot. The realization, however confusing, suddenly hit both of them.

“Get down!” Smyth grabbed Meg and threw her toward the side of the road, pushing her under a stand of scrub pines. He covered her body with his. “Don’t move!”

Her pulse pounded in her ears. “What’s happening?”

Smyth placed a silencing finger on her lips. He didn’t want to frighten her, but at the same time she needed to know the truth, as uncanny and as impossible as it all sounded.

Panic burst up inside her. She wanted to scream. Her worst nightmares materialized right in front of her. Her voice conveyed her terror. “But you said we were the only people here, the only people on the island,” she choked out.

Smyth pulled her further under the trees and waited for night to fall. It was their only chance.

“Obviously, I was wrong.”

Wow! Great excerpt! It's doing its job-making me want to read it.

Great excerpt, Maddie. Sexy and suspenseful at the same time. Let's be friends on my space. Jean

Hey Maddie,
Another terrific excerpt! And the pictures are so pretty. I just love the Carolinas.
I began reading your Red: A Seduction tale last night. Me likey. :)
Renee

Hi Jennifer! So glad you stopped by. I'm glad you liked the excerpt. So then, my job here is done. LOL

by the way, do you have a release date yet?

Hi Jean. I'd love to be your MySpace friend! I'll hope on over and see if I can find you. :)

Thanks so much for stopping by.

I am sooo in love with the Outer Banks. Escape is my third book set on the islands. I am so landlocked here and I miss the ocean terribly. But oh well, I just have to get myself out there, don't I? Hm, wanna go?

I'm glad you like Red. I had fun writing that story!