Dance with me? Today's Excerpt from A Perfect Escape 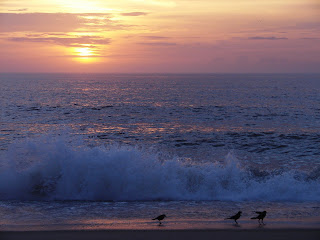 The moon bathed them in muted light as they silently crossed the weathered wood and entered the privacy of the gazebo. Meg immediately smiled, pulled her arm from his grasp and went to the opposite side of the eight-sided structure. She leaned against the railing for several minutes, closing her eyes to the rhythmic slap of water against the pilings and the faint throbbing of music from the bar. The delicate breeze off the sound washed over her as she became aware of Smyth standing beside her.

Opening her eyes, she bodily turned toward him. “Thank you,” she whispered.

He plunged his hands deep in his trouser pockets. With his shirt collar open and his hair suddenly disheveled, he looked so much more natural now. And much more comfortable. “Yes,” she returned softly. “I like it very much.”

Smyth’s face broke into a grin. Turning back toward the sound, she braced one hand on the post beside her and leaned into it. Lights from the restaurant bounced off the dark waves to her left, twinkling in the reflection. How peaceful. She closed her eyes as he moved closer to her. Listening, she almost thought she could hear the ocean.

“You know,” she told Smyth a moment later, breaking the night’s silence, “it’s strange. The sound is so calm, but across that thin ribbon of sand behind us, the ocean rages. I thought a minute ago I could hear it.”

“I can understand that,” he replied slowly, watching her face. “The same thing is going on inside me.”

And me. Startled at both his reply and her thought, Meg looked at him.

“Sh...” his finger found her lips, silencing the question that hadn’t yet made it to her tongue. “Listen,” he whispered. “You can hear it.”

His eyes held hers spellbound for a moment as she listened. His hand dropped to her waist, lingering there, and Meg found herself turning into him.

“Listen,” he repeated, as soft as the night breeze.

Meg did, and within seconds, whether her own imagination or the ocean, she heard breakers crashing against the shore. Or something raging inside him? Her?

“Amazing,” she whispered, searching his face.

“The land is very narrow here,” he explained quietly. “It’s not so uncommon in places. You just have to be very quiet and listen.”

Hesitantly, Meg placed a hand on his chest. “And inside here?” she questioned softly. His eyes widened with something she dared not question as her hand lay heavy on his chest. Did she chance going on?

“Is this just a facade? A thin, calm veneer covering some frenzy inside?”

Who are you, Smyth Parker?

It took him several minutes to answer. Minutes spent searching her face, playing over her features. Meg watched him, his hesitation confirming his internal struggle. Did he possess demons as awful as hers?

“Perhaps,” he finally answered. “But sometimes I think...looking at you is like looking into a mirror. I see the same things reflected back at me.” He broke away and turned toward the sound, leaning into the railing. Meg watched him, her back against the post. A myriad of emotions slid over his face. He knew so much, yet so little. As did she.

After a moment he turned back to face her. “Dance with me?” He held out his hand. Confused, Meg stared at his open palm. had been like this, so charming, so romantic. He’d swept her off her feet and she hadn’t landed for six months. But after the wedding...

Could she risk this?

Her heart beat erratically in her chest, her blood thrummed in her veins. After a second’s pause, she looked back into his face and took his hand.

“There’s no music,” she whispered as he pulled her closer.

He chuckled softly. “Oh, yes there is, can’t you hear it? Listen.”

Again, he placed a finger on her lips. His other arm circled her waist and their bodies met. “Listen,” he repeated in a hushed voice. “The music is all around us.”

And as though it really were, their bodies swayed to the invisible rhythm. Smyth’s finger drew down the side of her face and Meg trembled. He was too close. As his hand slipped to her back, he drew her closer still until her head rested on his shoulder and he dipped his beside hers. Her eyes closed. She lost herself in the moment, the power of their closeness. She felt their breathing slide in sync as they leaned one way then the other. As one.

All at once, as if the music stopped, they stood still. Sighing, Meg opened her eyes and shifted slightly away from him. Both his hands left her back and went to her face, lifting it to his. When their eyes met, she saw the desire on his face. As his lips lowered, Meg thought of all the reasons why she shouldn’t let him kiss her. And as his lips brushed against hers, sending sweet ecstasy down to her toes, she silently thanked her weak side that she hadn’t listened.