The Monte Carlo and The Food Network

Right now, Rachel Ray is on the tube. She's making something Cajun with hot sauce and beer and shrimp. Her vegetable is crispy green beans, sweet and spicy and smoky all at the same time, she says. Yum.

Okay, so I'm addicted to watching The Food Network. It is my weekend show. I think I like it so much because, a) I like food and b) I like trying out new recipes and c) I really do like to cook, and d) I can have it on in the background while doing other things. Sometimes I switch back and forth between The Food Network and The Learning Channel and HGTV and once in a while, A&E. But largely, TFN is where my channel selector likes to rest.

I also think that watching people cook food relaxes and de-stresses me. Food is a basic thing but oh-so-important to our daily life. When I cook, I am relaxed. I like that and I NEED that in my life. There is enough stress with the other parts of my life. This, the cooking, I can control and be creative with.

I mentioned several days ago that I visited The Monte Carlo Steakhouse in Albuquerque recently. It was a great restaurant and I wouldn't have know about it had I not been watching The Food Network one Sunday afternoon--even though I am a frequent visitor to Albuquerque. So I told my friends all about it and we sought it out. Had we not have known what to look for, we would have easily missed it. Why? Because the restaurant is actually tucked in the back of a liquor store! But once you get there, you realize you've found what you were looking for. I've already blogged about the meals, so take a look at my previous post about the Monte Carlo.

While I'm waiting for my entre, I glance up and viola! Who do I see but.... 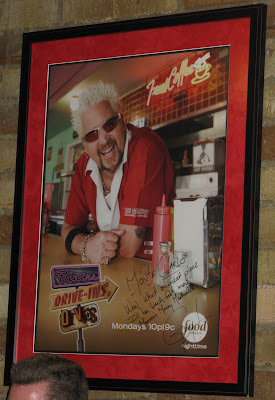 No, not the man, but his autographed poster on the wall. Guy was a former winner of The Next Food Network Star and has three shows right now on the network. Diners, Drive-ins and Dives is one of my favorites. No...Guy's Big Bite is a favorite, too. Oh well, let's just say he's entertaining and his recipes are great! You can read more about Guy here http://www.guyfieri.com

Funny thing about this picture. Once I spy it, I lean in on the table with my camera to take a picture. See the guy's head in the lower lefthand corner? My friends who are with me start to snicker and I take the camera away from my eye. The guy edged closer to his girlfriend/wife/girl-he-was-with to give her a smooch. They were cheesing for the camera, thinking I was taking a picture of them! I think they were a mite disappointed when I said, "Oh, I don't want you, I want a picture of the picture."

Oh well. Should they have a show on The Food Network in the future, I might one day take a picture of them, too.
Posted by Maddie James
Email ThisBlogThis!Share to TwitterShare to FacebookShare to Pinterest
Labels: restaurants