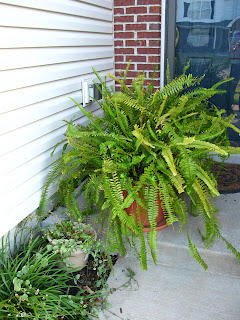 Hello. I'm Fern. And this is my summer place.

I've been living with Maddie for over four years. I first met her at KMart and evidently there was something about me she liked, because she picked me over all the other Bostonians in the lot.

I beckoned and we connected. She took me home.

But that was before we lived here. You see, we lived in one other house together before this place. It was smaller and a townhouse and I lived on the back deck. Then, Maddie told me that we were moving, just before the winter months were to set in, and she decided (I am forever thankful) to winter me and not let me die.

So I did. Wintered. Didn't die. Shed some leaves but grew a lot. The next spring, as soon as the temperatures were well into the 50's on a consistent basis, I came to my summer place, here. I like this summer place. I'm sheltered from the harsh sun and get plenty of humidity because, well, it's humid here near the river.

Now, as you can see, I'm rather large. I've been repotted once, last fall, and grew accustomed to my new larger pot with minimal effort. You might say, I bloomed. Although as we all know, Bostons don't bloom. We frond.

I heard that Maddie, after having wintered me for three years now, was contemplating letting me meet the Big Frond Guy in the Sky, because (gasp) she was wondering whether she wanted to vacuum up my dropped leaves over the winter. I also heard, that her dear friend Magdalena, actually gasped in horror when Maddie mentioned it, so obviously she felt guilty and decided then and there to do whatever it took to prepare me for winter.

So this afternoon, she debugged and despidered me, and let me hang out under the sprinkler, and then trimmed back all my scaly fronds, and the ones that were near molting stage, and brought me inside.

Ahhhhh. What a relief. Here is my wintering place. 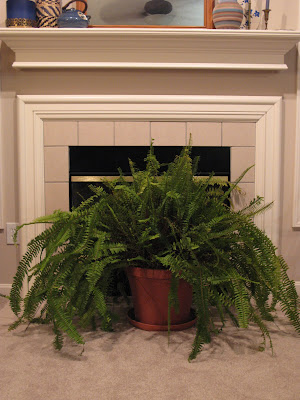 Yes, I know. I am big. Almost as wide as the fireplace. Of course, I'm sure Maddie will move me should she start a fire. Fronds are NOT fireproof. 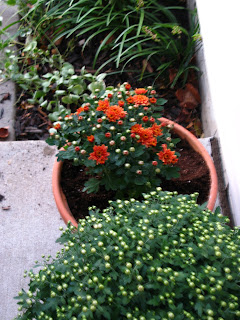 I suppose Maddie now felt her porch looked bare so she headed out to the neighborhood garden center and picked up a couple of flowers -- some Mum and her kid, I think I heard her say. But they'll never replace me. No. Because I'll always be bigger and well, I know deep down that Maddie is no plant killer.

Besides, this is MY summer place. No Mums allowed.

Maddie did a great job on your trim. You are beautiful!

(Psst! You haven't noticed any plastic fruits or veggies sneaking into the house, have you? Might want to watch out for that.)

Thank you, Magdalena! I am forever indebted to you. I could have been rotting plant matter in another month.

Oh! Maddie's grandson was here earlier in the day, and was carrying around...are you ready for this? ...a plastic tomato and an orange! Fake.

She resisted the urge to photograph.

I hate to admit I have killed many a plant. Neglect. It is a slow way to die with lots of suffering, I'm sure. I hope the plant gods don't smite me.

I try not to kill plants and have some that are pushing 10 years old! But you never know, sometimes they just don't adjust to changes, etc., and kick the bucket. Probably not your fault, Jennifer!