An upcoming release from Mia Jae 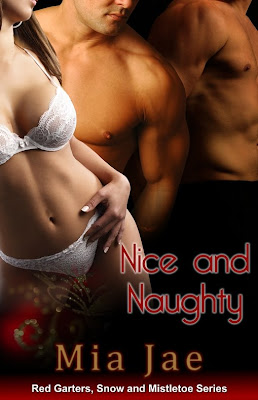 So, whaddya think of this cover, sports fans?

Mia Jae has her debut release coming from Resplendence Publishing this month and I thought I'd post her new cover here.

Here is the blurb for her story:

Cassie Franklin has to prove herself. After all, she's the first female head of the English department at the university. But that doesn't mean she has to prove herself sexually to Eric (English Lit 101 and Shakespeare) does it? And surely he doesn't realize that she is SexyProf on the Instant Messenger. Does he?

Then there is Ryan. Strong and sexy and with hands that can ease away the tension of most any job. He almost makes her forget her risky escapades with Eric.

Until she realizes that Ryan and Eric are roommates, and partners... And that the couple has picked her, for their girl.

Nice and Naughty is part of the Red Garters, Snow and Mistletoe Series published by Resplendence Publishing. Look for other titles by Demi Alex, Catrina Calloway, and Tia Fanning. To be released in November, 2008

11.12.2008 Update! Mia's website is now live! You can visit her here for an excerpt.
Posted by Maddie James
Email ThisBlogThis!Share to TwitterShare to FacebookShare to Pinterest
Labels: Books