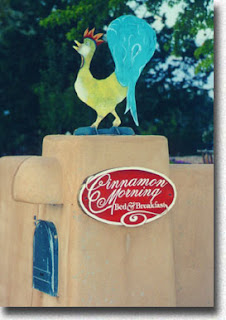 I'm having coffee this morning. Nothing unusual about that. But this morning, my coffee is flavored with a hint of cinnamon and I believe, this is the perfect start to my day. It feels like a treat but I plan to make it a daily treat.

You see, last week, while on a business trip to Albuquerque, I stayed at the Cinnamon Morning Bed and Breakfast on Rio Grande. I'd stayed there once before this past summer, in one of their casitas. This time I stayed in the main house and upon rising, was immediately struck with a remembrance.

I loved the cinnamon coffee I had here before.

Funny, I'd not thought about it until the smell of the brew hit me in the face when I entered the kitchen.

So I asked Sue, the proprietress of the establishment, how she made her coffee. Cinnamon sticks, she said, broken up on the coffee. A good grade of coffee. And oh, I get my cinnamon in Mexico. It's softer. Hmmmm.... I don't get to Mexico often. In fact, I've only been to Mexico once. But how...? Or, she added, find a Mexican market in your area.

Yes. I can do that! There are a number of Mexican markets where my daughter lives.

Now, I need to get to a market. This IS my new favorite coffee.

How do you like your coffee in the morning?
Posted by Maddie James
Email ThisBlogThis!Share to TwitterShare to FacebookShare to Pinterest
Labels: travel

How do I like my coffee? Let me count the ways...

1. HOT. I fill my mug with water and heat it in the microwave, then pour out the water and pour in the coffee. It doesn't cool down quickly. Mmm.
2. SMOOTH. I like a breakfast blend in the morning.
3. NOT SPILLED ON MY WHITE ROBE. Really, is that too much to ask?

Hey! Good trick about the "mug in the microwave." Never though of that! I tend to drink it whether it is hot, cold, lukewarm, one day old, etc...

Have I mentioned I like, no, NEED my caffeine lately!

I don't have to worry about a white robe but occasionally I find these little drips on my carpet that turn brown over time and I wonder....

I'm a tea girl myself with Splenda and milk in the mug first with two bags of tea. When I pour the hot water from the whistling kettle, it makes it a bit frothy. I sometimes will snag a cup of my husband's coffee. He grinds up the beans into a fine, fine dust before putting them in the coffee maker. It makes the coffee very strong.

So, cinnamon coffee and special muffins. I think maybe Kyowa should plan a road trip.

Road trip! Yes, of course! I'll bake! I'll make cinnamon coffee! I'll even clean my guest bedroom! I think we should have a sleepover!!!!!

Or, I could drag by butt your way once in a while, too, eh?

By the way, is Dogwood on this year? I'm assuming so?