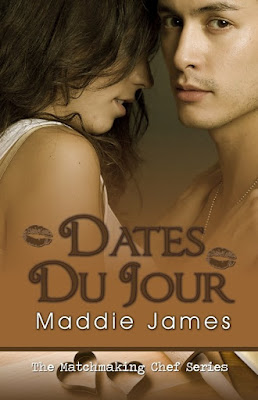 I love Tuesdays. Why? Because on Tuesdays, new releases come up on the Resplendence Publishing Web site. And guess what? This Tuesday, I have another release!

Dates du Jour is the third novella in my Matchmaking Chef series. Here is the blurb.

Speed dating? Speed eating is more like it. When Suzie sets up lunch date after lunch date for Lyssa Larkin, Legend’s homegrown homecoming queen of 1992, she knows she’s about bit off more than she can chew. Lyssa inspects and rejects her dates in two bites and then sends them on their way. Suzie wonders if she really wants to date or just eat two lunches, and worries that soon Lyssa’s hips won’t fit on her dainty chairs.

That is, until Suzie takes a risk with a man the exact opposite of what Lyssa describes as “perfect for her.” A man that Lyssa knows, but doesn't know, and is falling for her hard and fast. Suzie just can't help but work some of her matchmaking magic behind the scenes....

Like it so far? How about a short excerpt?

He had to say that the view that met him upon re-entering the dining room at Legend’s Landing Bed & Breakfast was spectacular. Of course, he wasn’t referring to the lovely fall scene out the large picture window that framed in all her glory, while providing him with a glimpse of .

No. That wasn’t the view, at all, that he was very much enjoying.

She was perched on all fours, her round derriere, clad in those hip-hugging black slacks he’d admired earlier, swayed back and forth before him. Taunting. She placed one forearm flat on the floor and stretched forward to retrieve something, it appeared, from underneath an old, antique china cabinet. The clearance could only be a few inches off the floor. He angled his head to the right as she maneuvered herself even closer to the piece of furniture while laying her cheek flush against the plank flooring and peering into the depths beyond.

“Oh, come on you…” the woman muttered.

A long, brunette ponytail swished to the floor over her shoulder.

Mack brought a hand to his chin, ran his fingers over the stubble there, and smirked. He could stand here, well, forever, and watch this, but perhaps he should do something to help.

“Almost, got you…” She wiggled her ass again, and for another moment, he cocked his head to the side just to watch.

No. No need to rush this. Correct?

A little bit of mischievous boy raced through him. Retrieving his cell phone, he punched in a few words and pressed send. A muffled, “BadadadaDA!” sounded from beneath the cabinet.

“Dammit!” Lyssa sputtered. She flipped her body to lie on the floor, her right hip against the wood, and her right arm squeezing between wood and floor.

Mack watched. He should really stop this.

“Come on you bastard…” she whispered.

She had a bit of spunk. He liked that. Looked like she’d gotten rid of her headache.

Of course, he should have told her earlier who he was, but it was just too much fun keeping her in the dark.

Finally, she hooked her finger into the thing she was retrieving and he watched as she pulled a small purse, complete with dust bunnies, out from beneath the cabinet. She jerked up and sat on her knees—her back still to him—and dug into the pouch.

Out came the cell. She punched buttons and searched.

“Mack,” she exhaled his name on a breath.

He ticked off the messages in his head. Phone call. Voice mail. Three text messages. One email. All of them basically saying the same thing.

Except for the last one which said…

Lyssa stared at the last text message from Mack and shook her head. Nice ass? What?

Then the thing BadadadaDA-ed! again, and another message flashed.

Her body did just that—slowly—while her heart thudded in her chest. As she rotated backward, she observed the entire scenario in slow motion—the picture window, the small table with remnants of her second lunch with what’s his name, a mahogany sideboard, some picture on the wall, and…a man.

The slow motion skidded to a stop.

Her gaze met him first at denim-clad knees, traveled downward slightly to a pair of worn brown loafers, then moved upward over thighs that filled out those denim jeans rather nicely…as was his pelvis area, filled out nicely, she noticed…then upward to a stocky chest adorned with a snug-fitting black t-shirt, covered by a dark brown leather blazer, and then…

Her gaze met his face. Correction. Smiling, scruffy face. He had nice crinkles around the corners of his mouth, a hint of a five o’clock shadow, and green eyes that met hers and held with a twinkling of excitement.

Dates du Jour is available now in ebook format only at Resplendence Publishing!

What? You somehow missed books 1 and 2? Well, we can remedy that. Click the following links for more information on Perfectly Matched (book one) and Hot Crossed Buns (book two). Both books are also available at Fictionwise.
Posted by Maddie James
Email ThisBlogThis!Share to TwitterShare to FacebookShare to Pinterest
Labels: Books

Thanks, Jennifer. How are you doing lately?

Congratulations on the latest release! Wishing you tons of sales!

Great excerpt, Maddie.
I so want to visit a B&B in the Smokies.
Best!

Thanks Devon, Susan and Aleka for stopping by!

Susan, how are you? Been a while and I need to stop by your blog!!!

Aleka, sounds like a good writer's retreat. Why don't you drive north and I'll drive south and meet you partway in the middle?