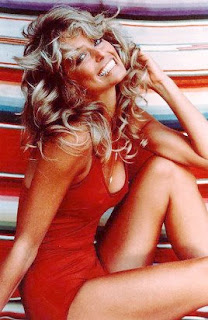 What can you say about a 62-year-old woman who died? That she was beautiful and brilliant. And that once upon a time, America was in love with her. Scratch that. America is still in love with her.

Actress Farrah Fawcett died today from her nearly three year battle with cancer. Recently, she went public with a documentary of her battle, feeling a strong desire to let others know how cancer grips and takes hold, and how a body deals with the disease, emotionally and physically.

Farrah became a household name in the 70's--I remember it so well, being a child of the 70's myself--with her layered blonde hair style, flashing smile, and that famed poster of her in the red swimsuit. If all of that wasn't enough to thrust her into stardom, the hit television show Charlie's Angels, sealed the deal.

I also remember very well a movie she stared in titled The Burning Bed. The movie was about domestic violence and was possibly a risk for her to do at the time. Nothing glamourous about it at all--a movie about a battered woman who could take no more of her husband's abuse and burned him alive in their bed--and one for which she was nominated for an Emmy.

Farrah had her shares of joys and struggles, even before her diagnosis of cancer, not unlike many American icons who have come and gone before her, or who will come after. And even though her life and legacy can be summed up with so much more depth that the classic pinup poster to the right, this image is likely the one of her that will forever remain with us.

Through many of those struggles, the man by Farrah's side was actor Ryan O'Neal, the love of her life and the father of her son. They never married, though Ryan said he had asked her many times. It was reported earlier this week that he said they would marry as soon as Farrah was stronger. In recent years, Ryan had been her rock. I can only imagine his pain today.

But why write about Farrah today in this column, one dedicated to the romance novel? Because a long, long time ago, I read a book called Love Story by Erich Segal. It was, indeed, a love story. I was a barely a teenager then, moody, emotional, and constantly looking for love, or fearful that I would never find love. I read the book and then, I watched the movie. The emotion and power of the story was overwhelming. I cried. Uncontrollably. My heart breaking for the young actor in the starring role.

You see, Love Story was a story about a young man in love with a woman--a woman who had cancer. It was the story in which the young woman, actress Ali McGraw spoke the words, "Love means never having to say you're sorry." It was also the story which began with these words, "What can you say about a twenty-five year old girl who died? That she was beautiful and brilliant. That she loved Mozart and Bach. The Beatles. And me."

The "me" in that movie was actor Ryan O'Neal.

All those years ago, I cried for that young man in the movie. I felt his pain. I felt the loss of the love the couple shared. And I prayed that should I ever find a love so powerful, it would not die on me. Yet, of course, I know that happens every single day to someone.

Today, it happened to Ryan O'Neal in real life. He lost the love of his life. Another love story came to an end. And again, I cried.

Cross-posted from Maddie's column on Examiner.com

More coverage on the death of Farrah Fawcett