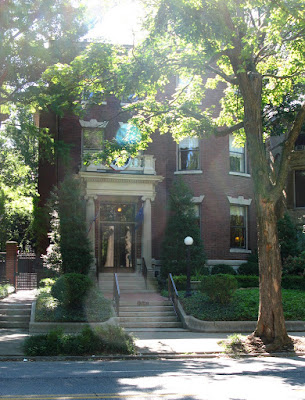 Thanks to all who came by to play yesterday, hunting for ghostly orbs in my pictures. Jennifer, Magdalena, Kris, Wendy, Fran and Bronwyn -- you all had great responses!

No, my lens didn't need to be cleaned because I used the same lens on all of the pictures. The sun, well, perhaps it was shining right at me so maybe the orbs could be attributed to sun spots. But...I don't know about that. I took several pictures from that same spot.

I think it was great fun, though, that many of you spotted things I didn't! Like, Wendy noticed that only one tree is blowing in the 4th Street Live pic. And several of you saw images in windows or doors that I didn't see. Eeek!

I do have to say, though, that Jennifer gave me a little scare when she said she thought the spirits might be hanging around the picture with the handprints of Pat Day. I had to think about that one a little. I kept thinking...Pat Day is still around, isn't he? Why would spirits be hanging around him unless is was, um, gone?

It bugged me all day.

All day long I’m thinking that he must have died sometime when I was out of town. And then I’d think, no, surely he isn’t dead, that she didn’t mean that… But it kept nagging at me a little and I just wondered. Then later in the day I went to the local post office to get a PO box. I’m standing in line and there is this teeny little man standing in front of me. I’m thinking jockey right away (remember, I live in horse country). Being the Amazon women that I am, I felt like I was just TOWERING over him. He had the tiniest little butt and I swear, his head could have fit under my breasts. I mean, with him standing straight up. Not that I would WANT him under my breasts, that’s just about to where he would come. Anyway, he had a letter in his hand. He moved it around. I glanced at it. I was sure the return address name started with a P. So now I’m thinking… this is PAT DAY!!! He's still here! And then I think, well, no, probably not. Then, he steps up to the guy at the counter, and they talk, and I hear the clerk say, “Have a good afternoon, MR. DAY!”

So, now, I’m for sure now that he’s not in spirit. This was all too weird!

Anyway...since all of you did such a fabulous job of spotting spirits, everyone gets an ebook of your choice! Take a look at my available titles in the left side bar and send me an email at maddie.james@insightbb.com, and I'll return a copy to you.

Oh! that reminds me. My two latest releases are not on that slide show yet, do remember that Dates du Jour and The Quest, are also available.

Thanks, ladies!
Posted by Maddie James
Email ThisBlogThis!Share to TwitterShare to FacebookShare to Pinterest
Labels: Life

okay, Dates and Quest are now on the slideshow! duh. :) Enjoy!