An excerpt from Dates du Jour 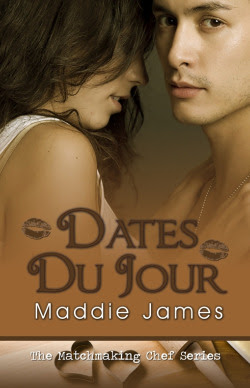 Speed dating? Speed eating is more like it. When Suzie sets up lunch date after lunch date for Lyssa Larkin, Legend's homegrown homecoming queen of 1992, she knows she's about bit off more than she can chew. Lyssa inspects and rejects her dates in two bites and then sends them on their way. Suzie wonders if she really wants to date or just eat two lunches, and worries that soon Lyssa's hips won't fit on her dainty chairs.

That is, until Suzie takes a risk with a man the exact opposite of what Lyssa describes as "perfect for her." A man that Lyssa knows, but doesn't know, and is falling for her hard and fast. Suzie just can't help but work some of her matchmaking magic behind the scenes....

“Lord. I think I might just marry the first man who pops his head into Sugar High, just so I can get a divorce and get it over with.”

Lyssa Larkin daubed at the sugar rim gracing her upper lip and dipped a cinnamon-powdered doughnut into her heavily-creamed coffee one last time. Sydney Schul, owner of Sydney’s Sugar High Coffee Stop and Bakery, frowned and watched Lyssa dunk, dunk, dunk the thing and then lean gingerly over the coffee cup. Her long brunette pony tail slid over her shoulder while she stuffed the rest into her mouth.

“Your chin,” she said. Lyssa nodded and swiped again. “And why would you want to go and do something like that?”

Lyssa rolled her big brown eyes. “I’m an old maid, Sydney. And no one wants an old maid. Men expect that a thirty-six-year-old woman has had some experience with men. Most men assume that you’ve already been married and divorced by my age. Had kids even. Me? I’ve only had sex with two men and have never been married, no kids, and no stinking divorce!

“I’m nothing. And men just don’t understand that. They wonder what is wrong with me.”

“There is nothing wrong with you, Lyssa. You’re beautiful, smart, and a catch.”

“Tell that to the guys who look at you cross-eyed when you say you’ve never been married.”

“That’s ridiculous. Women older than you marry for the first time all the time!”

“Maybe in the big cities. But Sydney, this is Legend. Population 6,232. Small, southern, Bible-belt and all that. It’s weird here.”

“Let me get this straight.” Sydney braced herself against the counter, her palms flat on the Formica top. “You’re out to get married just so you can get a divorce? How very Bible-beltish of you.”

She shrugged and reached for another sugared treat.

Sydney put her palm over her hand. “That’s three. Don’t you think…?”

Lyssa’s baby brown’s narrowed and Sydney jerked her hand back. “Listen to what I am saying. I don’t have sex, Sydney. I don’t drink. I don’t smoke pot or do drugs. I don’t even drink diet soda laced with artificial sweetener, although some would say that I should. So let me have the damned doughnut, you hear me?”

Sydney nodded. She would give her that.

The bell over the bakery door tinkled and she glanced away from the sugar-coated disaster. Sighing, she moved around the counter and rushed to take a box from the woman struggling with the door.

Suzie Matthews blew out a breath. “Thank you!”

A breeze whipped in behind them and slapped the door flat open against the wall. “Oh!” Sydney angled the box on the counter and raced before the wind caught it again and broke the old glass window pane insets.

“A bit brisk,” Suzie said, straightening her jacket about her.

Sydney firmly shut the door. “You can say that again. Thunderstorm coming, I think.” Turning, she glanced toward her cousin, Suzie, and then at Lyssa, who was dabbing off another round of powdered sugar on her Dusky Pink-lined lips and staring into her empty cup.

She glanced up. “Mind if I refill my coffee, Syd?”

Both Sydney and Suzie watched as Lyssa slid off the counter bar stool and waddled in her black stretch pants around the counter and toward the Bunn coffeemaker. Suzie sidled closer to Sydney and whispered. “Put on a tad bit of weight lately, huh?”

Suzie slanted a gaze her way. “But she’s not married.”

“Yeah. Well, she needs to get married so she can get a divorce. It’s part of her grand plan.”

One corner of Suzie’s mouth drew up. “What the hell?”

Lyssa shouted out from across the room. “I took the last of it, Syd. Should I make a new pot?”

They watched her twiddle with the carafe and the filter and the basket, punching buttons and watching the first drips hiss against the bottom of the glass pot.

“So, what do you think?” Sydney prodded.

“Can you fix her up with someone? It’s not like it’s forever, so this one should be easy.”

Suzie turned her body fully toward Sydney. “I’m not getting caught up in this. I’m exhausted after that last bout with Chris and Katie.”

“But that worked out fine. Chris said yesterday morning they set a date. November, right? And Mary and Nash are already building a big cabin up in the mountains. Not to mention how you got Chelly and Matt back together. You’re good, Suzie. You can do this for Lyssa.”

“I know. But she’s doing it for the wrong reason.”

“Maybe you can turn things around for her.”

Suzie shook her head. “I dunno. This will require…” She glanced again at Lyssa, who was waiting for the carafe to fill while inspecting her teeth in the wall mirror behind the counter.


*****
Read more about The Matchmaking Chef series by visiting Legend, .
Or visit these links for:
Perfectly Matched, book 1

And coming in September, Mate to Order