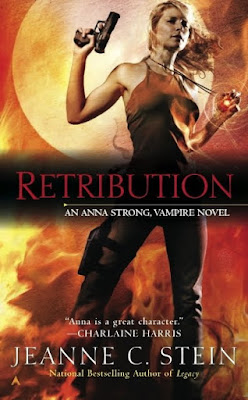 Jeanne C. Stein writes vampires. Enough said, huh? Just when you've heard that books with teeth were so yesterday? Not. Let's meet Jeanne as she talks about her Anna Strong Vampire series.

Hi Jeanne. Welcome to Life, Unedited. You have a new book out. We’d love to hear about it.

Thanks for inviting me today. And yes, the fifth book in the Anna Strong Vampire Chronicles has just been released. Retribution finds Anna facing a foe from a previous book, the black witch Belinda Burke. It also features a character from a short story I wrote for the anthology Many Bloody Returns. Sophie is a witch with a real split personality—she shares her body with a vampire. She and Anna team together to save the lives of Culebra and Daniel Frey.

You have several books in print. Is there a favorite among them? Why?

I think my favorite book is always the one I’ve just finished—in this case, the sixth book, CHOSEN, which will be released next August. It completes Anna’s first year as a vampire and answers the question of what it means to be The Chosen One.

Let’s talk about your writing process. Are you a plotter or a pantzer?

I’m a little of both. Two years ago, I would have said I’m a pantzer. But I found myself stalled on the fourth book, Legacy, partly because I had only four months to write it and partly because I realized I didn’t know the story question. I had to write a detailed thirty-two-page synopsis before I could complete that book. Now I begin with the story question, fill in key scenes and turning points and go from there. It seems to work.

That's a great piece of advice that I could use, as well. Thanks! What drives your story, your characters or the plot?

Characters. Everything that happens in my books revolves around Anna’s reaction to what’s happening in her life. Her loyalty to her family and friend’s is always her first consideration. It is more and more difficult to maintain that focus, though, when her place in the vampire hierarchy becomes clear.

What does your writing schedule look like? Are you a morning writer? A night owl?

Morning. Definitely. I’m at my computer by 5:30. Work until eleven or so. Take a break. Back at one until about five. I treat writing like a job (the best one I’ve ever had) and try to maintain the same hours every day. I have to. I’m easily distracted. If the writing is not going well, I can find a million excuses to do something else.

Do you have a writer’s cave? Can we see a picture?

I do. Here it is. I love my writing space.

I like it, too! Reminds me of mine. (grin) What is your next project?

I just completed two short stories for anthologies. One comes out next month (The Mammoth Book of Vampire Romance) and one in February of next year (A Girl’s Guide to Guns and Monsters.) I have a third short to complete and of course, book seven. There’s another project I’m working on with another writer, but we don’t have that firmed up yet so I can’t say much more except that it involves angels and demons.

Thanks, Jeanne! Wow, your upcoming works sound exciting. Thanks so much for being with us today. Jeanne would like to leave us with the blurb from Retribution.

With her partner out of town, her family abroad, and her mentor estranged, newly-turned vampire Anna Strong is keeping a low profile.

But now young vampires are turning up dead, completely drained of their life force. And though Anna wants to say no when Williams, her former teacher and now leader of a supernatural enforcement squad, asks for her help, she can't.

But soon, she'll wish she had.

And an independent near you.

Places you can find Jeanne C. Stein on the Web.

And with an eclectic bunch of crazy UF authors