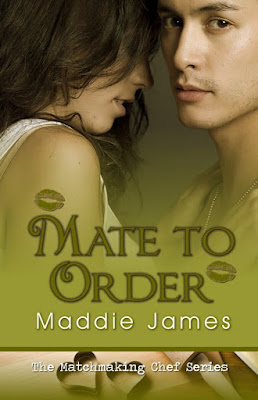 Matchmaker, Matchmaker bake me a match?

Here is the blurb:

When Suzie’s success as The Matchmaking Chef hits the national scene at the same time as her debut cooking show on The Food Channel, her new producer comes to her with a list of requirements—not for Suzie’s job, but for a husband.

Patricia Plum has a specific list and if Suzie really wants to make it big in , she’ll make every attempt to deliver, Patricia’s “Mate to Order.”

Food photographer, Ames Cooper, possesses not one characteristic on that list of Patricia’s. In fact, if you could make a list of everything that is not, Patricia’s list would be it. But never let not being on the list stop him before, and he doesn’t intend to let it stop him, now.

“And that, ladies, is how you set a cozy desert table for two, complete with a warm and gooey Double Chocolate Decadent Delight Brownie ala mode with my signature Buttered Almond Toffee Topping followed with a Bourbon Coffee chaser.” Suzie learned closer to the camera and brought a bite up to her mouth, stringing fudge from plate to spoon. “All I can say is this.” She took a bite of the gooey confection and savored it. “Yummmm. I’m Suzie Matthews and this is one way to bake you a match, girls.”

There was a second’s pause and then, “That’s a wrap.”

“Same.” Patricia swept up next to Suzie and gave her a hug. “Perfect, hon. It was classic. You are a world class pro in front of the camera now.” Glancing down at the dessert, she wanted to swoon from lack of food since she’d skipped lunch. “That brownie is absolutely sinful.”

With her pointer finger she reached to scoop up some fresh whipped cream.

A bit flustered, she turned what she hoped was a serious-as-hell scowl on him. “Take your hand off me, .”

“No, it’s perfect. Move your ass, honey.” He crowded up to her and shoved her aside with his hip. “This will only take a—“

She wanted like hell to pick a fight with him. Some sort of weird payback?

He was hunched over the desert with his camera poised, snapping away.

She bumped him in mid-snap.

He turned an annoyed but wicked grin on her. “You don’t really want to do that, Plummish.”

“Interrupt me while I am in pic mode.”

“Well, I’m in ala mode and I want that ice cream.”

He turned away and positioned himself again to take a shot. “You’re going to have to wait another couple of minutes.”

“By then it will be too melted.” Why was she goading him? “Even though I have to work with you doesn’t mean you call the shots, . I do.”

He started to snap and Patricia shoved her hand forward and simultaneously scooted him out of the way. With two fingers, she scooped up a huge dollop of semi-melty ice cream and whipped cream topping.

“What the hell?” lowered his camera and squared himself in front of her.

Uh oh, she had angered him now. For some odd reason she giggled inside. “Oh, you weren’t finished?” She brought the ice cream up to her mouth and sucked her fingers dry.

There was a distinct twinkle in ’ eyes. The outer corners crinkled. Without hesitation, he set his camera down, picked up the brownie plate, and took a step closer to her. “No, I wasn’t finished.”

“Hm.” She swiped her finger into fudge this time, then again, brought it to her tongue and licked. Damn, it was almost like a dare. Maybe closer to a tease.

Before she could react, Ames took a couple of fingers full of the brownie goo as well, and without words, crowded closer and smeared it down the side of Patricia’s face, raking his chocolate-covered fingers across her lips.

She stood steadfast but truth be told, the act of his hand smearing chocolate over her face and lips was way too sensual. The way he lingered, smoothed....

She scooped up another finger of cake and ice cream and slung it. The sticky mass splatted across his nose.

palmed a handful of the dish and smeared it across her chest.

Patricia dove for the table and the other dessert. Unfortunately, just as she scooped up the second plate, her heel slipped in melted ice cream on the floor and down she went. But not before she fisted ’ black t-shirt at his chest and pulled him down with her.

The second dish of Double Chocolate Decadent Delight Brownie ala mode with Buttered Almond Toffee Topping tumbled from her fingertips and landed on the floor between them.

Soon, cake, ice cream, hot fudge, whipped cream, and topping were flying, and and Patricia were rolling on the floor of Suzie’s new kitchen set, squealing and shoving and pushing, while the crew jeered and hooted, and Suzie fretted about her tablescape, until…

A deep voice, reminiscent of the voice of God, boomed out over the chaos. Patricia knew that voice and also knew that things weren’t going to bode too well for either of them.

“Ahem,” the voice said and then paused. “You know, when I was a child we used to fetch the water hose to separate dogs in heat from their rather aggressive suitors. Anyone have a hose handy?”

Patricia immediately stopped shoving cake in ’ face. His eyes were wide and his smile broad. He looked like a candied chocolate confection laying there on the floor opposite her. His hands were on her waist and the look in his eyes was one of…

She pushed back and stood. followed.

Like it? Get you own copy at Resplendence Publishing.