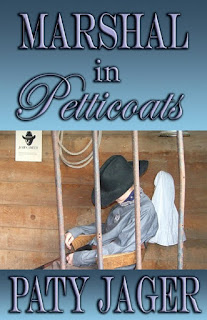 Hi Paty. Welcome to Life, Unedited! Tell us a little about yourself.

I live in Central Oregon with my husband of thirty years. We raised four children and currently ranch 160 acres. We built the house we are living in. It was a wonderful experience even though many people said we'd be divorced before it was through. Ironically, we had few arguments and when we did start getting on each other's nerves we'd take a break from the house for a couple days. I started writing when the kids were small, making up children's stories for them. When I was told I wrote too adult, I wrote two mysteries to exorcise (murder off) a person who had wronged both my husband and myself. Then I read LaVyrle Spencer's Hummingbird and I knew I had to write historical western romance. At this time, I was also writing freelance stories for the two local newspapers. Once I joined RWA, a whole new world of people and learning opened up to me. And after eight years of honing my craft, I became published with a new publisher, The Wild Rose Press.

What drew you to Romance?

Reading LaVyrle Spencer's books I realized I wanted to bring characters to life like she did and entertain people with history. But the best part about writing romance is the dawning of attraction between the hero and heroine and the gripping moment when all seems lost and the wonder of the happy ever after.

Of all the past great Romance authors, who would you say had the greatest influence on you/your writing style?

As a teen I read Phyllis Whitney, Victoria Holt, and Mary Stewart. I read the stories because they took me to far off lands. ( I grew up in a very rural secluded area) I always wanted the hero and heroine to experience more intimacy I those books. Now, I write spicy stories where the hero and heroine always make love in a heated fashion. I think the somber mode of those books and my desire for more intimacy has made my books hotter.

I, too, am a huge fan of Phyllis Whitney, Victoria Holt and Mary Stewart, so can definitely relate! How do you find ideas for your books? Real happenings? Dreams? A great imagination?

Everywhere. Often when I'm researching for a book I'll run across something that will make a good story for another book. I've come up with ideas for books from songs, something I read in the newspaper, see on TV or hear on the radio. That's the fun part about being a writer- your mind is always thinking in terms of a story. Anything that catches your attention immediately gets attached to the story board in your head. Will it work? Can I make it stretch for a whole book? How about a short story? Would there be enough tension/conflict?

How difficult is it for you to get into “writer’s mode”?

Some days are more difficult than others, but I keep a pretty good schedule. Every morning I get my husband out the door to work and sit down at the computer. I go through e-mails and read blogs and write my blog. Then I do PR work and have breakfast. After breakfast I sit down and write for 3-4 hours. In the afternoon, depending on my deadlines, I either work on my writing or freelance editing for three hours. By keeping my schedule on track I can slip into writer mode quickly and get my 10-15 pages a day written. Now this is an ideal day- some days I have to feed animals or check on cows birthing, rake hay, bale hay, change irrigation, or run errands.

You have a new book out. We’d love to hear about it.

My current release is Miner in Petticoats. It is the third book of a historical western five book series about the Halsey brothers. Ethan, Hank, Clay, Zeke, and Gil grew up in the mining country of . After the murder of their parents and youngest brother, Ethan took over the parental duties of the other four. Having finished raising his brothers and working to build their mine into something that will sustain all their families, Ethan isn't looking for marriage or a family of his own. To fulfill his commitment to enhance the Halsey family future, he plans to build a stamp mill and he needs property the widow Miller refuses to part with.

Aileen Miller is twice widowed and has a twelve-year-old son and a four-year-old daughter. Her first marriage was for love. When her husband was killed she had to flee and found herself married to an abusive alcoholic. When that husband came up dead she vowed to never let another man into their lives.

This story is about learning to bend and compromise and realize fate can sometimes throw you a curve. It is also about overcoming fears and learning to trust again.

How did the inspiration for this work come to you?

This is the third book in the series, and I decided I needed to have the oldest brother fall in love before he would be dating an old woman. LOL Since the series titles all have predominantly male occupations-Marshal in Petticoats, Outlaw in Petticoats- I had to give the heroine a male occupation. And since they live in mining country I made her a miner, having been left the claim when her husband died.

Since Ethan is all about his family and not motivated to have a family of his own but definitely motivated to provide for his brothers, I had to place a roadblock in his grand plan to build a stamp mill. So I plopped in a stubborn Scots woman with children who refuses to be battered or used by a man again. And she has a goal to get her son's inheritance back. Giving into Ethan's plans won't help her with her goal.

Do you identify with the characters you write about?

I recently blogged about this topic on my RWA chapter blog. In some ways I think all writers identify with their characters, they have to, to make the character believable and real. But the good thing is you can give them traits you wish you had, like courage, or the ability to be outspoken. In a way, I live vicariously through my characters.

You have several books in print (or upcoming releases). Is there a favorite among them? Why?

I have the three books in the Halsey brother series, a historical western, Gambling on an Angel about a saloon owner and a sister of the Temperance movement, and a contemporary western, Perfectly Good Nanny which won the 2008 Best Contemporary EPPIE. (Electronic Publishing award) I don’t have a favorite among them but I have a reason why I like each one. Marshal in Petticoats was a fun story because the heroine was accident prone and it made for fun writing scenes where her clumsiness got her in trouble. Outlaw in Petticoats pitted a staid, stand-offish heroine against a hero who was bound and determined to make her love him. Miner in Petticoats I pitted the hero and heroine against each other in a battle of wits and showing their admiration and attraction grow. Gambling on an Angel I incorporated some history about the sternwheelers traveling up the and how people with strong beliefs can learn to see both sides. Perfectly Good Nanny was written on a dare by another author, and after I wrote it, found I had the capability to write contemporary and to enjoy doing it.

I kind of covered this up above. I usually do my writing in the morning and research or edit in the afternoon. But I also find I get scenes or ideas for books while I’m driving the tractor, so I always keep a notebook and pen with me when raking, baling or harrowing.

Do you have a “writer’s cave”? Where do you do your best work?

I guess you could call my loft the "writer's cave". I have my desk facing the windows looking out at the Cascade Mountain Range. I also have a 10 x 16 cabin I spend considerable time in during the summer when I go to our other property and change the irrigation pipes. I have electricity but no phone or internet. I use a microwave and electric skillet to cook and have a small refrigerator. My running water is outside(from the irrigation pump) and I use an outhouse. This is my "writer's cave" when I am on water detail. It works well because there are no distractions. Well, an occasional call of the chukar, quail, ravens, or eagle. Oh, or the chhh, chhh, of a rattlesnake.

See above. I have two jobs besides my writing. I help ranch our 160 acres and I'm a freelance editor.

What advice do you have for aspiring writers?

You're writing because you have a passion. Don't let naysayers or overly harsh critics get you down. Critiques are needed to make sure you are polishing and making your work the best it can be, but if someone is harsh or negative, don't keep them in your circle of creativity. Keep only those you know are there to help you get better. And when you do come across someone (like a contest judge) who is overly critical, read what they have to say, take a step back, then review their words again. There may be some truth in what they said, they just didn't say it in a constructive manner.

What is your next project?

I just finished the fourth Halsey brother book, Doctor in Petticoats. And I have a contemporary western out to an editor, my historical paranormal set among the Nez Perce Indians is being evaluated by an editor, and I also have, what I hope will be the beginning of a series, out to another editor. It is a historical western about a female Pinkerton detective and a U.S. Marshal.

Do you have any writing rituals?

My ritual is always going through e-mails and blogs before I start writing. It's like my little warm up to get my fingers working.

Today, writers need not only write great books, but be great promoters of their books, too. What kinds of things do you do?

I have a monthly contest on my website- http://www.patyjager.com, I try to get as many blog spots on other people's blogs as I can, and I showcase other writers to my blog on Wednesdays,http://www.patyjager.blogspot.com I contact bookstores to set up book signings, participate in online chats at reader loops, and give workshops at conferences. And I've participated in several blog talk radio shows as well as get on the local TV station when I have a new book out.

My books so far are all set in . I love introducing readers to my state and the history and lifestyle of the people who tromped across the continent to live in "". They were a hardy group who took on challenges and worked hard to build family legacies.

I'm not one to toot my own horn, so I'll leave you with some reviews:

For a trip back to the raw, wild days of the silver and gold rushes, with a bit of romance thrown in for added effect, this book is perfect. ~ Charissa, Reviewer for Coffee Time Romance

With an intriguing mystery, an action-packed adventure, fully realized characters and a story filled with surprising twists, Ms. Jager has crafted a sensual and gratifying romance that will have you turning those pages. A keeper for any lover of romance or the Old West. Love Western Romances

Gambling on an Angel

Ms. Jager tells an emotional tale full of characters that you’ll take into your heart and want to remember long after you’ve read the last page. www.romancejunkies.com