I love a good deal.

Remember yesterday? I had to brave the cold to go pick up a prescription. So while I'm waiting (30 minutes, the lady behind the counter had said) I tooled around my neighborhood grocery store to pick up a few things I needed.

And obviously, a few things I didn't. Well, not immediately, anyway.

Now this is not an uncommon thing, to set out for one thing and come home with something else. I do it, um, occasionally. Don't you? Lucky for me, however, that this particular day I would be coming home with the "deal of the day."

It doesn't beat last year's "deal of the day" but oh, well. It was a sale. I saw it. And I conquered.

Evidently my local Kroger makes it an annual event to clear the shelves of certain baking items after Christmas. I cleaned up big time last year, this year the pickin's were a little lighter. I suppose it's the economy. 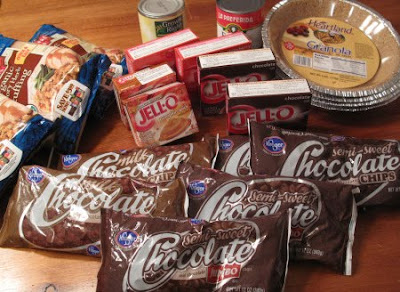 How could I resist? The big bins were there and they were emptying. Fast. Let it not be said that I do not get in on good sales.

So what would you pay for the items on the table? Look closely now. There are 4 pie shells, 6 bags of chocolate chip cookies, 3 bags of stuffing, 6 boxes of pudding, a can of organic cranberry sauce and a can of refried beans (hey, they were in the bin, all right?)

I ask you again. What would you pay? (assuming that you would want these items) Got that figure in your head? Are you sure?

Cha-ching! Don't you love the sound of change falling right into your pocket?

I love a good deal.
Posted by Maddie James
Email ThisBlogThis!Share to TwitterShare to FacebookShare to Pinterest
Labels: Life