A writing lesson from the writers of Castle 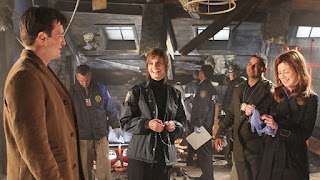 I love the television show Castle

. In fact, I pretty much love the Rick Castle character. And Nathan Fillion. That goes without saying, of course.

And I love Kate Beckett, or Nikki Hea

t, or whichever character name you want to call her.So, all right. All of that is pretty much established.

Last night, of course, was the second part of a cliff hanger Castle episode. The week before, we left Kate standing in her apartment, just out of the tub and wrapped in a towel, when her cell phone rings and Castle is on the other end. She answers; he tells her the killer is not dead, and then her apartment explodes.

Flashforward to last night. Turns out Kate had time to hurl herself into the bathtub and suffered only minor 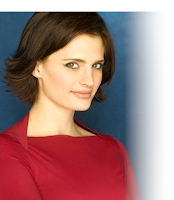 injuries from the explosion. Her apartment is ruined and now, she’s been ordered by her chief, and with Rick’s insistence, to stay at his place. I’m eager to see how this is all going to work out, but that’s not what I want to talk about today.

The show last night was great, lots of twists and turns, which I love, and plenty of banter and innuendo, which I also love. But there were two lines that made me laugh right out loud. Stay tuned, I’ll get there.

Rick has figured out the killer. Kate goes after him on her own with Castle as backup. She actually invites him out of the van instead of telling him, “Stay here,” like usual. She gives him a gun. First time she’s ever given him a gun and tells him to watch her back. Okay…  We’re progressing here into different territory. Good job, writers. As the viewer (reader) I’m realizing something a little different is going on, or about to happen.

She approaches the killer, the guy runs, she finds him, a scuffle ensues. Castle goes to un-ducktape the captive (female FBI agent played by Dana Delaney, another excellent character) and then goes after Kate.

The killer knocks her to the ground and stands over her with the gun with that sinister serial killer, “now I’ve got you” look on his face. His fingers curl around the trigger.

Castle rushes in, assesses the scene, and fires, hitting the killer’s hand and knocking the gun to the floor. (Yay! 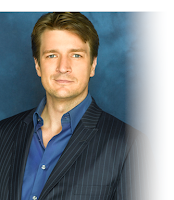 Way to go Rick! You CAN shoot after all!) The killer scrambles, reaches for the gun, and Dana Delaney steps on his hand, stopping him, and Kate cuffs him, gives him his rights (sort of) etc…

Now, there was a lot going on in here (and in the entire show) that we could talk about from a writing perspective but the one thing I really want to focus on is the last couple of lines in the show.

Later, when all is safe and killer is locked up, as Kate and Rick decompress from the ordeal, Kate says to him, “Hell of a shot, Castle.”

To which he replies, “I was aiming for his head.”

This is where I laughed out loud. The old Castle was back. Although I was impressed that he had shot the gun out of the guy’s hand, I was glad to know that he wasn’t a crack shot. After all, he’s Rick Castle. He’s a writer. He can figure out the plot or delve into the killer’s mind, but he’s not a policeman nor can he shoot. Much.

The writers set this up with Kate, a) taking him with her rather than making him stay in the van (this also showed her trust in him), and b) giving him the gun (even more trust). Kate has never done anything like that before. Both of these moves were out of character with previous episodes but were necessary in this pivotal scene. Kate is showing trust, the story is moving forward. And, this was a critical time because we know that Kate’s life, and maybe Rick’s, is in jeopardy. And she wants him to have her back. She avoids him in real life, when it’s obvious he really cares for her and she’s extremely non-committal, but in this case, by giving him the gun, she’s saying, “I trust you and I want you to keep me safe.”

For all those romance lovers out there, you may now heave a small collective sigh. But just a small one.

So, when Rick shoots the gun out of the guys hand, we (viewer/reader) are like, “Whoa, Rick! Way to go!” and we have an inkling of this: “Wow! Can he really shoot? Has he been hiding that from us? We didn’t know he had it in him!” and so on… The writers have taken him briefly out of character. And we see a glimpse. And we like it. And we also may question it, just a little bit….

But with that last conversation, when he says, “I was aiming for his head,” the writers have zinged him right back into character, the writer Rick Castle whom we all know and love. Sort of bumbling and unsure, but quick with the wit and smart as a tack, but incompetent with the gun.

The relationship (Kate and Rick) is moving forward in a lot of ways, but with this last line, we also know that we’re back on safe and familiar (except for that staying at his apartment thing) ground.