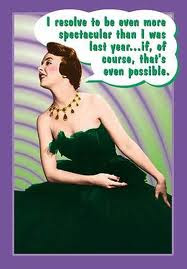 So, here it is, December 31. I'm supposed to be thinking about the new year, making some resolutions, figuring out a plan to keep at them, and looking to the future. I should also be considering that New Year's Day meal that I usually cook--you know, the pork and kraut and blackeyed peas, all of which are supposed to bring us luck and money and other good things.

I've heard that you should cook a penny in the kraut, and that whomever gets the penny in their serving is the one the money will come to the next year. But since it's likely I'll be the only one eating the kraut, and the fact that I'm not too keen on a dirty penny being cooked along with it, I think I'll pass on that one.

But back to the New Year's thing. I will make resolutions but before I can do that, I have to do a little reflecting on this past year. I took a couple of huge leaps in 2010. It will be a year that will remain one for the books, in my book. (pun unintended)

Accomplishments this past year:
Things to work on (or I suppose, these are my resolutions for the coming year):
I'm betting many of you are thinking about your resolutions, or things to work on for next year, too. I'd love to hear about your accomplishments this past year (celebrate!) and your plans for the next. What's on your plate?
Posted by Maddie James
Email ThisBlogThis!Share to TwitterShare to FacebookShare to Pinterest
Labels: Life

Congratulations on a wonderful year of accomplishments in 2010. I know 2011 is going to be even more memorable.

Thanks for helping me achieve my 2010 goals. I'm so excited to debut with Turquoise Morning Press and grow together.

In 2011, I'm going to be better about juggling my career, family, dreams and health. I've neglected me for a while - you know from a eat right and excercise perspective - and it's time to get that in balance so I have the energy to accomplish all I've planned for 2011 and then some! I'll see you on the virtual aerobics floor :) We can bust a move together.

Sounds like a plan, Nancy! Well keep each other motivated! We can do it.

You're right, to do all that we want to accomplish, we have to be healthy. I should move exercise up to bullet #1.

I have the same goals. It's way too easy to stay behind the computer in one's robe and slippers. I used to teach up to 10 water fitness classes a week, and now I only have one. The gym where I have a free membership is 12 miles away, so I easily find reasons not to drive down the mountain. Need something for the dinner menu? The DH can pick it up since he's already down there.
Ugh! That has got to stop. I NEED to get my derriere out of the chair and move more of the time. So, this is the year I make myself move. A lot more. That means I have to be more efficient at the computer, and then be more efficient when I'm not there. My body will thank me and I'll feel better about myself.

On the plus side, 2010 has been the year I made a commitment to get my books either published or re-released and Turquoise Morning Press has been the vehicle for doing so. That's one area where I do feel I've accomplished something. I'm looking forward to an eventful 2011.

I have not given any thought to my resolutions this year...but I'm like you. I need to get a better schedule - for my family's sake. Sometimes laundry and housework get put on the back burner while I'm writing and promoting. Ok, fine! All the time. There I admit it. haha
So yeah, I need to come up with a schedule that works for everyone.

Your sudden change of career sounds familiar. I hadn't written in five years and when I got laid off because they sold my division, I found myself happier than a pig in slop. I know I have to find a day job to survive, but have thoroughly enjoyed writing fulltime with six book contracts and eight short story/anthology contracts in one year.

Here's hoping I can repeat that in 2011! I raise a virtual glass of champagne to you.

And right back atcha, Bobbye! I still need the part-time work, and I know that if it went away, I'd have to fine something to fill in the gap. But i'm still plugging away... Best to you and hope you find something that you like doing.

Renee, thanks about the site design change. I just got tired of the purple. LOL And I do love the water.... You know me, ocean freak here!

Suzanne, we should motivate each other to move! I think that's the biggest goal for me...just get up and move. It's so easy not to. :( But my joints will thank me.

BIG Accomplishments, my friend, fellow writer, and newest publisher! But you have always worked hard, strove towards, and succeeded, in all those areas of your life that meant the most to you. I am more than proud to call you friend!

This has been an odd year, last couple really, for me on a personal level. Between the hardships of this economy, the adjustments of having children go from being children to becoming adults, and having a husband that travels more than not, I sometimes get lost in the chaos of it all. But the one thing that keeps me sane is writing, and thanks to you and my other publisher, I get to share my escape from reality with others who need a little escape also.

I also have neglected me in all this. I have gained massive weight over the last few years that makes looking into the mirror a nightmare… I don't even know that woman. So that is 2011 goal #1. Take care of me. Eat right, exercise DAILY, and take back control. Goal #2 is to harness the imagination and settle into writing books that are both already contracted, or promised. That is four at this moment. And a fifth, the big one that I have set back too many times to write and publish smaller ones is going to get finished… then I am putting it out there to see what it does.

Happy and prosperous New Year to all!

And you will, Janet. I know you well, and you will do what you set out to do. I'm sorry for your rough year and hope that 2011 is so much better for you and the family.

As to the writing, we started this writing adventure together, way back when...1990? And we shall persevere!

As I've told you, I'm inspired by your successful publishing venture and see wonderful achievements in the future for TMP under your hand.
Resolutions:
I don't eat 'right' but I guess I get by. I do have the exercise thing down, however. I started exercising again six years ago (in mid-Jan. of 2005). I've had a few months this past year where I only got 7 or 8 sessions in a given month, but my overall average for the six years is about 11 times per month. I want to be more regular about that in 2011.
My other goal is to join your TMP team, but that's another story.
Hope your NY is even better than last year.
Jeff

Your 2010 risks and accomplishments are inspiring. What better way to spend each and every day than doing what you love? Thx for bringing me into the TMP family...what an amazing group of authors. Hugs for 2011 and, as always, HAPPY WRITING!

Hey Jeff. Thanks for stopping by my place. I wish I had your exercise habits!

Tonya, I don't sleep much. LOL Actually, I sleep really great, but when I'm awake, I'm always working on something!

Thanks, Susan. Glad you are part of the team, too!

I admire you for all you've done in the past couple of years. You've really kicked butt. Even though it was a drastic lifestyle change, you handled it with panache. 2011 will be a wonderful year.
2010 was a momentous year for me too, and I plan on keeping that momentum going.
And getting off my ass. Weight has GOT to go. At least some of it.