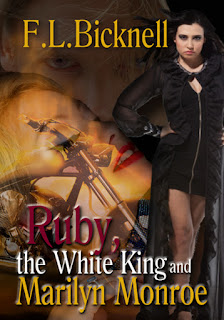 Every once in a while a book comes along that you simply can't get out of your head. For me, that's the sign of a good one. Recently I read F.L. Bicknell's Ruby, the White King, and Marilyn Monroe and I have to tell you, the story is a keeper. Drawn initially to the  catchy title, I was even more captivated as each chapter rolled on.

Reincarnated over the centuries. Stuck with a ditzy Marilyn Monroe lookalike. Falling for a rich albino guy. It’s just Ruby’s luck for Hell’s “real” angels to ride into this life and screw it all up.

Paranormal romance takes off full throttle as demonic motorcycles and their beautiful riders chase Ruby to the rocky shores of Key West for a battle of epic proportions. Are they angels, demons, or something else entirely? Ruby must send them back to a hell unlike anything the world has ever imagined. But will she allow herself to love the White King who has found her again over one thousand years later?

I've known F.L. Bicknell for quite some time, having connected several years ago via the Internet. We've never met face-to-face, but that doesn't matter. I've come to respect her hard work as an author, her determination and perseverance, and her continual striving to move her writing career forward. I think Ruby, the White King, and Marilyn Monroe could be just the book to do that.