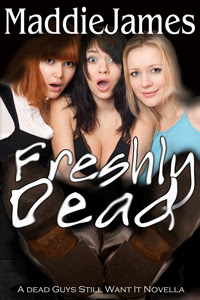 So, everyone likes free,  huh?

Okay, so today is your chance to get one of my books for free! Have Kindle? Or Kindle app? Then you have no excuse.

FRESHLY DEAD, book one in my Southern fiction, romantic comedy ghost story is now available for FREE on Amazon for today. If you haven't  picked up your free copy, you have until midnight Pacific Time to run and get it!

Check out this new book of mine, written in a slightly different voice than some of my other work. Still Maddie, still romance, just tossing in a ghost, a little mystery, and a lot of Southern sass.

So hey, here's a sample okay?

“And there he was, standing there all smug and proper looking, freshly dead, with that pasty pale face, and trying to order me around. Men.”

Mitzi took a quick glance around the darkened bar and snatched up the shot glass of liquor the bartender just handed her. She licked the back of her hand, shook on some salt, lapped it clean away, then slammed back the hefty shot of tequila. Instantly, she bit into a slice of lime, shivered and gasped. Marla, her other sister, the one who liked sex and tequila (thank God she had one sister who was normal), stared at her.

“I think you need to lay off the tequila, sister.”

She reached up and grasped her sister’s shirt collar to pull her face closer. “Mar, I just saw a real live freakin’ ghost of an estranged hubby today. Don’t hassle me about the shooters.” She let go, and Marla sank back into her bar stool. “And he tried to kiss me.”

“Ewe!” Marla shook, her face twisted into an oh-that’s-so-gross look. “Crap, Mitzi. That is so wrong.”

“Tell me about it.” She waved toward the bartender. His back was turned. Dammit.

“Mitzi, wait. This was Ken, right? Your alienated husband who left you with a wad of past-due bills, a string of repossessors gracing your doorstep, and who stole our Grandmother’s diamond ring? Ken, whom you have not seen hide nor hair of in almost two years? The Ken the bounty hunters said they couldn’t find to serve him the divorce papers? That Ken? Dead and talking to you from some sort of ghostly form?”

Mitzi bit her lip and glanced away. “Yeah, that Ken, Marla. The stupid klutz. Gone and got himself killed. And right when he was about to give me a job. Damned stiff owed me that, too.” She looked back into her sister’s face.

“Job? You didn’t tell me anything about a job. Why would you want to work for Ken? I’m not getting this….”

“Cripes. Don’t give me that look. There are too many things to get straightened out. The thing is Ken is dead. But I can’t be worried about that right now.”

“What?” Her sister looked stricken with horror.

“Well,” Mitzi countered, “he’s not that bad off if he’s sitting there in the chair and talking to me now, is he? I mean, he argued for, I dunno, an hour it seemed, about me being late for the appointment. Pissed me off.”

Marla shook her head. “I...I’m not getting this, Mitz. Something is dreadfully wrong here.”

“No, I said dreadfully.”

“You have a big problem on your hands. What did you do with the body?”

Mitzi arched a brow. “Nothing. It’s still there.”

“What? You didn’t report it to the police?”

She shrugged. “Nooooo, why should I? Ken looked happy as a clam to me. He might be just a spirit, but I don’t think he needs that body any longer.”

Marla grasped Mitzi’s arm. “My darling sister. The man is dead. He was your husband. Least of all, even if he was a slimy, weasel of a bastard, he deserves a proper burial.”

Mitzi jerked her arm away and turned toward the bartender, finally signaling another shot. He nodded her way. “Knock it off, Marla. The man is too nasty to die. He’s got something cooked up. I just know it. He’s faking it. I know, maybe he was a hologram. No, couldn’t be. There was a lot of blood. But that spirit of his lives on. Stubborn son of a bitch.”

“I’m not going to do anything but try to figure out how I can get back what Ken owes me, and then I’ve got to find a job. A real one that doesn’t include sex and telephones.”

Mitzi waved her off. “Later. Just another chapter of the story. The thing is the bastard is back in town. He skipped out on me with some of my hard earned cash and a credit card and yeah, Gran’s ring. And I’m not over that car repo thing, either. Not to mention I’m about to lose my house. The man owes me. I’m going back to set things square with that asshole.”

She picked up her purse and headed for the door. Stumbled, actually. “Even if the son of a bitch is dead.” What the hell?

Marla’s hand firmly grasped her bicep. “Oh no, not tonight, Sis.” Mitzi watched her sister through blurred eyes as she shoved some bills toward the bartender. Something was seriously wrong with her eyesight. The man looked awfully fuzzy. Deadlike. Ghoulish. Was he dead, too? She grasped her tummy. Ewe. Not feeling so hot. Maybe it was time to go home.

***
So, are you laughing yet? There is more to come. Get yours FREE today at Amazon.
Posted by Maddie James
Email ThisBlogThis!Share to TwitterShare to FacebookShare to Pinterest

Very cool! And I love the cover! I'll have to pick your brain about doing a free book!