Featuring Amie Denman: Will Work For Love in the UNFORGETTABLE HEROES boxed set

Today I am featuring Amie Denman's book, Will Work For Love, which is included in the UNFORGETTABLE HEROES boxed set just released by Turquoise Morning Press (see gorgeous cover above!). Amie's book is a BAREFOOT BOOK, which means there is the requirement of a beach as the setting of the story. Ironically, this story happens at Christmas time -- a very nice contrast!

Here is a bit about the book:


Hurricane Destiny leaves a trail of destruction across the island of St. Thomas, jeopardizing the wedding of Whitney Oliver’s best friend. When Whitney arrives on the island, she finds a disaster only a sexy carpenter like Chris Maxwell can repair. Despite the sizzle between them, Chris has secrets that threaten his construction business and force him to work for Whitney’s love.

Brilliant pink and coral streaked the evening sky outside the windows of the small aircraft. With a rush of relief, Whitney Oliver watched the line of passengers ahead of her shuffle toward the open door. Warm island breezes and sea air wafted toward her down the narrow aisle.
“Welcome to St. Thomas,” the stewardess said as Whitney exited the plane. “Happy Holidays.”
“Thank you.”
A man at the bottom of the metal steps pointed the passengers toward the small building to retrieve their luggage and get island transportation.
“Vacationing alone?” he asked, his sun-browned face wrinkling into a friendly smile.
“Wedding,” Whitney said.
“Lucky man.”
It felt like a vacation as she crossed the tarmac at the tiny airport. She paused outside the doors of the small building where the man directed the passengers. The warm evening air and ocean smell were a sharp contrast from cold wintry Boston. Whitney didn’t want to go into the airport building quite yet. She pulled her cell phone from her purse and called Taylor.
“Did you make it okay?” her friend asked as soon as she picked up.
“I’m standing here on beautiful St. Thomas at sunset.”
“And how is…did you see any damage?” Taylor paused. “Is everything okay?”
Whitney laughed. “I haven’t seen your estate yet, but stop worrying. You think about your fiancé and that tiny baby. I’ll get everything ready for your wedding.”
“You’re the best maid of honor in the world.”
“I know. Enduring two weeks at an estate on a tropical island…it’s going to be rough.”
“Call me every day,” Taylor laughed, “or I’ll think you ran off with a hot islander.”
“Right. Then I’ll be the one having a shotgun wedding next Christmas Eve.”
“Do you think my father will bring a shotgun?”
“Your father would make his chauffeur carry it,” Whitney said. “And he couldn’t be happier about your wedding.”
****
Christmas music—tropical style with steel drums and a reggae undertone—played in the lobby as Whitney searched the luggage pile for her large red suitcase. It was stuffed full and embroidered with the name of her company, OutWhit Outplay Sportswear, in looping white letters. She flipped the suitcase onto its wheels and headed toward the revolving door next to a sign advertising rental cars just outside.
She approached the revolving door and stepped briskly into it, expecting her suitcase to roll behind her obediently. Chronic over-packing finally caught up with her, though, and her overstuffed red suitcase got firmly sandwiched in the door. The whole revolving door ground to a stop and refused to move even an inch.
She dug in her heels and pushed harder. Several people waiting to either enter or leave the lobby looked at her curiously but without a whole lot of sympathy. They were probably thinking a girl with a suitcase of that size should never have attempted the revolving door.
Whitney tried a new tactic. She braced herself firmly against the inside of her glass triangle and put one foot on her suitcase. If she could shove it backward out of the door, she might get the whole thing moving again. A small bead of sweat rolled down the back of her neck. An entranced crowd of people gathered to watch the lady with the red suitcase fight the revolving door for freedom.
“It’s not working,” Whitney said aloud. She noticed that not one of the many fascinated tourists in the airport was doing a thing. They are going to stand there and watch me die in this damn door, she thought, as she planted both feet against the side of her suitcase and shoved as hard as she could.
Again, nothing. Whitney lowered to the floor and closed her eyes. Some maid of honor I am. I’ll still be stuck in this damn revolving door in two weeks as my best friend sways down the aisle on her parents’ estate. Taylor deserves better than this. Deserves a friend who would finalize her wedding plans and not get stuck in a door at the airport, trapped forever to endure a horrible death by the weight of her own luggage.
Her feet were still propped against her suitcase when, miraculously, she felt it start to slide. She opened her eyes and looked into a set of blue eyes the exact color of the tropical waters she’d just flown over. Had death come quickly, floating her toward heaven on a wave of sparkling water? The blue eyes belonged to a guardian angel who was going to free her from her sweat-drenched body and the burden of her earthly possessions in an awkward red suitcase now missing one-half of a zipper.
“You might want to get up,” the angel said.
Whitney had never actually seen an angel, but she was pretty sure that a seraph wouldn’t have a jaunty scar over one eye, dark blond hair a touch too long, a rakish grin, and shoulders wide enough to shoulder all her earthly burdens. Of course, this angel came with a big benefit. He was bracing those broad shoulders in the door and dragging her suitcase out the opening. One giant tug and the suitcase surrendered to the tall blond man. The door swung freely, and Whitney sprang to her feet. In one fluid movement, she swept out into the warm tropical air.
The man balanced her suitcase on one shoulder and stood on the pavement outside the door staring at her. He moves fast. Whitney took a deep steadying breath of the fragrant island air.

Oh! Those heroes to die for... Look what I have! 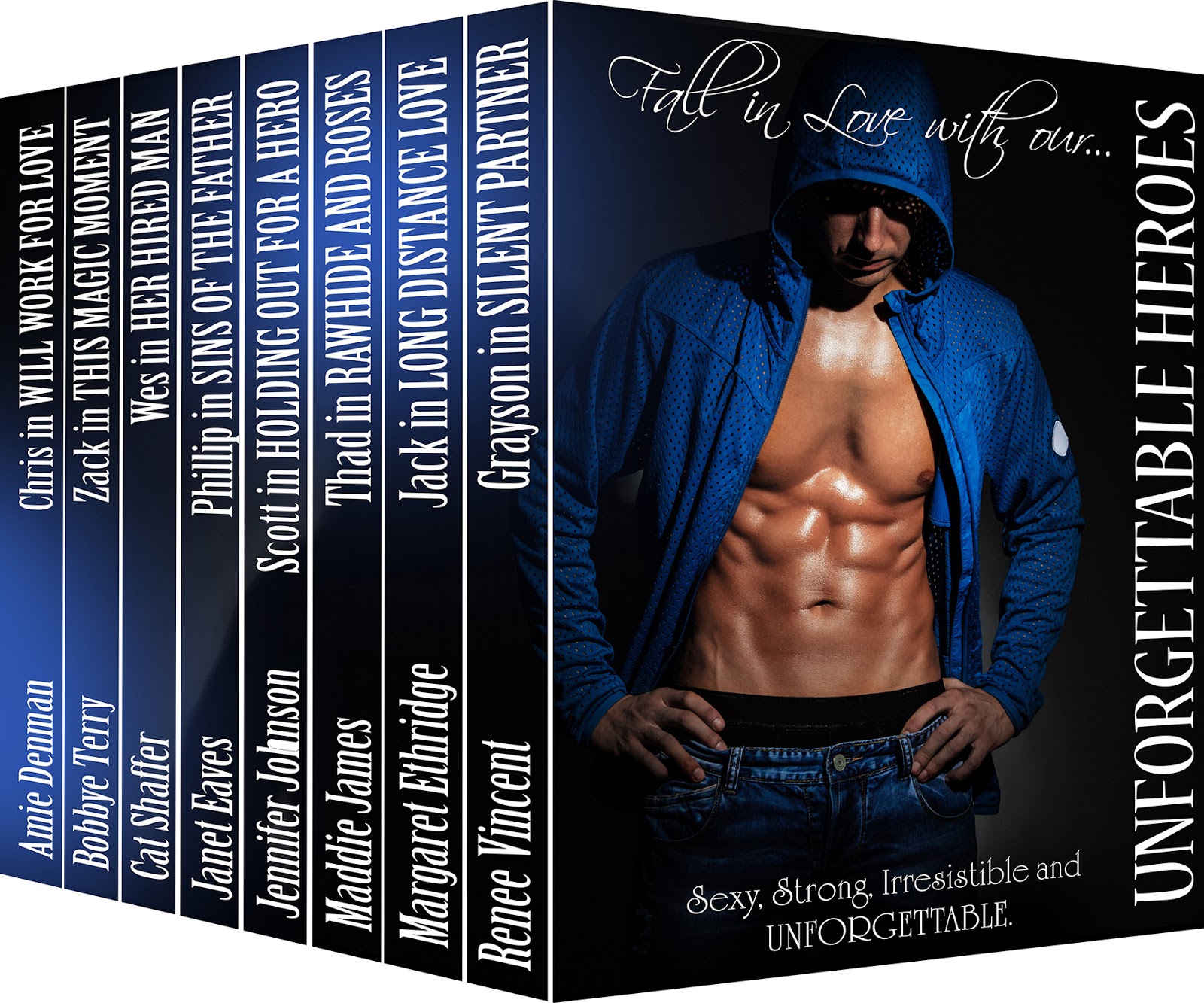 Several of Turquoise Morning Press’ award-winning and bestselling authors share their favorite contemporary romance heroes—all boxed up for you in one sexy and irresistible package! From a sexy carpenter to magnetic CEO, a rough-and-ready cowboy to a homeless man, a classic car buff, a starving artist, a Latin-style dancer, and an FBI agent—each unique hero has his own story to tell, and a heroine who just can’t forget him. Ever.

With an introductory promotional price of $0.99, how can you resist this unforgettable boxed set, either?

WILL WORK FOR LOVE by Amie Denman, EPIC Award and Gayle Wilson Award of Excellence finalist. When a hurricane sweeps across St. Thomas, Whitney Oliver turns to a sexy carpenter whose secret life forces him to work for her love.

THIS MAGIC MOMENT by Bobbye Terry (writing as Daryn Cross), award winning author of contemporary, historical and fantasy romance. Zack Graham, CEO of Scrumbles Snack Cakes, is energetic, magnetic, and a workaholic who refuses to let a woman make a fool out of him again.

HER HIRED MAN by Cat Shaffer, Golden Heart finalist and award-winning writer..
Hot nights, a double sleeping bag and a stranger for a husband…how much can one city girl take?

SINS OF THE FATHER by Janet Eaves, Amazon bestselling author of the Ladies of Legend contemporary romance series. Just like the Princess in the classic tale Sleeping Beauty, Aurora’s life doesn’t really begin until her heart is awakened by a handsome struggling artist.

HOLDING OUT FOR A HERO by Jennifer Johnson, who writes comedic romances so entertaining even guys read them. Author of the TMP top-selling Rescuing Riley. Abigail Benton is a bum magnet, according to her dad. When she becomes attracted to a homeless man at the community center, she wonders if what her dad says is true.

RAWHIDE AND ROSES by Maddie James, Amazon bestselling author of contemporary and western romance. Kim Martin is hardly equipped for a Colorado camping trip, especially when her mountain guide is a rough-edged cowboy who is as untamed as the wilderness.


Grayson Anders is a talented Latin-style dancer; Chloe LaRoche is a talented artist. When the two indulge in a passionate, out-of-control, one night stand, they wake the next morning consumed with inspiration.

Who is your favorite hero?