HOLDING OUT FOR A HERO by Jennifer Johnson is definitely a candidate for an #UNFORGETTABLEHERO!

Today's featured book in the UNFORGETTABLE HEROES boxed set! HOLDING OUT FOR A HERO by Jennifer Johnson.

Johnson weaves a lovely tale laced with humor and tenderness. Her ability to shift perspectives shows her willingness to write a romantic adventure in a creative and fun way. 5 Stars, Amazon Review (previously published print version) HOLDING OUT FOR A HERO will release as a single title summer 2014, available now only in this boxed set! 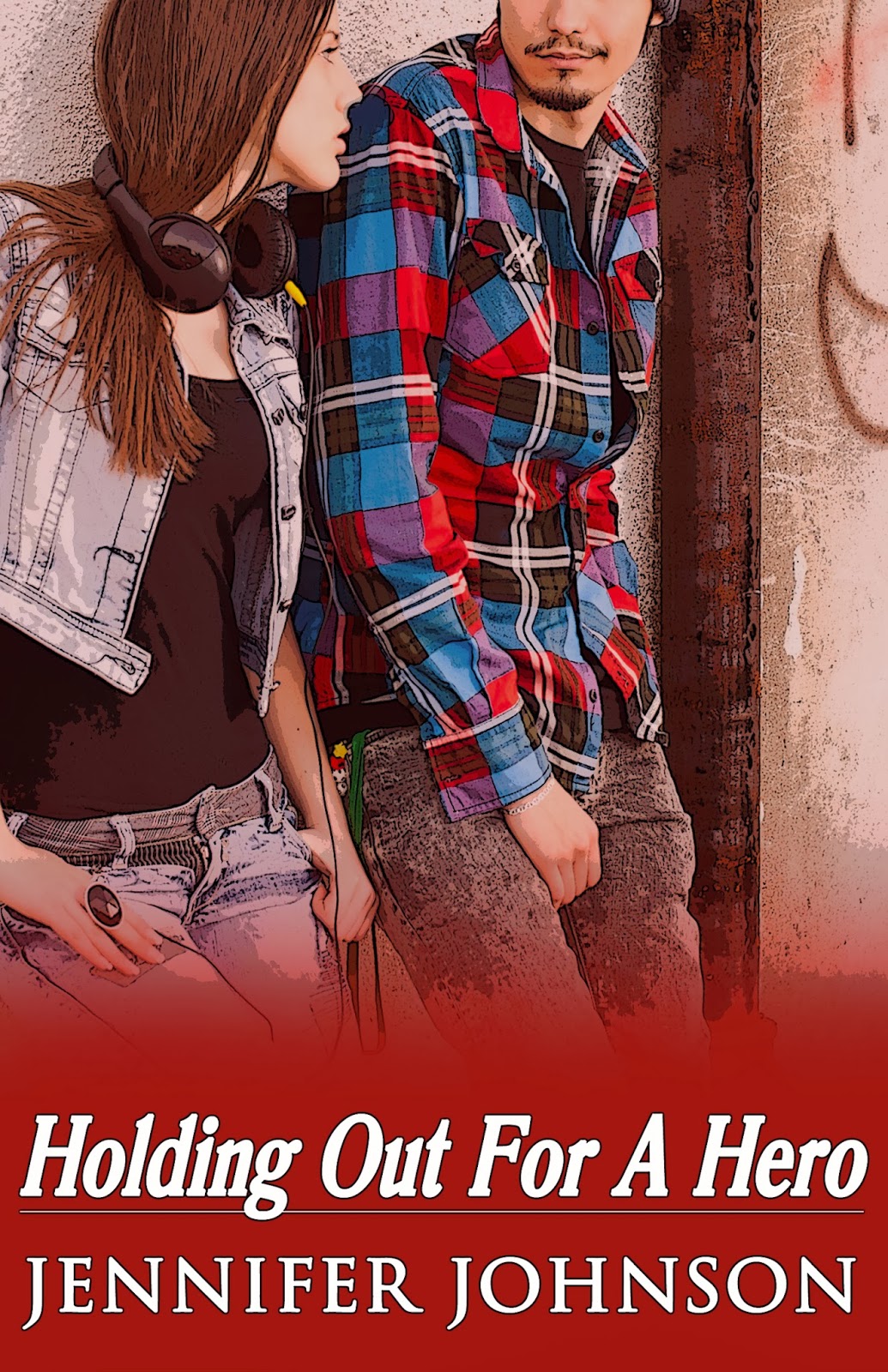 Book description:
Abigail Benton is a bum magnet, according to her dad. When she becomes attracted to a homeless man at the community center, she wonders if what her dad says is true.

I’m Abigail Benton, and I am an embarrassment to my parents.

My grandmother’s name, which is also my name, is on one of the buildings where I went to college, but that didn’t mean much when my ex-jerk-of-a-pot-smoking-boyfriend stole money from the accounting firm where I used to be employed. My grandmother’s legacy only served to make the wise judge and the D.A. who I’m pretty sure are my uncle’s golf buddies, work out a plan to teach little Abigail a lesson in humility.

I now work the graveyard shift at Waffle Mania and do five hours of community service a day in Clavanaia at a youth center where I get to babysit a bunch of hoodlums who hate me as much as I hate being there.

However, I haven’t lost my sense of humor or my shiny bright outlook on life.

I’m done with them, romantically speaking.

On the third day I was at the community center, in, if I’m honest, what was a pretty scary part of town, my car was broken into. I even saw the punk who did it. This young man’s name was Yo-Yo. I’m sure it wasn’t the name his mother gave him, if she even stuck around long enough to name him, that is. If you knew half the stories of the lives of these kids, it would break your heart into at least ten pieces. It’s so sad what these kids have been through. However, does it give them the right to break the lock on my car and steal my MP3 player? I don’t think so.

I walked out the door with Mr. Harvey, the bald colossus of a man who directed the center, when we saw Yo-Yo jump away from my car and pull the I’m too cool to be doing anything I shouldn’t be doing act. Mr. Harvey’s lip curled, and I could have sworn I saw a small puff of smoke come from one nostril—no, he wasn’t smoking at the time.

We both knew Yo-Yo was doing a no-no. This could either make me or break me with the little guy and all of his buddies.

“Any rule against Yo-Yo taking a drive with me while we work things out about respecting people’s property?”

“You can’t take him off the premises.”

“Can I sit with him in my car for a little while?”

“That’s pushing it. What if you two sit in the front, and I sit in the back as a silent observer?” Mr. Harvey stared at Yo-Yo, but directed his comments to me.

I liked that idea. Mr. Harvey’s presence would indicate to Yo-Yo that I had the Big Man On Campus on my side. “Lovely.” I fished my keys from my purse and swung them around my finger like I was slinging a gun.
I marched over to where Yo-Yo was trying to sprint from my car and still act as if he had no care in the world.

“Yo-Yo,” I called and ran to catch up with him. He pretended like he didn’t hear me. Big surprise, right?
When I was walking abreast with him, I smiled so sweetly as if this kid was my best friend. I invited him to come with me, linked my arm into his, and turned us around to my poor violated Toyota. Mr. Harvey stood at the rear door waiting for entry. At the car, I noticed that, sure enough, my player was missing. It was small so I hoped it wasn’t in one of his pockets. I studied his low hanging pants. I’d hate to feel up his knee caps searching for my tunes. I’d check the backpack first.

His gaze jumped from me to Mr. Harvey. I could see the wheels spinning in his brain. Did he know the jig was up, or did he think he could he fake his way out of this?

“I can’t. My…uh…sister is s’posed to pick me up in ten minutes. I’ve got to wait on the sidewalk for her.”

“We’ll be able to see her when she gets here.” I reached for his backpack which he had slung low on one arm, but he moved it to the other side. I guided him into the front passenger seat. “Won’t this be nice getting to know each other?” I winked at him. Hurrying around to the other side, I sat on the driver’s seat, and Mr. Harvey sat behind me. As I settled in, I noticed Yo-Yo stared straight ahead, playing it cool. My heart sped. I was nervous, but I couldn’t show it. Not only did I need to prove myself to this kid but also to the man in the backseat who signed off on my service hours.

“I had an MP3 player on the seat. Do you know what happened to it?”

I glanced in the rearview mirror to Mr. Harvey. I appreciated that he still hadn’t spoken.

“I didn’t do nuthin’.” His fair skin had reddened all the way to his hairline.

“Would you open your backpack and let me see?”

Bending forward he unzipped a pocket on the backpack resting at his feet, pulled the MP3 player out, and slung it at me. So, did I berate him for throwing it at me or for stealing it in the first place? Both?

“Don’t you know better than to take other people’s things?”

“Don’t you know better than to put your…stuff where people can get it?” YoYo snapped.

I sighed. Stupid me thinking a locked car was enough of a deterrent. I was the injured party here. What right did he have to be mad? “Come on, Yo-Yo. You know better than to break into a car and steal.”

“Why don’t you leave? Ain’t nobody here want you here sticking your nose in our business.”

That’s funny. He violates my car and steals my stuff, and I’m sticking my nose in his business? Glancing in the mirror again I wished the silent observer would comment. How about some help here, Mr. Harvey? No such luck.

I held up my player and scrolled through the music artist’s names. “What do you like?”

Yo-Yo snorted. “You ain’t got nothing I want to hear.”

“Then why’d you steal my MP3 player?”

“Because I wanted to.”

Oh, now there’s a brilliant answer. I bit back the sarcastic comment. Looking through my music, I thought either ABBA or Enya—something that would make Yo-Yo as miserable as possible. Enya was obviously the best choice, but could I stand it until Sister Yo-Yo arrived? Probably not. I didn’t know what I had been thinking when I was going through my Enya phase. ABBA, however, was a classic. Every person ought to be exposed to and come to appreciate their music. Yo-Yo’s time had come. Mr. Harvey’s, too. I glanced back at my supervisor wondering how he would tolerate seventies Swedish music. He struck me more as a Miles Davis kind of guy.

Just for fun, I put it on number six, touched the repeat option on the screen, and hooked up my player to the jack in the car. I might not have been able to put up with Enya for long, but I could have listened to Dancing Queen all day.

LOVE the premise of this book, Jennifer.

And congrats on the successful sales of this boxed set!

Hey guys! so glad to be here today.

My pleasure! You know I am a total fan girl. :)

Great opening, Jennifer. I haven't read it, but I will! I have my copy. ;)