What if your life is a fairy tale? SINS OF THE FATHER by Janet Eaves, featured title in UNFORGETTABLE HEROES

Everyone loves a fairy tale, right? Being kissed by a handsome prince and all your cares and worries go away. Being rescued by the white knight and carried off to your own happily-ever-after? Janet Eaves story in the UNFORGETTABLE HEROES boxed set, is a fairy tale, of sorts, as she puts her own modern spin on a classic tale.

Note: Sins of the Father is currently ONLY available in this boxed set. It will be released as a single novella later in 2014.

Sins of the Father—Just like the Princess in the classic tale Sleeping Beauty, Aurora’s life doesn’t really begin until her heart is awakened by a handsome struggling artist. But with her life in danger, Aurora must hide who she really is. Unbeknownst to her, her struggling artist isn’t who he appears to be either.... Friend, lover, or foe? 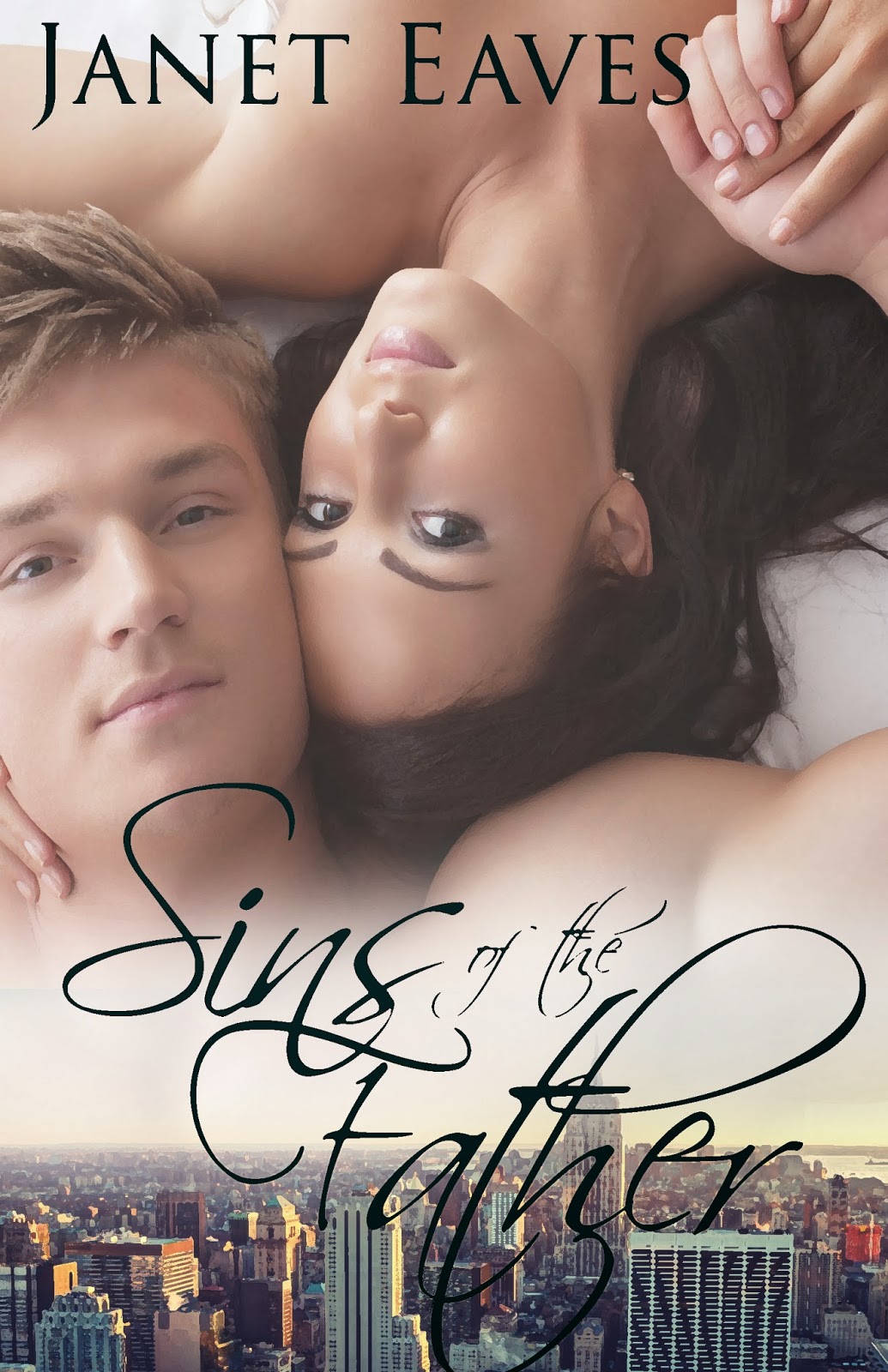 "What an incredibly bea-uuu-teee-ful child!"
Jorge and Leigh DeLaCourt threw startled glances at each other over the head of their infant daughter. The comment was something they'd gotten used to hearing time and again since her birth six weeks earlier, but not shouted, and not said with such disgust. They didn't look to acknowledge the owner of the voice. The comment and tone, under the circumstances, was glaringly inappropriate, but being the people they were they graciously ignored the interruption and focused on the moment.
They stood beside the baptism basin located at the front of the ornately decorated, gilded sanctuary they'd donated millions to fund as their priest spoke in Latin to bless their new baby. Doting on each other as much as their new miracle, they locked gazes as family and friends, and even local, state, and national politicians looked on.
The press was there in numbers, too, tucked up in the balconies though only one special photographer was present. He and he alone, would get the exclusive close-up shots of the baby girl. The pictures would then be sold around the world. The proceeds from those greedily awaited pictures had already been promised to the DeLaCourts pet charities. From Children without Corn, to Pet’s Without Partners, and all those fortunate charities in between would benefit from their generosity.
Of course the media had deemed the DeLaCourts the Golden Couple years before, and now, after a decade with only each other to adore, Aurora was their Golden Child. Their lives were blessed. Everything they ventured had turned to gain. And it never occurred to them that it would change. After all, they were considered self-made American royalty.
Genteel.
Polished.
Untouchable.
Beside them stood Phillip and Jessica Princeton, their dearest friends and the godparents of their sweet Aurora. Tall Phillip cuddled tiny Jessica as she held their toddler in her arms. With sophisticated grace they listened to the priest, and then vowed to play their role in young Aurora’s life. Their son, named Phillip just like his father, was also a beautiful child with his riot of curly chestnut hair and deep brown eyes with their unfairly long, dark lashes. And though he was but a few years old they all knew that one day he would take over for his father and run the family’s variety of businesses.
Both couples, while awaiting the blessed event of Aurora’s birth, had planned together that they would encourage a union between their children when they were of age, thus joining two great families, and two great commercial empires.
Even now, when the couples got together, as they often did, the babies shared a playpen as their parents had high hopes of garnering a close relationship between the two from the start. Little Phillip was enthralled with the new baby, and treated her with gentle adoration. And little Aurora seemed just as fascinated with him.
Everything was just perfect.
Rustling sounds heralded the closeness of the stranger who had made the comment. With the long sleeves of her deep blue choir robe swinging, she pushed others, including the Princeton's, out of her way until she stood before the DeLaCourts. With her face pocked with sores and her eyes red with rage, she pointed a snarled finger at Jorge and began screaming, startling everyone clear to be back of the cavernous room. “I will ruin her! Just like your father ruined my son, Jorge DeLaCourt! I will end her reasons for living before she lives to see her twenty-first birthday! Then you will lose all, as have I!”
She reached into the loosely hanging folds of her robe and chaos broke out in the sanctuary. Words like, “Gun! Watch out!” and “Everybody get down!” were yelled as men dressed in black suits with stark white shirts appeared, forcibly removing the writhing, screaming woman from the sanctuary. Her last words, before the large wooden doors closed her out, echoed throughout the room, bouncing off the thirty-foot, ceiling, painted with Biblical scenes.
“She will cease to exist, just like my son!"

Twenty years and six months later…
“Aurora, sweetie, you must stay home where it’s safe.”
Aurora Rose held the curses inside, though she was furious to have gotten caught trying to sneak out the kitchen door. She was mostly furious that she’d had to sneak in the first place. She turned to her aunts, ready to repeat words she’d said time after time. But she was more determined than ever to have her way this time. Her few friends had promised a good time and she’d told them she would be there.
“I am an adult and I’m not going to get into any trouble. You all know this. You have to stop trying to run my life.”
What she hadn’t said was that they were not only determined to run her life, they were ruining it as well. She was the only college junior she knew of who’d had no social life at all while going to high school, nor while attending college and before long, her opportunities at being a kid would truly be over.
The little social life she’d had to this point had very little to do with fun, and everything to do with schmoozing those who could help her launch her career as a clothing designer. She was tired of all work and no play. Mostly she just wanted to hang out with people her own age, not the aunts, nor the professors who thought of her as their star pupil.
It was great that she was considered a gifted designer. It was after all her dream to have a show at Fashion Week in the City within the next couple of years, but she was really tired. And stressed. And getting old before her time.
And it was all because of three old women.
Aurora knew she was just going to have to put her foot down. She looked from one aunt to the next, and then to the last, and felt her heart soften. There was no way she could fuss at the women who’d stood guard over her, as much as raised her, since infancy. Their care had always been as consistent as it finally became curious. At times, even quite odd.
Her parents had gotten involved in something the aunts would never talk about. But whatever the deed had been, it had kept her from ever getting to know them. Of course she’d envisioned everything from murders to drug abusers, but the aunts never confirmed nor denied her guesses. They could, and had, clammed up completely anytime her parents were mentioned, until finally, somewhere around the seventh grade, she’d just stopped asking.
But as stubborn as they could be, not a one of the aunts had a mean bone in their frail, bent bodies, which prevented Aurora from pushing at them too hard. It was just that she wasn’t as old as them and she needed a life! Desperately.
“Please,” she pleaded softly. “It’s only a dance. I’ll look around me at all times. I have my mace. And I’ll be back in a few hours.”
The three elderly women looked at each other and Aurora’s heart sank at the fear in their eyes. She knew what that meant, and the anger resurfaced. “I am tired of being a prisoner. Nothing will happen to me! I am an adult now and you cannot stop me!”
The oldest of the three moved towards her, and took her right hand in a soft grip that felt like satin-cloaked steel. She stared deeply into Aurora’s eyes. “My dear, evil is out there. Just waiting for an innocent, unsuspecting girl like you. You know what I’m talking about. If you leave our protection, that evil could find you, and fall upon you.”
Aunt Riona’s violet eyes mesmerized, hypnotized, until Aurora shook her head and broke the strange connection. She didn’t know how the old woman did it, but those eyes had stopped her time and again from doing the things she’d wanted to do, all her life. Well, not tonight! She pressed her lips together and counted to ten. She couldn’t go along with their foolishness any longer.
“Aunt Riona, I love you, and you, Aunt Millie, and you, too, Aunt Juniper,” she said to each in turn. She turned back to the leader of the little group, careful not to look her directly in her eyes, focusing instead on the kitchen’s door over her head. “You have to stop this. I’m not a little girl anymore and I don’t believe in your stories of some old witch cursing me when I was an infant, just because I was a beautiful baby. It’s completely ridiculous!”
Aunt Millie moved forward, taking her other hand. When they played Good Cop, Bad Cop, Aunt Millie was always the good cop to Aunt Riona’s bad. Aurora sighed, knowing she would have to listen in spite of her desire to flee.

My favorite fairy tale is Sleeping Beauty! I love Disney's interpretation of it...and your modern day rendition is superb!

Thanks so much for stopping by, Renee! I've heard Janet stopped by as well but was having difficulty signing in. Perhaps she'll make it later!

What a wonderful collection of stories in this Boxed Set!

Janet's stories are always compelling, and it's great that you ladies have put together such a wonderful collection. Best of luck with it!

Thanks, Maddie, for the feature! and thank you all for poppi1ing in! It's so much fun being in the company of so many wonderful authors!

Haha! I finally got it to accept me and my comment is full of typos!

It was a pleasure to have you, Janet! And so nice to see you here today JC and Magdalena!