My latest released -- ENTRANCED, The Legend of Blackbeard's Chalice, Book One 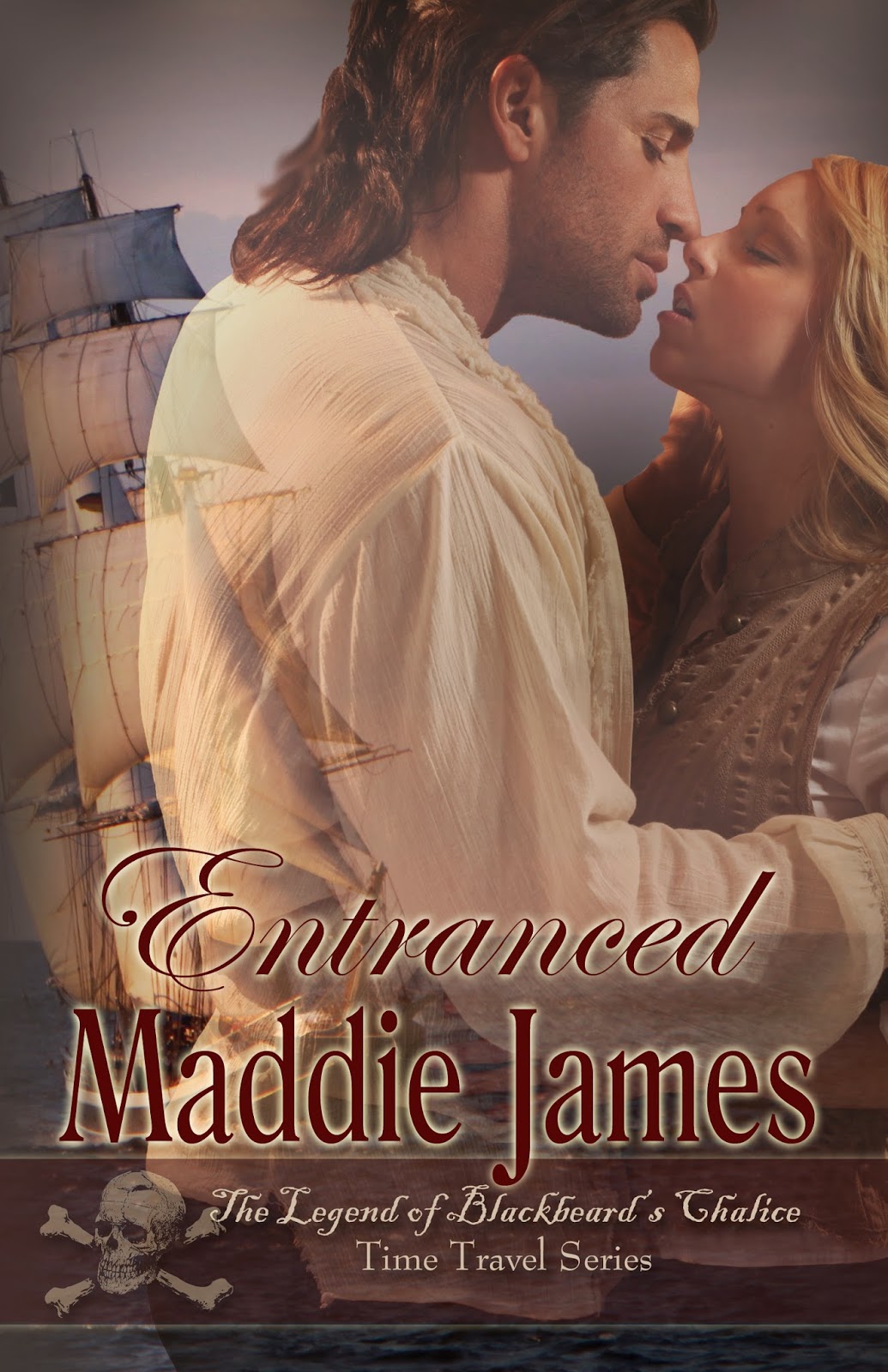 Welcome to my latest release!
This week, the first book in my time travel series, The Legend of Blackbeard's Chalice, is being released! I'm excited to bring this five book series to you.

I will be posting more as the week goes on, providing you with excerpts and other tidbits about the book -- and stay tuned for a giveaway!

THE LEGEND OF BLACKBEARD'S CHALICE, Book One -- Time Travel Romance

Can souls touch through time and hold on when all odds are against them?
Claire Winslow vacations on an East Coast barrier island, content with her life and her potential future--until the illusion of a man walking the misty shore haunts her. Then one kiss--a beautiful, soulful, stolen kiss in the night--and her life changes forever.
Nearly 300 years past, Jack Porter is in hot pursuit of his kidnapped wife. Not an easy feat considering the year is 1718 and the kidnapper is the notorious pirate Blackbeard aka Edward Teach. Determined to rescue his wife and take the pirate's head in the process, Jack steals aboard the pirate's ship to save her.
Entranced sends Jack and Claire on a wild search through time, not only for the resolution to a powerful attraction between them, but also for a historical artifact that holds the key to their future happiness--the coveted silver-plated chalice made from Blackbeard's skull.

My good friend Renee Vincent has a new release today and I thought I would share on my blog, because this is a fabulous deal for three incredible books. If you like historical romance of the Viking kind, you will love this trilogy. And for a limited time, the complete set is only $0.99. Grab it while you can!

One man risks his life to save her.
Another risks his heart to love her.
Who will be the victor? 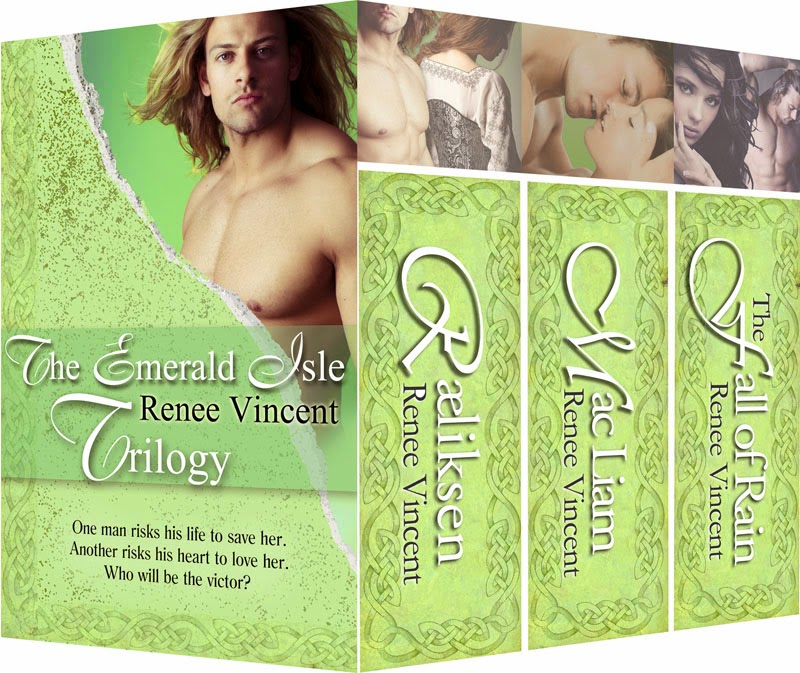 Full of fast-paced adventure, unforeseen plot twists, and courageous, to-die-for heroes like you’ve never read before, this extraordinary boxed set is sure to satisfy every readers’ craving for the ultimate in historical Viking romance.

Ræliksen, Book 1
Mara, the daughter of an Irish clansman, was raised to believe the men of the North are heathens - murderous pagans without a moral bone in their bodies. Despite warnings of the Northmen's raids, and the growing threat of another incursion, Mara is continually drawn to her favorite place - the River Shannon.

Dægan Ræliksen, a wealthy chieftain from Norway's frozen fjords, secretly discovers Mara at the water's edge. He is charmed by her beauty and sensuous grace. As the days pass, his contentment with simply watching her grows thin. He can no longer deny his unabated desire for the young maiden. His search for a wife has ended.

However, Mara and Dægan come face-to-face in a time when Ireland is in turmoil - when every Irishman is being called up to fight against the Nordic foreigners. In these times of upheaval, how can Dægan make peace with Mara's father and acquire the woman he treasures? Furthermore, can Mara move past her fears and find the noble man within the savage?

Teaser Quote:
“You are correct in saying that desires often come from things we cannot easily gain—mine, being that of your love. By all accounts, I do wish I could steal it. But I am not that sort of man. I will wait. Forever and a day…I will wait.”

Reviews:
"This is my first read by Renee Vincent and she has undoubtedly earned a place on my auto-buy author’s list. This book and author earn my highest recommendations and I feel privileged to have read one of the best.”
~ 5 Stars TOP PICK ~ Night Owl Reviews

"…a fast-paced, action-packed historical romance, which Ms. Vincent brings to life right before your eyes; a story you will remember long after the last page is read."
~ 5 Blue Ribbons! ~ Romance Junkies

Mac Liam, Book 2
A tortured soul…
Breandán Mac Liam, the strapping young hunter from Ireland’s lush forests, is in love with Mara, an ineligible beautiful princess. For seven long years, he has been vividly haunted by her memory, taunted by the throes of his heartache. And not even the thought of her marriage to a Northman can extinguish the fierce, burning desire running rampant through his heart and soul.

An innocent heart…
Mara, the spirited Connacht princess, has no idea she is the object of the Irishman’s longing. She is living out her days on Inis Mór, raising a troubled son and trying to endure the cruel loneliness that afflicts her.

A deadly secret…
Ordered by the king on his deathbed, Breandán must return to Mara and bring her through the perilous lands of Connacht to fulfill her father’s last dying wish. But as their worlds collide, Breandán not only finds himself wrapped in the arms of Mara’s embrace, but thrown into a struggle to defend his honor.

With Mara caught between the family she loves and the father she knows, can Breandán uncover the mystery of her past and still protect her from a secret that threatens them all?

Teaser Quote:
“Mara, you are my next breath. You are the reason I breathe at all.”

Reviews:
"This is one fantastic historical…a must-read for anyone who enjoys historical romance and I cannot wait to read the final book of the trilogy as this story has stayed with me days after I read the last word."
~ 5 Hearts "5 Heart Sweetheart Award" ~ The Romance Studio

“Ms. Vincent surpassed all of my expectations with her impressive writing abilities, while offering more incites and revelations that will keep readers coming back for more. Readers should be warned of the emotional turmoil they will face once again while reading this incredible story. I eagerly anticipate the next story in this trilogy, yet already mourn the finality."
~ 5 Stars TOP PICK ~ Night Owl Reviews

The Fall of Rain, Book 3
Leif Dæganssen, an archeologist from Norway, is determined to trace back his Scandinavian roots as far as the Dark Ages and find proof of their existence on the Emerald Isle. After several years of living off the west coast of Ireland, he finally uncovers an ancient artifact—an intricately decorated chest with pagan carvings—buried beneath the very porch of his coastal cottage. Knowing it only confirms the presence of a glorified Norse-influenced settlement on Inis Mór, he’s determined to establish a link between himself and those who once inhabited the rugged isle.

For as long as she can remember, Lorraine O’Connor has had dreams of a Norse warrior kissing her. And even though she’s never fully understood the reason for her vivid subconscious imagination, she welcomes the meaningless and wanton pleasure of being in a Viking’s protective embrace—until the day she meets that brazen Northman on an impulsive vacation trip to Ireland.

Though blindsided by the relevance of her dreams and the strange familiarity of the man within them, Lorraine can’t help but feel a deep-seated intimacy toward Leif. And the more she gets to know him, the more she’s convinced they’ve shared a life together in a time long forgotten.

Are the clues to their ancestral past hidden within the contents of the chest or buried deep within their hearts?

Teaser Quote:
“What Lorraine has told you is the honest truth. There’s no denying who you are. But until you go in that house and dig up the evidence for yourself, you’ll never know who you used to be. Oh, I know you’ll realize it one day. By then, I fear it’ll be too late. So, don’t be a fool and let the only woman you’ve ever loved slip through your grasp. Three days, Leif.”

Reviews:
"I didn't believe it was possible to take Daegan and Mara's incredible love story to another level, but I am extremely pleased to be wrong. Every word seemed to have a purpose in helping create a beautiful and poetic ending to an unforgettable trilogy. If you've never heard of the name Renee Vincent then you're missing out on quality reading that's worth every second of your undivided attention. It's an escapists dream and I will most certainly be back for more."
~ 5 Stars TOP PICK ~ Night Owl Reviews

"An ingenious ending to an amazing trilogy! This series has become my all-time favorite."
~ 5 Blue Ribbons ~ Romance Junkies

Author Bio:
RENEE VINCENT is a bestselling Contemporary & Historical Romance Author. From the daunting, charismatic Vikings, to the charming, brazen Alpha male heroes of modern day, you’ll be whisked away to a world filled with fast-paced adventure, unforgettable romance, and undying love.

She also writes lighthearted, fancy-free Chick Lit Romance as GRACIE LEE ROSE. For those who love to read fun, wholesome, and endearing romantic stories (with a smidgen of spunk) that your mother, sisters, friends, and daughters can enjoy.

Posted by Maddie James No comments:
Email ThisBlogThis!Share to TwitterShare to FacebookShare to Pinterest
Labels: Authors

I'm on tour this week! I'm celebrating the release of a new boxed set of 8 romantic comedy novellas, The Matchmaking Chef Collection. I'll be featured on the following blogs and sharing some excerpts and character interviews from these stories. I hope you will come by and visit!

p.s. I'm also giving away a complete ebook set of the stories. Details available at each of the stops. Good luck!