Meet Jennifer Anderson, author of My Brother's Wedding in the Sweet, But Sexy boxed set 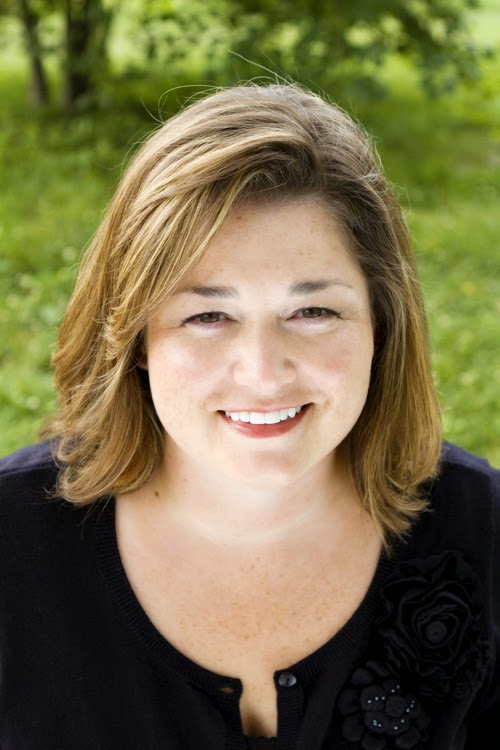 My Brother’s Wedding wasn’t a story I was dying to write. In fact, I didn’t have a clue it lingered in my head until I was attending a TMP meeting. Our boss was describing changes with our new category romance lines and she explained how all the books within each line would have similar covers. For example, Next Door covers would be a blue wavy design with the title at the top and the author’s name at the bottom but the middle pictures were customized for each book. She shared mock-ups and used me for one of them. And she titled this fictitious book My Brother’s Wedding.
The more I stared at the cover and enjoyed seeing my name and title on the cover, the more I hashed out a story in my head. As you might know from my Honey Creek stories, I’m a huge fan of the boy next door type of stories. High school loves. People who share a past. Maybe it stems from my own relationship with my high school sweetheart or maybe I’m just a romantic who likes to keep it close to home! Who knows. But as I began writing the story, I knew I wanted to feature St. Louis. In fact, the coffee house, MoKaBe’s, Ryan and Allison share lunch at is one of my favorite places in St. Louis. And the bridal shop is the very location I purchased my own wedding gown many years ago.
Originally, the story evolved into more of a women’s fiction book, which never felt complete to me. I want romance. I want my characters to have a HEA ending. So with some cutting and deleting, I finally arrived at the sweet story we have today. 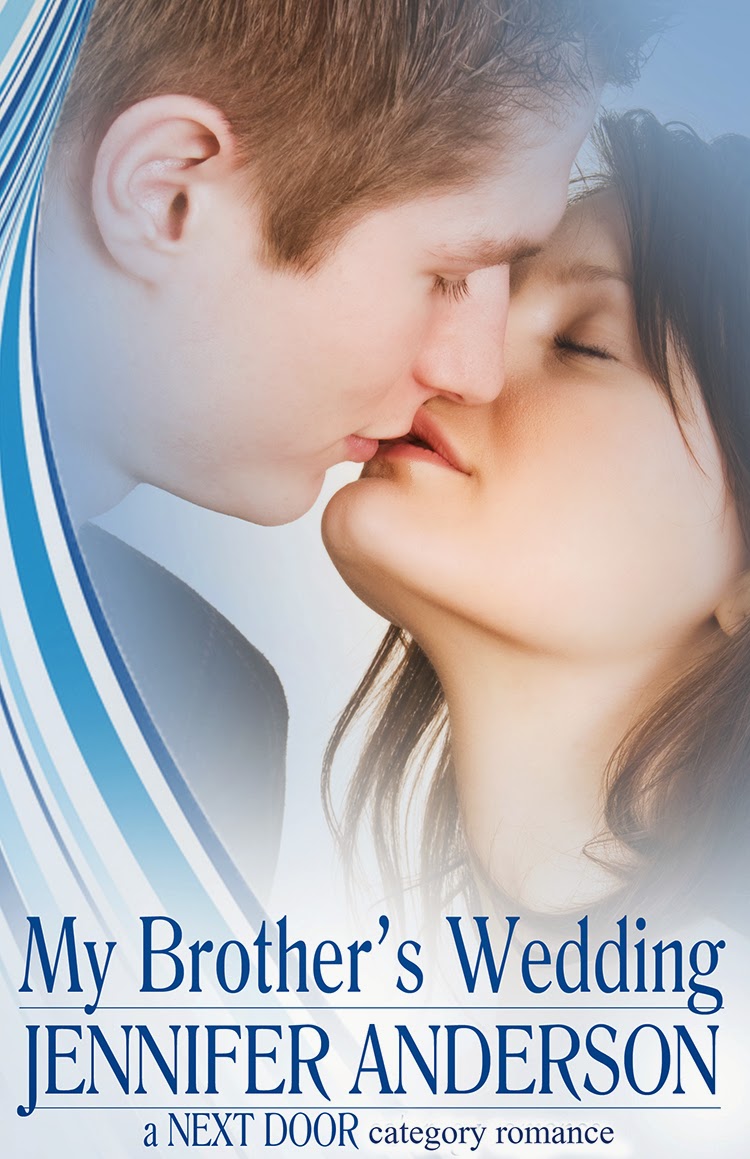 Allison Daughtry is catapulted into a past life when she returns to her childhood home to attend her brother’s wedding. Bombarded with memories of a night she’d shared with Ryan Johnson, her reason for leaving and forever crush, she attempts to navigate her feelings while maintaining a fake romantic relationship with her best friend. Complicated emotions surface and Allison struggles to remember what’s real.

“Adam, this is George Fitzepatrick. He’s my…”
“Boyfriend.” George stepped forward and thrust his hand in Adam’s direction.
Adam looked back at Allison’s guilty smile. “A boyfriend? I didn’t know you were seeing anyone.”
“Yeah,” Allison replied, fighting to find better words. She stepped back from her brother’s hold, feeling his arm fall from her shoulders. “Surprise. Your sister is dating someone.” She shrugged hoping he’d interrogate her later.
“Since we work together, we’ve kept our relationship a secret. Although, now that we’ve both taken off at the same time, I’m sure everyone will know,” George offered.
Allison was grateful for George’s quick words. She hadn’t rehearsed her part well. In fact, she arrived in St. Louis unprepared for any sort of questioning about her relationship with George. Rooky move on her part. Her mother listed off questions when she called a few weeks prior to announce her plus one. Then, Allison offered simple, short answers not giving up many details. She’d hoped her mother relayed her answers to Adam. Obviously not.
Adam released George’s hand and looked back over his shoulder at his sister. Allison swore his eyes reflected hurt. She couldn’t risk telling Adam the truth. She needed to get through the week and George, her pretend boyfriend, was the only way. Once she was safely sitting in her lonely apartment in Chicago, she’d confess to her brother. She’d tell him how George was her only friend in Chicago. That her long hours at work kept her out of the dating scene and the highlight of her day was sharing lunch with a hot guy who couldn’t careless how she looked naked. She’d also add how George preferred, rather insisted, on dating men.
Mrs. Daughtry shook her towel at the small group forming in her kitchen. “You three go sit down and I will make you a plate.” Her mother moved to the stove and stopped. “Where’s Sarah? I’m sure she’s hungry, too.”
“She got dragged into the dining room by Crazy Aunt Phyliss. Something about wedding hair or I don’t know. Girl stuff.”
“You just left her alone with those people.” Allison stared at her brother in disbelief and concern.
“Excuse me,” their mother interrupted. “Those people are family.”
“Yes, Mom, but they’re crazy.” Allison turned back to her brother. “You have to save her.”
Adam waived at his sister. “Nah. She’s tough. Plus, she likes them all, for some reason.”
Allison gagged. “Maybe you should get her checked out. She’s sounds like she’s getting a little nutty. You don’t want to have babies with a nut job.”
“That’s enough you two. Now,” Mrs. Daughtry grabbed her son’s arm and pulled him toward the small kitchen table. “Sit, eat and I’ll bring Sarah a plate.” Their mom slid plates in front of Allison and George loaded with steaming beef, potatoes and carrots. “There’s plenty on the stove.”
“Yes mom,” they both offered. Adam hunched over his plate with both elbows rested at his side. Allison snuck a peek at George and watched him push the food around with his fork. His usual lunch consisted of a diet soda, salad or a piece of fruit. In fact, her lunch had consisted of mainly the same due to the limited funds and lack of time to eat. George caught her watching, smiled and shoved a piece of roast in his mouth.
After fifteen minutes of being hunched over a plate, Adam sat back, rubbed his belly and grunted in approval. “Mmm. Good.”
“What’s good?” A new voice asked from the kitchen door.
Almost in slow motion, Allison turned her head, sending her ponytail flying. Her eyes began their feast. Dark jeans sat low on a slim waste followed by a pale blue button-up shirt with a v of a white T-shirt winking at her. His teeth almost shined like a prince in a cartoon with a sparkle from the track lighting fixture dancing in his dark eyes. A hand ran through the slight curl in his brown hair, tousling the locks before they fell against his temples.
A gasp escaped her lips.
Ryan Johnson.
*** 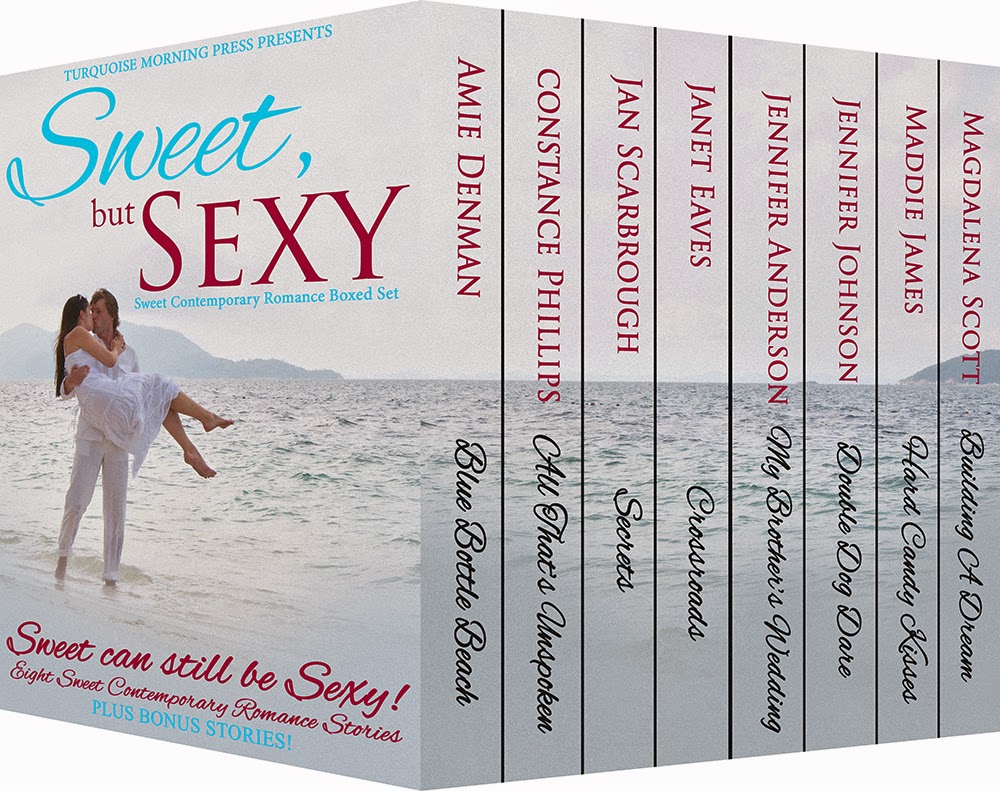 My Brother's Wedding, is now available in the Sweet, But Sexy boxed set -- only 99 cents for a limited time at all ebook retailers! Get yours now at Amazon!