Cheryl Norman Talks about her book Running Out of Time

Cheryl Norman is visiting today to talk about her time travel novel, Running Out of Time, one of the seven books included in the paranormal boxed set, Enchanted Lover.

Here's the books description for Running Out of Time. 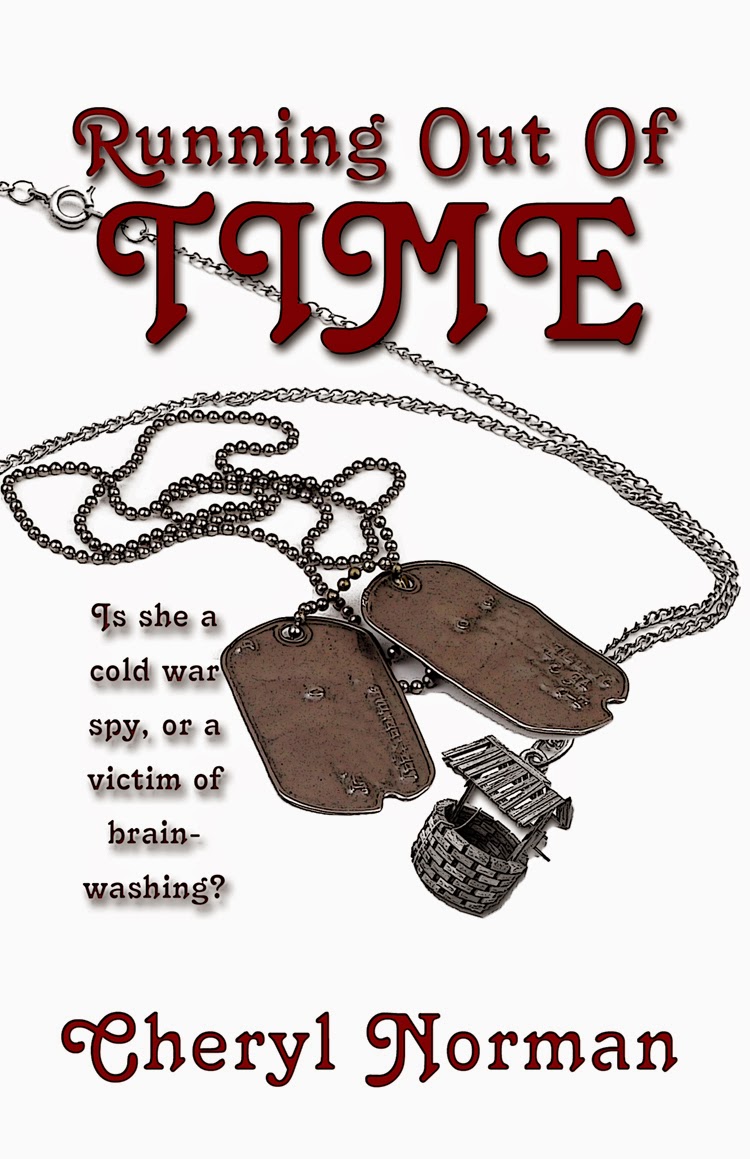 When Stacy Webber travels to Germany for her best friend’s wedding, she loses more than her luggage and purse. She lands in a different time, fifty years ago, with no idea how to return to her world. The only people who speak her language are suspicious military personnel who either want to arrest her or commit her to a mental hospital.

MP Sergeant Douglas “Brad” Bradley, charged with keeping Stacy in custody, doesn’t know whether she is a clever Soviet spy or a victim of brainwashing. In spite of her wild claims of being from the future, he knows she’s no time traveler. She’s a beautiful young woman who seems genuinely vulnerable, but it could be part of an espionage act. Brad can’t decide whether to handcuff her or kiss her.

When Stacy figures out the purpose behind her jump through time, she faces a difficult and dangerous decision. Can she sacrifice her future to save Brad’s before it’s too late?


RUNNING OUT OF TIME, my time travel novel that's included in the Turquoise Morning Press's Enchanted Lover boxed set, takes the heroine back fifty years to West Germany during the Cold War. Younger readers may have missed the Cold War. Some of us remember the tension and terror of the constant threat of nuclear war. Scary times.

Take fifty-two years ago this month. Perhaps you've read or seen history programs about the Cuban Missile Crisis. I was in junior high school and the crisis is permanently etched in my memory. On October 14, a U-2 spy plane shot photographs proving that Soviet missiles were being erected in Cuba. To prevent alarming the American public, and to conceal his evidence from the U.S.S.R. (and some say, for political timing because of the upcoming midterm elections), President John F. Kennedy kept the buildup of Soviet missiles in Cuba a closely guarded secret. On October 17, a second U-2 plane photographed more missiles, missiles with enough range to strike anywhere in the continental United States.

Diplomacy failed on October 18 when Andrei Gromyko denied any buildup of military weaponry in Cuba. Rather than confront him with the evidence, President Kennedy maintained secrecy and met with the Joint Chiefs of Staff on a course of action. As a teen, I knew only what the president told us in his televised speech on October 22. The United States would quarantine the island of Cuba (a nice way of saying "blockade") until the missiles were removed. It wasn't until years later I learned how frighteningly close we came to war. The military wanted to invade Cuba, and who knows what would've ensued.

Fifty-six USNC warships and eight aircraft carriers circled the waters around Cuba enforcing the quarantine. As I remember it, the next few days were the most stressful of the Cold War. U.S. military bases worldwide were on high alert. Nuclear war seemed imminent when a U-2 stationed in Alaska wandered into Soviet airspace and encountered Soviet fighter jets. Fortunately, the U-2 escaped and returned unharmed, but not before a group of American fighter jets launched. In Cuba, a U-2 was shot down. The nation was on edge, and I suddenly wished my dad had built that fallout shelter we'd seen on television.

Eventually, both the Joint Chiefs of Staff and Premier Khrushchev backed down from their military threats and reached an agreement. The Soviets would dismantle and remove all missiles from Cuba and the United States would lift its quarantine and remove missiles from Turkey. By the end of November, all Soviet missiles were gone from Cuba. One year later, President Kennedy was dead and by October, 1964, Khrushchev left office. He never recovered from losing face. Backing down from Kennedy was viewed by party leaders as a sign of weakness for the USSR.

My story takes place in the weeks following the Cuban Missile Crisis and is set in an actual U.S. Army base in Germany. It isn't a good time or place for a modern time-traveling Hooter's girl! 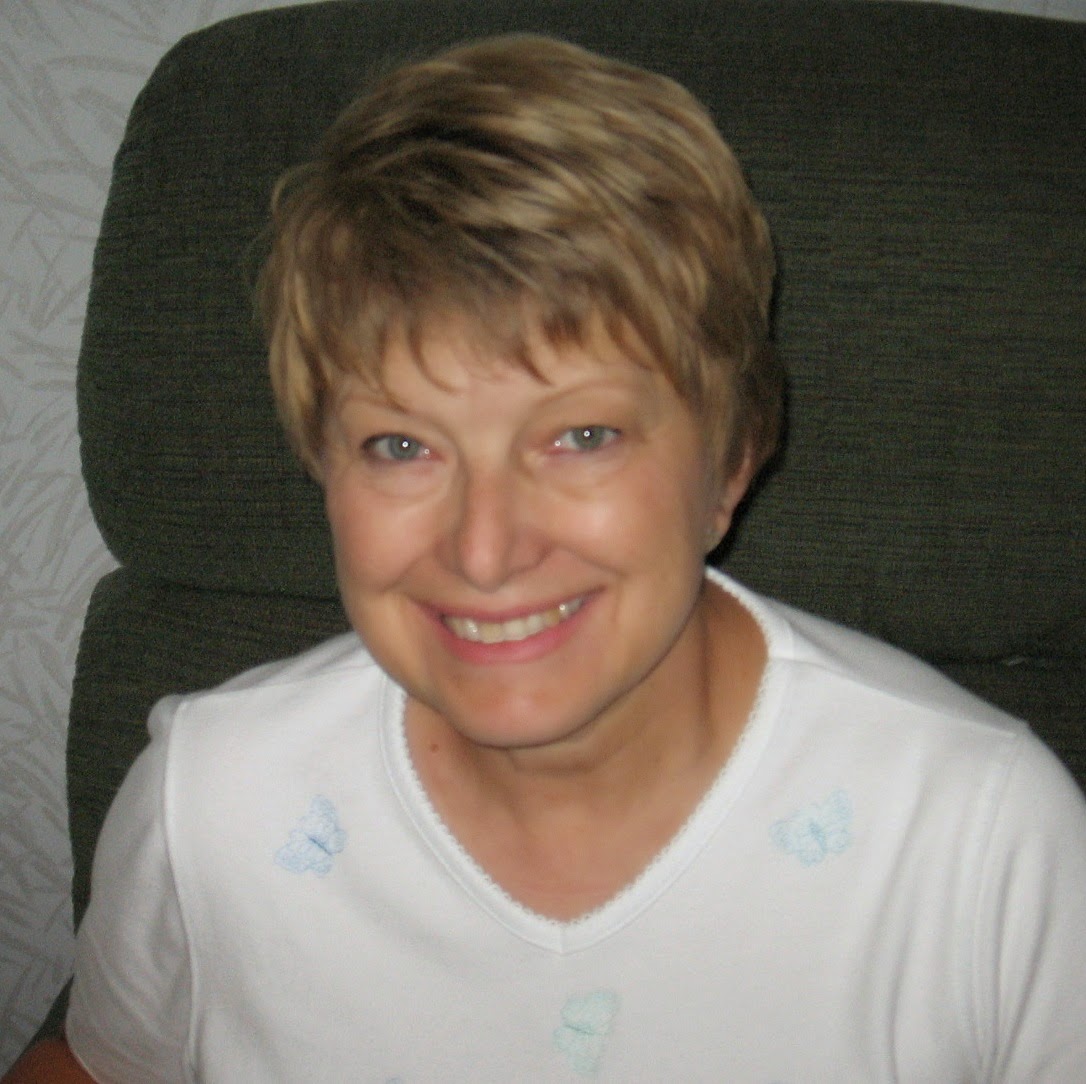 Cheryl Norman grew up in Louisville, Kentucky, and earned a BA in English at Georgia State University in Atlanta. After a career in the telecommunications industry, she turned to fiction writing and won the 2003 EPPIE award for her contemporary romance, Last Resort.  Her debut with Medallion Press, Restore My Heart, led to a mention in Publisher's Weekly as one of ten new romance authors to watch. Running Scared, a romantic suspense set in Jacksonville, Florida, and Washington D.C., received a Perfect 10 from Romance Reviews Today. Reviewer Harriet Klausner calls her writing "Mindful of Linda Howard." She currently writes the Drake Springs series romance novels for Turquoise Morning Press.

Her passion for cooking and healthful eating led her to write four cookbooks and an award-winning blog, The Hasty Tasty Meals Kitchen (hastytastymeals.com). She also offers writers grammar help via her Grammar Cop blog, newsletter articles, and workshops.

In addition to writing fiction and cookbooks, Cheryl works with other breast cancer survivors to raise awareness about early detection and treatment of the disease. 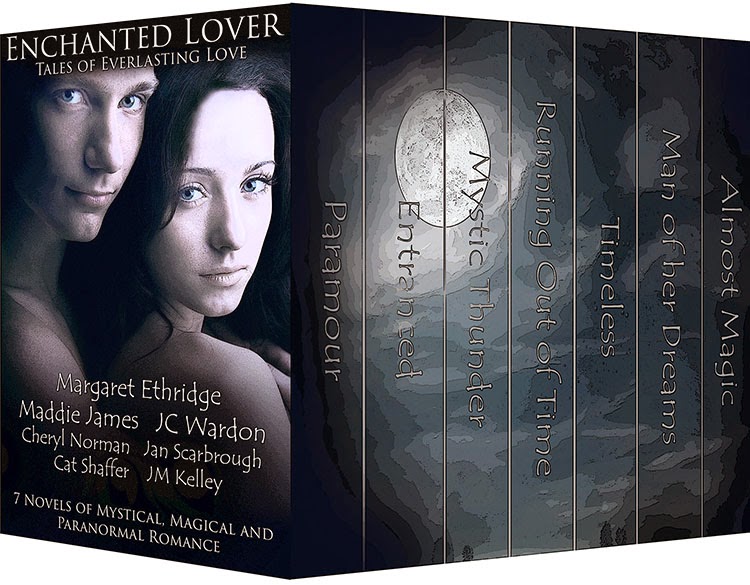 PARAMOUR by Margaret Ethridge (ghost)
Two men: one living, one dead, and both vying for her love. Camellia Stafford has never been alone in her room. For twenty years, she's been engaged in a fierce power struggle with her bedroom's previous tenant, Frank DeLuca, the ghost trapped in the light fixture above her bed.

RUNNINGOUT OF TIME by Cheryl Norman (time travel)
When Stacy Webber travels to Germany for her best friend's wedding, she loses more than her luggage and purse. She lands in a different time, fifty years ago, with no idea how to return to her world.

MANOF HER DREAMS by Cat Shaffer (dreams, parallel times)
Jessi Flint has a perfectly good life with a successful business and the perfect man. So, he's only in her dreams...until her flaky assistant goes to a New Age fair and Jessi suddenly begins receiving gifts with love notes signed by a mysterious Damian.