New price for boxed sets -- great #deal for the holidays!

Looking for some holiday deals? I just *permanently* lowered the price on two of my boxed sets. These are great deals because you are getting multiple books for much less than you would buy the books individually! It's also an economical way to try out my work, if you have not read me before. 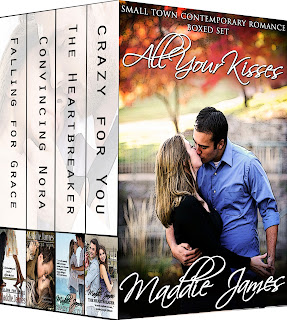 THE HEARTBREAKER is back in town…Lucki Stevenson coaches unruly teenagers and avoids the unwelcome advances of a co-worker in her Parks Department job. So when all-grown-up, boy-next-door, Dr. Sam Kirk moves back into his childhood home, she doesn't hesitate welcoming him back into town. But Sam broke her heart once and she won’t give him a chance to do it again. Right?

CRAZY FOR YOU. She’s Tofu. He's Beefsteak. Modern-day flower child, Tasha Smith enjoys her laid-back life selling organic fruits and vegetables, even though lately she’s been in a funk over a broken engagement. Determined to shake her blues, she heads down to a resort in sunny Jamaica, and along the way, hooks up with a most unlikely companion—a workaholic salesman who has no idea how sexy he looks in his Brooks Brothers suit!

CONVINCING NORA. Dr. Caleb Wyatt thinks the peaceful little town of Greenfield is the perfect place to start his veterinary practice…until the morning he opens the doors of his animal clinic. Mrs. Pierson’s poodle has been looking for love in all the wrong places—not to mention a colicky calf, a yellow-tinged iguana, and a bird-eating cat are wreaking havoc with his business. In short…chaos! Until he hires the lovely and quite organized, Nora Jamieson.

FALLING FOR GRACE. Former ballerina Gracie Hart is known as the Diva of Romance. The owner of a successful, sophisticated boutique called Romantically Yours, she lives a quiet life, healing from the tragedy that took not only ballet from her, but her fiancé, as well. Who would have guessed that she has no intention of ever falling in love again, no matter how loudly her biological clock keeps ticking?

Perfectly Matched ...and the rest of the Matchmaking Chef Stories. 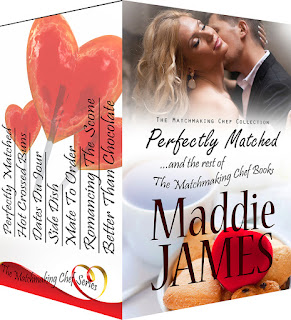 When Suzie Matthews (Bed, Breakfast & You) accidentally cooks up a scene that causes her sister to get back together with her high school boyfriend (Home for the Holidays), she wonders if she can help other singletons living in the small mountain town of Legend, Tennessee find the loves of their lives. Being a matchmaker isn’t really on her list of things to do—after all, she has a bed & breakfast to run, cookbooks to write, and a television show on the Food Channel to keep up with. But baking is her thing, and perhaps matchmaking can be her thing, too.

Welcome to Legend, Tennessee. And welcome to the matchbaking, er, matchmaking world of Chef Suzie Matthews.


Both sets are now permanently priced at $3.99. A great deal for the quantity of stories you will receive. Plus, some awesome reads! I hope you enjoy.
Posted by Maddie James No comments:
Email ThisBlogThis!Share to TwitterShare to FacebookShare to Pinterest
Labels: maddiejames, romance 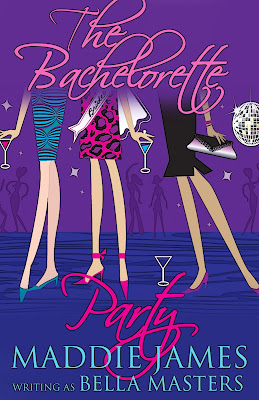 Double Trouble for the Wedding Planner
Mary Kate Wells refuses to admit that she's innocent. She has had sex, she's here to tell you. But the truth is, when Johnny the Stripper calls the day of the bachelorette party to confirm his appointment later that night, the sound of his voice saying, "Hi, Mary. My name is Johnny, and I'll be your stripper this evening," jerks her libido into full-speed ahead like nothing she'd ever felt before. And then when Johnny arrives with his twin brother Shawn at his side, the fire in her gut could only be put out by one thing--no wait, two.

Runaway Bride
Lainie Wells will get married. She will, she will, she will. It's perfect. He's perfect. Her life will be perfect. Bleh, bleh, bleh. Thoroughly confused and utterly disgusted with herself, she's resigned to impending marriage. Besides, Mary Kate has everything planned and her father has footed an astronomical bill thus far. She will, she will, she will. And she keeps saying that all the way up to the point where her ex-lover and maximum curler of her toes, Simon Shepherd, takes the stage during the drag show, links gazes with her and won't let go, and later feels her up back stage until she's spent and more. Suddenly, "I do" feels more like "I don't." But Simon left her two years earlier, telling her he was gay. Why is he coming after her now?

Ghostly Encounter of the Ménage Kind
"I just wanna get laid. And good." As Dee looks up from her drink while sitting in the luxurious bar at the Seelbach Hotel after the uneventful-for-her bachelorette party, she swears a man is staring back at her in the mirror. Their gazes connect and hold, she turns, but no one is there. The sexual titillation that runs through her body at that moment frightens her almost as much as the fact that she's pretty darned certain she's seen a ghost. Earlier during the party, as pictures were snapped with digital cameras, the women all proclaimed to see orbs circulating Dee's body. And Dee's alone. As the night rolls on, Dee experiences a ghostly encounter of the ménage kind that makes her believe in sex here, and in the forever after--which takes getting laid to a whole other level. 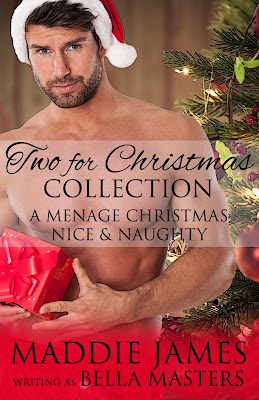 Two for Christmas
Two ménage à trois Christmas novellas in one package! This collection includes A Ménage Christmas, and Nice and Naughty -- first time available as a two-fer set!

A Ménage Christmas
Bree Noël Conner doesn't do relationships well. Like most men she knows, she has a straying eye that often gets her into trouble. She loves pretty men and frequently wants to sample them. That fact has gotten her into more trouble, and out of more relationships, than she'd care to admit. So, when she finds herself standing on an ottoman in an artsy-fartsy holiday party being auctioned off to the highest bidder (for a good cause, of course) and subsequently bound to a king-sized bed built for three, her merry Christmas quickly turns into a potential ménage Christmas--and her wandering eye might be satisfied, once and for all.

Nice and Naughty
Cassie Franklin has to prove herself. After all, she's the first female head of the English department at the university. But that doesn't mean she has to prove herself sexually to Eric Marsh, a fellow professor in the English department, too. Does it? Then there is Ryan. Strong and sexy, with hands that can ease away the tension of most any job, he almost makes her forget her risky escapades with Eric. And that Eric left her. Cassie discovers that Ryan and Eric have a closer connection than she ever could have imagined, and that they have very specific plans for her. Is she ready for two?