Tempt Me is today's #TuesdayTeaser! 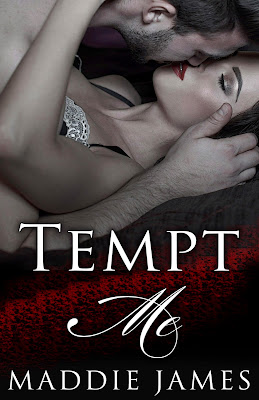 Jordan Cross stared into the eyes of the man sitting next to her. The dark depths drew her in, rendering her powerless to pull her gaze away. Country music spun around them in the crowded City Limits bar, as patrons jostled up to order drinks. She ignored them, concentrating on the sexy specimen in front of her.
She’d had just enough tequila to lower her inhibitions but not nearly enough to lose her clothes. Yet. She glanced behind the guy’s head to the bartender, putting up two fingers. “’Nother round,” she shouted. He nodded and Jordan turned back to reconnect with those fathomless, suggestive orbs.
Something dangerous and sensual tripped down her spine, playing over each vertebrae like the melody of a siren song. It had been a long week. She was due some down time. Deserved a night to play. Right? They sat facing each other, gazes locked, their barstools nearly touching. His black hair was tousled and unkempt, his equally black T-shirt tight across this biceps and chest. One of her legs draped over his thigh, his legs spread wide. Jordan hooked the pointed toe of her western-style boot around a stool leg and jerked him closer.
His face broke into a sexy grin.
The corner of her mouth rose in a saucy smile to echo his.
Oh yes, she fully intended to do exactly what she had been doing—one more time, and then some. To hell with being responsible.
“Where were we?” she teased.
“I was saying you need to stop or I…” He lazily leaned in and bit her lower lip, tugging on it with his teeth. He pulled back and let go when the bartender placed two more shots of tequila in front of them.
Jordan straightened. She licked then salted her hand, and grabbed a lime and her shot. In a one-two-three motion, she exhaled and licked the salt, downed the shot, and bit the lime. Expertly turning the shot glass upside down on the bar, she looked at him and said, “Ah. Fortification.”
He raised his shot, threw it back, and countered, “To fornication.”
Jordan nearly spit. “Not what I said.”
He snaked his hands around her waist and pulled her to the edge of her stool. “Doesn’t matter.”
“So about what I was doing.” She leaned in and purred the words, her lips grazing his whiskered cheek, leaving a moist trail of steam behind. Her gut jittery with the anticipation of sex, she trailed a forefinger up his inner thigh, tracing the seam of his jeans with a feather-light touch, all the way up to where the seams joined between his legs.
She held his gaze as her finger pressed on, lazily moving up and over his zipper.
His cock jumped. Jordan arched a brow and grinned. “This?” she repeated.
With a snap, his hand clamped over hers. “Yes.”
She flattened hers out over the heat of his bulge. “Sometimes being irresponsible is the fun part,” she whispered.
He squeezed her hand. “You have no idea what you are getting into, honey. You’re out of your league.”