Evolution of a Book Cover - Entranced by Maddie James - #ThrowbackThursday

Books and their covers can go through quite an evolution, especially in this new wave of self-publishing. I have a number of books that have gone through various stages of publication and revision, and re-publication--and plan to share those with you over the coming weeks during my #ThrowbackThursday posts. I also hope to share other author's posts about their backlist books on Thursdays. 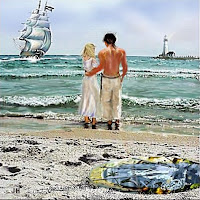 Today, I want to share with you the evolution to my book currently titled Entranced, which is book one in my Soul Mates Time Travel Trilogy.

In 1999 the book was published by a long gone and now forgotten ebook company that produced its books only on CD. The title of the book then, was Night Kiss, and written under my then married name. See the beautiful, original artwork at left that was used for the cover. Sad to say that the author copy CDs I received in the mail lasted longer than the company, and soon the rights reverted and the book lay fallow in my computer for a number of years. I thought it was dead in the water.

Then, in 2007, a new ebook publisher emerged and showed interest in the book. I shared that I also had proposals written for books 2 and 3 – were they interested in those as well? Resplendence Publishing published the revised first book, now retitled, The Curse, followed by the rest of the trilogy, The Cult, and The Quest. This cover had a vastly different look, focusing more on the time travel element, than the romance.

Several years passed and I toyed with the plots of books four and five, but never seemed to be able to get those written. The trilogy sold “okay” but could have sold better. I was so new at this new ebook game, I wasn’t quite sure how to market them. In addition, I was under multiple contracts and it seemed I could never get back to devoting time to write the fourth and fifth books.

Then, in 2010, I opened my own small publishing house (which unfortunately closed in 2015). Over time, I pulled all of my books from other publishers into my own house. I knew I wanted to hit this series again, but it had been so long since I had worked on them. Did I still have it in me to tackle the time travel series? I did. Night Kiss/The Curse, underwent extensive revisions, with the first third of the book heavily revised, and with new content added. Now titled, Entranced, I rebranded and revised the entire trilogy, and yes, books 4 and 5 are definitely slated to release in 2016/17!

Watch for news for the release of Wanderlust this spring.

Posted by Maddie James No comments:
Email ThisBlogThis!Share to TwitterShare to FacebookShare to Pinterest
Labels: #ThrowbackThursday 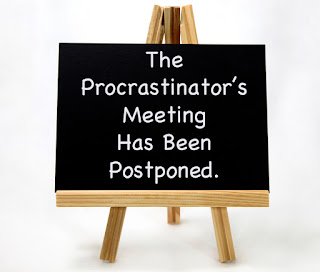 : to be slow or late about doing something that should be done
: to delay doing something until a later time because you do not want to do it, etc.  (from Merriam-Webster)

All those writers who suffer from this, please raise your hand. Now. C'mon. You too, right? And yes, I'm adding my hand to the mix.

I procrastinate. I think sometimes we writers call this "writer's block." I actually think they are one-and-the-same thing. I can't say that I've ever, truly, suffered from writer's block. What I do suffer from is putting the writing off. Finding something else to do before the writing.

Checking my sales numbers.
Reading a few blog posts.
Tweeting.
Reading my Facebook feed like it's the morning paper.

Laundry.
Dishes.
Swiffering the dog hair up from the floor. 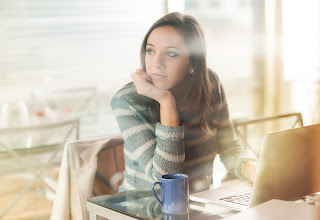 Procrastination. Not writer's block. Just putting it off.

Inspiration should always be striking. Right? I'm a writer. It's what I do. I need to quit blogging and get at it. Right?

Okay. Here I go. What keeps you from writing? Do you procrastinate or do you really suffer from writer's block? I'd love to hear your take on this subject. Comments welcome!
Posted by Maddie James No comments:
Email ThisBlogThis!Share to TwitterShare to FacebookShare to Pinterest
Labels: #writerwednesday

Morning folks! It's Monday so time for the mashup of all things going on with me. Hm... What's happening today?

Well first, you can find me guest blogging today over at Wild and Wicked Cowboys. Take a peek at my introductory post where you can find out more info about my sexy cowboys and their families. Ready to head out to Montana for a spell? I'm talking about my western books, what's out now, and what's coming. Mosey on over and take a peek. 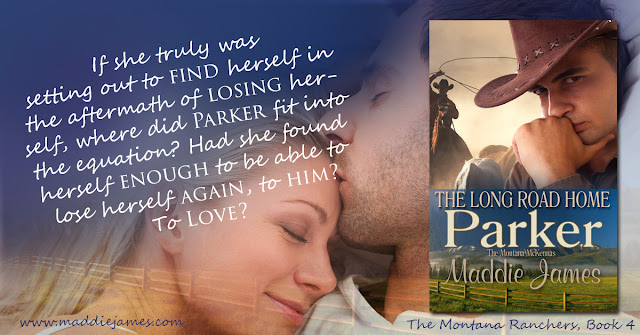 By the way, Parker is currently my top-selling book at Amazon. He's one fine brooding specimen of cowboy, isn't he? :)

Yesterday, the Soul Mates Trilogy was featured at My Romance Reads. Remember, this boxed set is on sale ONLY for the months of January and February and then the price will go back up to $6.99 for quite some time. This is the first and only time this set has been on sale, and I may not do it again. Now is a great time to get the entire trilogy for 99 cents (three full-length complete novels), in order to catch up on the series. Books 4 and 5 come out this year! Click here to see the My Romance Reads ad feature and details.

Have you signed up for my newsletter yet? If not, you can do that easily right here. Click the newsletter link, add a few details, and you'll be eligible for monthly giveaways and advanced notice on my book releases, etc.

That's all for today. Happy Monday! ~Maddie
Posted by Maddie James No comments:
Email ThisBlogThis!Share to TwitterShare to FacebookShare to Pinterest
Labels: #MondayMashup

I hope everyone had a splendid weekend. I did! We practically had a Turner Classic Movie weekend marathon, and I loved every minute of it. Last night we watched Jane Eyre. Oh my, dark and brooding. I love it!

#OnSale -- Still on sale for the months of January and February. This $6.99 regular-priced set is now only $0.99. This is three, full-length time travel novels, all inter-connected stories. Like pirates? Time travel? Love that withstands even the barriers of time? Well look no more. For 99 cents this is a deal you cannot beat! 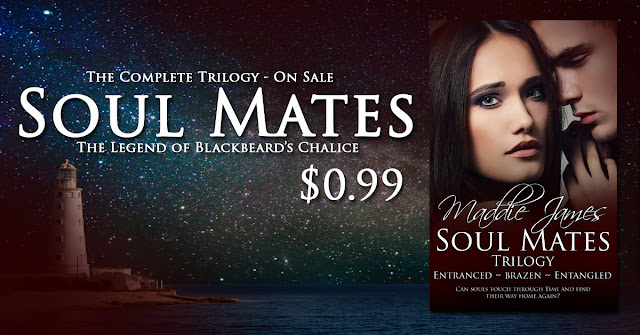 #AmazonGiveaway -- Only one more day to enter to win a print copy of Entangled, book three in the Soul Mates Trilogy above. No purchase necessary. 1 of 2 winners has already been awarded. You could be #2! Click this link to enter. https://giveaway.amazon.com/p/e74b275810307880 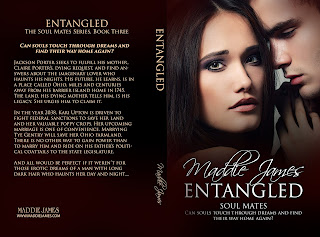 That's it for today. Come back tomorrow for a #TuesdayTeaser! Oh, and one parting thought... 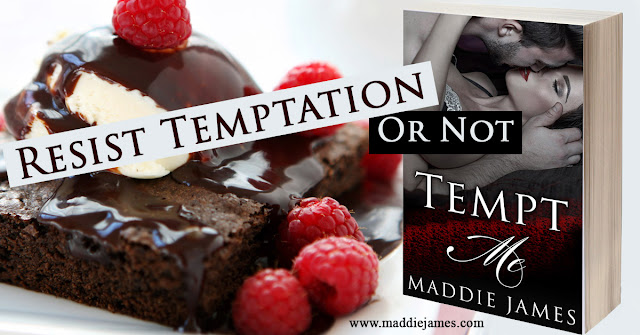 Posted by Maddie James No comments:
Email ThisBlogThis!Share to TwitterShare to FacebookShare to Pinterest
Labels: #MondayMashup 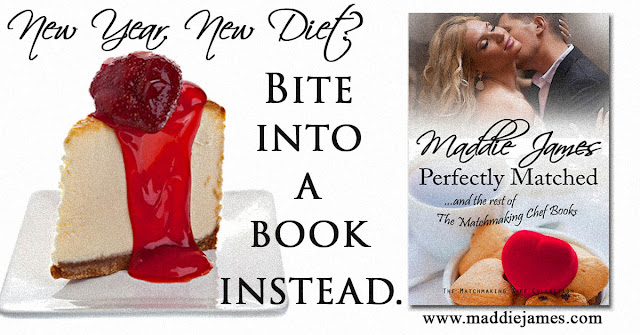 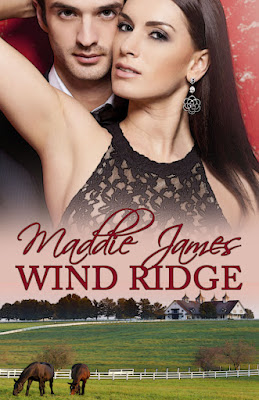 Today's #TuesdayTeaser is from an upcoming book, due to release in late January.

Whew. Now that 2015 is past, let's put that baby to bed and get on with the business of 2016! Even though I wrote 2015 on three documents this morning and had to correct, I'm ready for a new year. I'm betting most of us are.

I like fresh starts. Second chances. Whatever you want to call them. The new year is always an opportunity for those. How are you starting anew this year? 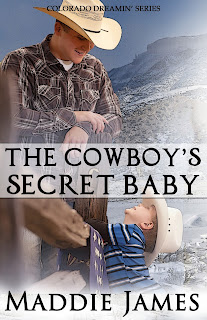 I'm just trying to stay on track with releases and marketing, although I am still playing a little catch-up from 2015. Oh well. Best foot forward!

#CoverReveal. Hey! Check out the new cover for my next up-and-coming cowboy book! The Cowboy's Secret Baby is coming soon. This one was slated for release in December but has been delayed to, well, life. Yeah, it happens. This is the sequel to Rawhide & Roses that many of you have been waiting on.

#Newsletter. My monthly newsletter went out yesterday. If you are not a subscriber, head over to this link and get signed up. I give away a book every month to one of my lucky subscribers! Yesterday's winner was Kathleen Bledsoe. I'll announce this in the February newsletter too. Want to take a peek at yesterday's news? Hit this link.

#Sale! The Soul Mates time travel trilogy is on sale for the months of January and February. Normally priced at $6.99 for these three, full-length connected novels, this is a GREAT deal at $0.99. Grab it while you can at these retailers.

(Note: at the time of this blog post, Barnes and Noble had not yet changed the price, so be sure to check the price there before you purchase.)