And speaking of all tied up, Zeus is one of the spicier books in the series, so if you like 'em hot, here you go. I highly recommend this book! 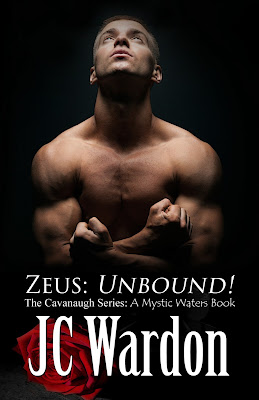 Zeus Cavanaugh Whitehawk can’t afford to relinquish control. Publicly or personally. His body holds powers that can kill, and after years of hunting demons, he feels tainted with the growing darkness in his soul.

Sabia Ilie lost her promised mate and her Lycanthrope pack to the mystical Cavanaugh clan several months earlier, and now the oldest of their sons has taken over her life. He’s a bossy brute, a dark and dangerous demon hunter, but beneath the hard surface, she’s sure there is just a man who struggles to remember his humanity.

The question is… Just how much of her life is she willing to risk losing, to save his?