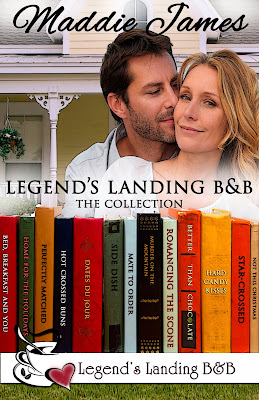 This set includes the 13 stories of the original Legend’s Landing Bed & Breakfast series, including the eight Matchmaking Chef stories, all in one ebook collection!

Bed, Breakfast and You – Chef Suzie Schul tangles with fling from her past only to realize that he’s come to town with a plan—and that plan includes making her his, forever.

Home for the Holidays – When Suzie’s estranged sister Chelly finally comes home for the holidays, Suzie does more than forgive her sister – she sets her up to reconnect with her old high school flame.

Perfectly Matched – Chef Suzie is cooking up more than biscuits when she tries to work matchmaking magic with the town wallflower, and the hunky country music singer who has come to town.

Hot Crossed Buns – What’s a small town cop to do, when the love of his life runs away when he pops the question? He hires a matchmaker to lure her back.

Dates Du Jour – Speed dating? Speed eating is more like it when Suzie tries to matchmake puppy nanny Lyssa Larkin with every available bachelor in town.

Side Dish – When Nora Patterson meets Suzie, the Matchmaking Chef during a book signing at her store, she finagles a matchmaking picnic lunch date for two. But her date seems more interested in her best friend, Becca…

Mate to Order – When Suzie’s success as a matchmaker hits the national scene, about the same time as her debut cooking show, her new producer comes to her with a list of requirements—for a ‘mate to order’ husband.

Murder on the Mountain – Legendarian Kate Carpenter thinks her Tennessee State trooper husband is dead. ATF Agent Michael Lehman knows he is not. When he goes undercover in her Legend Elementary classroom, his mission is to determine how Kate fits in the middle…

Romancing the Scone – Suzie’s cousin Sidney Schul, owner of Sidney’s Sugar High Coffee Stop and Bakery, makes the best damned scones south of the Mason Dixon. All is well until a mysterious stranger stalks her scones, and attempts to romance her out of her famous recipe.

Better Than Chocolate – When chocolatier Scott Matthews escapes to Legend, he wants nothing to do with anything chocolate. New York transplant, Jillian Bass, only wants to start over in a new town with her chocolate shop, Bittersweets. When Scott takes one whiff of her Belgian truffle, all bets are off….

Hard Candy Kisses – New Year’s Eve is just around the corner and Patti Jo Baker has tried every trick in the book to land a date for the annual New Year’s Eve Bash at The Lodge. This includes setting up a kissing booth at the Legend Elementary Winter Carnival….

Star-Crossed – When Jasmine Walker returns to Legend after a fifteen-year absence, she doesn’t expect her troubled teenage past to collide with her well-planned, professional future.

Not This Christmas – Nora Patterson crashes into the back end of Reverend Rock Peterson’s SUV on a snowy Christmas Eve night, and finds herself snowbound with the attractive minister. She’s prayed for someone to share her life—could Rock be the one?
Posted by Maddie James
Email ThisBlogThis!Share to TwitterShare to FacebookShare to Pinterest
Labels: anthology, contemporary romance, sale