Yesterday I shared the news about my latest release, Seducing Sarah. Today I'd like to share one of my favorite scenes with you. Here's a excerpt from my Hell Yeah! Kindle World story, Seducing Sarah. Remember, you can pick up a copy of your very own at Amazon! 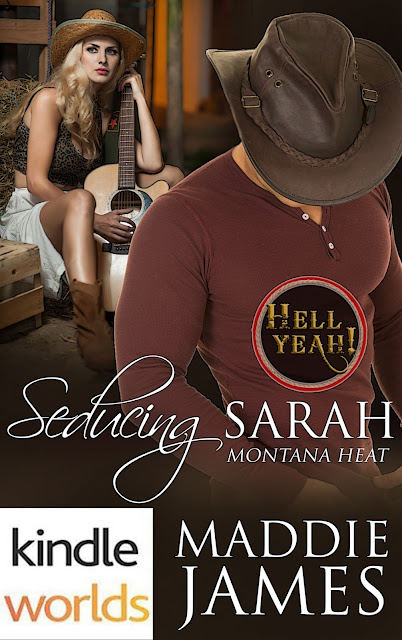 Sarah woke in the same position in which she went to sleep—with her cheek resting against Cole’s
chest, and his arms wrapped snug around her. Not sure how long they had lain there together, she knew it wasn’t long enough. At least for her. She could lay in his arms forever and not complain.

But how was he feeling about all this?

She’d barged into his room like she’d owned the place and never stopped to think that perhaps he had plans. He had just showered—obviously—his skin dewy soft and damp, contradicting the hard plane of his chest, tempting her. The towel wrapped sloppily around his thin hips.

She’d wanted to run away and bury herself in his arms, all at the same time.

But God, what she really wanted was for him to bury himself in her.

Her thoughts shot back to him standing there in the room wearing nothing but a towel. Even in her frantic state of mind, she’d noticed that he was one fine-looking specimen of cowboy. His chest was hard, his stomach flat, with pretty much a six-pack instead of a belly. She liked that. What she’d wished, that she’d been brave enough to slip her hands down under that towel and slide them over his hips to see what else was underneath.

My. She was getting wet just thinking about it.

Cole stirred, and his knee pushed between her thighs. Damn. A little higher and she could almost rub herself up against him nicely and…

Stop it, Sarah. He doesn’t even think of you in that way.

Of course he does. Right?

Her mind drifted back to him in the towel. He’d held her close, and she had felt something then, hadn’t she? Something hard against her lower belly—something hot and yeah…he definitely wanted her.

She smiled against his chest.

But had he planned to simply go to bed—or was he headed out for some nightlife, or perhaps down to the patio to socialize with the others? Maybe that raging hard-on she felt wasn’t even for her. Maybe he had some other chick in the wings.

He’d said he was turning in, but maybe he was just being nice. If he’d had plans, she had definitely stalled them—or had she? 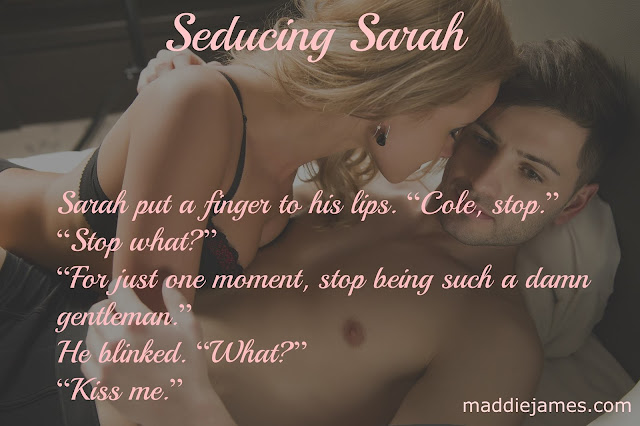 To say she was confused was an understatement. How could she feel so wonderful, so darned quick, with him? She barely knew him, and yet, she was lying in bed with him now, wrapped up into his sinful body, like a human burrito.

This couldn’t happen now. As much as she liked him playing the white knight role, she knew he couldn’t be the one to save her—not from Max and perhaps, from herself. She was naive, a hayseed country girl, as her manager had said. She had no business sense. Heck, six months ago she was waiting tables at a diner in Sturgis, waiting to be discovered.

Then came American Star, and the discovering began. And now here she was—in a pickle of a mess, with no easy way out. At least as far as she could see. And in Cole Steven’s bed. As much as she loved the idea of that, she knew she needed to get a grip on herself and woman-up to face the situation at hand. She should have left this room last night. She shouldn’t even have come in the first place. She shouldn’t have forced herself on him.

And he’d insisted that she stay. With him. Right? So it didn’t sound like he was bothered by the fact he was stuck with her for the evening.

Darn it. She sure hoped he didn’t feel stuck.

Sarah shifted and sighed, snuggling in closer. She would enjoy this for a long as she had it. They really only had the weekend, didn’t they? She wasn’t going to expect anything else. But dammit, there was no reason why she couldn’t let her hair down for a couple of days. Right?

But she didn’t want to send him the wrong message. Did she?

And what would be the wrong message?

She hated one-night stands. She’d heard how her brothers talked about the women they’d hooked up with for a night, and she definitely didn’t want to be one of those women. But this didn’t feel like that, did it? Even though she wanted him to screw her brains out?

Geez. This man-woman thing could be so darned complicated, at times.

But the complication dissolved when Cole cinched his arms around her a little tighter. Something about the way he tucked her up into his long body, like he was claiming her—leg thrown over hers now, and everything—made her feel warm and secure and happy.

And still a mite confused
.
In fact, if she let herself, she might bubble over with the thought of how happy she felt when she was around him—while she was running down the hallway of this huge house screaming in fear of the unknown.

But he was awful nice. A great guy, it seemed. Kind, considerate, protective. Sexy. Hell yeah. Sexy… A gentleman. In her extremely limited experience being around him, that is....

Cole was different from most men she knew.

“Such a gentleman,” she whispered.

After a moment, he returned sleepily. “I sure hope so.”

“No chance.” She nuzzled against him with her cheek and snaked her arm around his waist to hug him. “I’m glad you’re a gentleman.”

He sighed. “If you knew the thoughts rolling through my head right now, you might not think I’m much of a gentleman….”

He shifted and scooted back a little, and grinning, Sarah lifted her face to look into his. He smiled back and kissed the end of her nose. “You’re safe with me, Sarah McClendon. I have no plans to seduce you this morning.”

This morning? What about later?

“Rain check?” Sarah mentally slapped herself upside the head. What was she thinking? A small thrill raced up through her and she felt the corner of her mouth tip up. Oh my.

Colt jerked his head back and laughed. “You, little lady, don’t want to go there. Not right now.”

Sarah jutted out her lower lip.

Cole groaned. “Seriously Sarah. I had no idea you were such a tease and as much as I love that…” He perched himself up on one elbow and washed a hand over his face. “As much as I love a tease, don’t be offended if I don’t deliver.”

Sarah sat up. “There you go again,” she said. “Ever the gentleman.”

“Yes, ma’am,” he continued, touching her cheek and peering into her eyes. “I don’t know how to be any other way. My dad was a good, hardworking, honest man, and I try to live up to who he was, every single day. I lost him way too early, but I’ve never forgotten how he treated people—and especially women—and how he treated me.”

“I imagine you are a lot like him then.”

“Ummm.” She stretched a little. “I don’t know you very well but I do know that you are a good man. I trust you.”

Cole palmed her face in his big hand. She looked into his eyes and watched his gaze play over her. “Sarah,” he began, “You’re right. We don’t know each other very well…”

“And yet,” she added, “here we are in bed together.” She giggled. She liked talking with him and giggling and teasing while they were in bed. It sure beat the heck out of how she was feeling last night. And it sure did counter her confused thoughts from a few minutes ago.

She was being intentionally flirty, and she should stop.

“No you shouldn’t. You slept right where I needed you to be.” She paused and searched his face. “Cole, I needed you, and you were here. That means a lot.”

“Sarah, I am right where I needed to be.” He briefly closed his eyes and exhaled, then opened them again. “I never want to take advantage of you. I don’t want to move too fast. I don’t want this to be the only weekend we have together. I…”

“For just one moment, stop being such a damn gentleman.”

Get all of the Hell Yeah! Kindle World books here!