Tuesday Teaser - My Once and Future Love by Ruth Kaufman 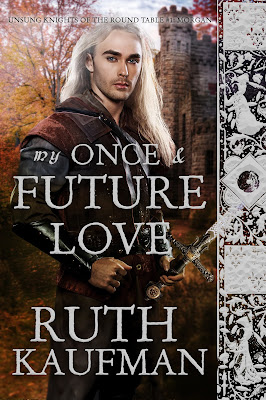 Annora of Amberton flees her castle to seek proof that she’s not a lunatic as her uncle declared when claiming wardship over her and her lands. Morgan ap Myrddin must rescue his father, Merlin, from imprisonment. But enemies have wounded him, draining his powers.
He stumbles upon her cottage and enlists her aid. As he helps protect her from her uncle’s schemes in return, undeniable desire and respect spark. But he won’t succumb to the lure of a mortal woman as his father did. She’s wary of caring for a man who refuses to discuss his past. When he finally tells her he’s a Knight of the Round Table, she fears he’s the lunatic as danger, secrets and destiny thwart the power of love. Flames of agony seared Morgan ap Myrddin. Blood, crimson as the dragon on his long-lost banner, streamed down his side, soaking remnants of the shirt pressed against his arrow wound to staunch the flow. He sped through the forest, cracking branches in his haste.
Heart pounding hard as a hammer on an anvil, he caught his breath behind a wide oak and leaned heavily on the rough bark. Amidst a shower of autumn leaves, he closed his eyes to focus his dwindling strength and energy on listening. What he sought lay beyond the wind swishing through the trees.
He sought the footsteps of his enemies.
Morgan’s ears, keener than those of any mortal man’s, strained to capture the distant sounds of an army on the move. The faint rumble, the subtle shaking of the ground beneath his feet told him what he needed to know. His enemies approached.
Never before, in thirty-two mortal years fraught with danger, had he come so close to being trapped.
Closing his eyes, he raised his arms to summon aid, to call upon his vast powers.
Nothing happened. Nothing changed.
Icy needles of unfamiliar fear pierced him. “Taliesin preserve me,” he breathed.
No answer. His Mysteries had faded so, he couldn’t even hear the wisdom of his ancestors.
Morgan ran. He stumbled into a tree, dizzy from loss of blood. He had to move faster or they would capture him.
And his father would remain imprisoned for all eternity. 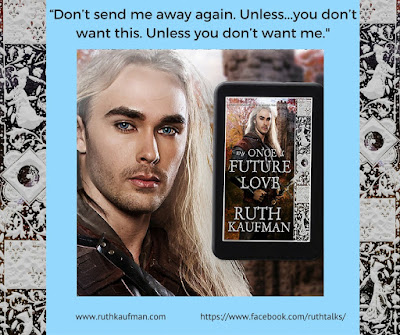