Today's Release -- All of My Heart, a Harbor Falls Romance


All releases are $0.99 during pre-order and release week. Grab them now! 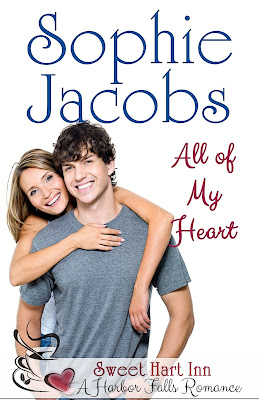 ALL OF MY HEART
A Harbor Falls Romance, Book 1: Sweet Hart Inn

Suzie Hart has it all. A beautiful home, friends and family, and the sweetest job in the world. She's the best darned cook in Harbor Falls, North Carolina, or so she's been told, and she has the street cred to prove it. She runs her own bed and breakfast inn, has written a cookbook, conducts cooking classes, food blogs every week, and caters for local special events and holidays. Life is perfect. Right?

Wrong. You see, happy-go-lucky Suzie has a secret. And all is well until that secret rides up to her doorstep on a bad-ass Harley and tosses her not-so-perfect little world into some kind of big, bad tumble.

Brad Matthews doesn't have a secret, he has a plan--and that plan includes luring Suzie back into his life. When she worked as his sous chef in Asheville, he had no intention of falling in love with the sassy chef, or any other woman for that matter. No room in his life for romance. But when Suzie disappeared and took Brad's heart with her, his good intentions shattered. Now that he's found her again, he's not about to let her alter the new path he's set out for his life--and hers.

Read a Preview at Amazon!