Tame My Heart is set to release on February 27. Would you like to read a sneak peek? You would? Awesome. Here you go! 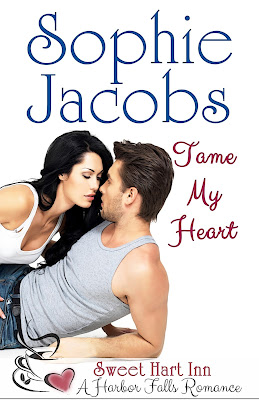 What’s a small town cop to do when the love of his life runs away when he pops the question?

Katie Long is not about to be saddled with commitment. She has dreams, plans, and she’s working hard to fulfill them. Her relationship with local Harbor Falls police officer Chris Marks is fine just the way it is. Why does he think they need to change it up?

She knows why. She just doesn’t want to deal with reality.

But when Chris pops the question, reality hits her square in the face and she panics. After Chris exhausts all hope of reasoning with Katie, he hires Suzie Hart to set him up with a romantic dinner for two, hoping she will work some of her matchmaking magic. Suzie does all she can to set the mood but Katie isn’t about to be wooed. Then Suzie learns something about Katie and supplies Chris with a couple of items that might tame her wild heart, after all.

Katie Long’s fingers trembled even though she had a death-grip on the steering wheel. White knuckles popped through the flush of her skin. Her heart was about to beat out of her chest and an icky, nauseous feeling was creeping into her stomach. Dammit. She felt flushed and clammy all at the same time, heat shooting from her cheeks all the way down to the tips of her fingers and toes. Cold chills simultaneously rippled across her back. She was madder than hell.
Get it under control, Katie!
Her sight blurred and she shook her head in an attempt to clear the glaze from her eyes. Not happening. With a quick gasp, she gunned the engine of her Mustang GT and whipped to a pull-off on the side of the road, gravel arcing behind her as she narrowly avoided a culvert.
“Damn backcountry mountain road,” she sputtered.
She pressed the brake—much too hard, her body jolted forward with the rapid stopping of the vehicle—simultaneously avoiding bumping into the rock wall of the overlook. Letting out a ragged sob, she whacked her forehead on the steering wheel. She was tempted to bang her stupid brain against it.
Repeatedly.

Just in case repentance did come with beating one’s head up against something hard, she gave her forehead a good hit at the thing.
“Ow. Dammit.” She leaned in and rested her forehead against the cool steering wheel and for a moment, just breathed. In. Out. In. Out. The even breathing seemed to settle her stomach a little. Good. Last thing she wanted to do right now was puke.
At least she’d gotten out of Harbor Falls before she totally lost it. Wouldn’t do to have anyone see her cry. To have him see her cry.
The sonofabitch.
Then the tears rolled. Her hands shook, her heart jumped out of her chest, and her brain spun. My God, was she experiencing a slow, tortuous unraveling? Then what the hell, she let loose with a steady stream of sobs. Tears spilled. So unlike her.
She was Katie Long!
She didn’t cry.
She was tough.
Wild.
Crazy.
Left the boys and made them cry.
Lifting her head, she leaned back against the headrest and at last switched off the engine. Her gaze drifted over the lazy, hazy backdrop of the Blue Ridge Mountains spanning the horizon before her. Dusk was in the process of settling in the mountains with sunset happening behind her. A purplish glow of light and shadows danced in the hollows and valleys of the landscape before her.
No doubt the mountains were beautiful any time of day, and right now was no exception, but she could barely see the beauty beyond the fear in her heart that was slowly coloring everything off-hue.
She swallowed, exhaled, and tried hard to let the scenery capture her. After a few moments, her breathing slowed again and her chest stopped hurting so much. She gulped back a couple of errant sobs and swiped at her runny nose. Then closing her gritty eyes in an attempt to slow the circling images and thoughts running through her head, she tried to concentrate, to think through what had just happened.
Chris had turned the tables on her, that’s what had happened.
She’d thought they were out for a night of dirty movies, monkey sex, and pizza. Instead, Chris had gone and done something stupid. Why did he have to ruin a perfectly good Saturday night? Dirty movies and sex had been their ritual for months. Their relationship had been fun, erotic, and flirty—and sometimes a little risky and kinky—but they both loved every minute of it. Katie was thrilled with the no-talk-of-permanency agreement and attitude of the younger-than-her police officer who enjoyed pleasing her sexually, in all the right ways and hitting every one of her buttons.
Why the shit had he gone all goody-two-shoes on her?
So unexpected.
Letting go of another long breath, she blinked and stared again over the dim horizon. What was she going to do now?
God, she must look a mess. She grasped the rearview mirror and angled it toward her, catching a ray of leftover sunlight. “Oh, good Lord in Heaven.” Her face was splotched, shiny, and smudged in all the wrong places. Was that snot stringing back toward her ear? Gross.
“Damn you, Chris Marks,” she whispered while rummaging for a napkin or a used tissue or something in the glove box to wipe the mucus out of her hair. “This is entirely your fault. We could be experiencing orgasmic pleasure at this very moment and you had to go and ruin it all.”
She found a tissue and dabbed at her eyes. “That’ll teach you to ask me to marry you.” Then she looked back into the mirror again and shook her head in disbelief and confusion.
He had asked her to marry him.
Got down on one knee.
Even had a ring.
Goddamn him!
Had he forgotten that she didn’t want to settle down? That she didn’t want the picket fence and two-point-five kids and the dog and mini-van lifestyle? Hadn’t she made that quite clear? Didn’t he remember that she had plans for her life that may, or may not, include him?
No. He didn’t know about the plans because she’d never told him about her plans. Or her dreams and goals for the future.
Because those were her plans. Personal. And she didn’t want him to know.
She just wanted a monkey sex and dirty movies kind of relationship. She wasn’t the happily-ever-after type and that had been fine with him for months—but suddenly, obviously, he was the happily-ever-type? What the hell?
“Damn you, Chris,” she sputtered again while dabbing at her face, “for going above and beyond the call of duty and doing the right thing.” She sniffed and stared at the reflection of her eyes. “Thank you but no thank you.”